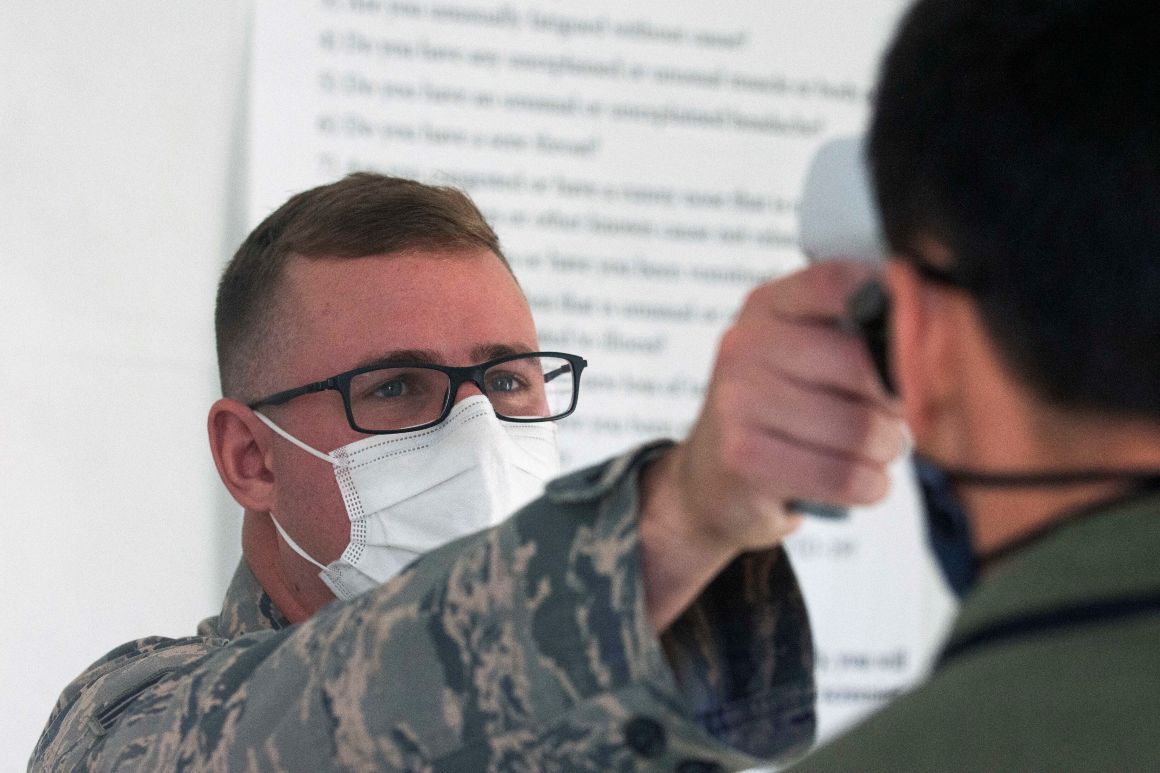 A member of the Nevada National Guard performs a temperature check during the second day of the 32nd Special Session of the Legislature on Saturday, Aug. 1. | David Calvert/Nevada Independent via AP, Pool

States are preparing to pull thousands of National Guard troops off the front lines of coronavirus relief efforts with federal funding set to expire later this month and no response from the White House on governors’ pleas to extend the deployments for the rest of the year.

Federal support for the Guard response to the public health crisis is set to end on Aug. 21. That means states will have had to pull Guard personnel from their duties by Aug. 7 to give them two weeks to quarantine before returning to their home communities.

While some states, including Washington and Arizona, have vowed to fully fund the troops’ missions with state dollars if federal support disappears, other states cannot afford to do so. Nevada, for example, will be able to fund only a third of the Guard members who’ve been federally deployed, meaning their testing and contact tracing work will be significantly scaled back while other services — such as distributing food to low-income schoolchildren and delivering masks and gloves to nursing homes — will cease entirely.

On Monday, the National Governors Association released a statement slamming the administration for “unnecessary delays” that are creating “significant challenges for states and territories, which are amplified in the middle of a crisis.”

“Short-term extensions and last-minute authorizations are adversely impacting and disrupting state plans and operations,” they wrote.

“Every day counts,” said one Defense official, who requested anonymity to speak about ongoing discussions. “We are getting very close to when all the guardsmen and women have to start shutting down.”

Both the Pentagon and FEMA have endorsed states’ request for the extension.

The White House did not respond to POLITICO about whether or when an extension would be granted by President Donald Trump. But an administration official, who was not authorized to speak publicly, said it “should be happening ASAP.”

State officials and lawmakers have been pressing the White House and Defense Department for months for an extension of the troops’ federal status, maintaining that as the virus surges across dozens of states, they cannot support the Guard members who have been running virus testing sites, assisting with contact tracing, building field hospitals, sanitizing nursing homes and stocking food banks.

As of Aug. 3, more than 24,900 Air and Army National Guard personnel in 50 states, three territories and the District of Columbia were deployed as part of the Covid-19 response, according to a Guard spokesperson.

The Guard is currently operating under what’s known as Title 32, meaning governors are in command of their state’s members, but the federal government is footing the bill. While states could keep troops deployed even if the federal mission is terminated, they would have to pick up the tab — as much as $9 million per month for every 1,000 troops, according to the National Conference of State Legislatures. Guard members also can’t accrue federal retirement, education and other benefits while on state status, and also would lose access to their comprehensive military health insurance.

States could redeploy some of the same troops who have been working for months on the pandemic response but have to give them the opportunity to take all the paid leave they’ve earned this year. That means they may need to find people to take their place for several weeks to avoid a lapse in services as the virus continues to spread.

Over the weekend, some states already began transitioning their Guard members from federal to state duty. That means demobilizing hundreds of troops who have been working on testing, contact tracing and other public health efforts and training people to take their place.

“Right now, we’re doing about 25 percent of the state’s testing,” said Brig. Gen. Michael Hanifan, assistant adjutant general of the Nevada Army National Guard. “That will drop off entirely this week [because of demobilization process], and if we come back on state active duty, it will be a third of what it was. We were some of the only people in the state testing people who are asymptomatic, and who live in rural and tribal communities, and a lot of that will just not be able to happen.”

Even if the White House announced an extension this week, he said, it will take them a week or more to “ramp back up,” during which services would be limited.

“Some people have already made plans to go back to their civilian employers or to school, so we have to recruit new people for those positions,” he said.

In a document shared with POLITICO, Washington state estimates that it will have no choice but to come up with from $15 million to $20 million per month to keep 1,000 Guard members deployed if federal support expires.

“A total lack of leadership by the White House has put states in an impossible situation,” said Casey Katims, federal liaison for Democratic Gov. Jay Inslee, who this weekend began preparing for a lapse in federal funding and training 300 new Guard members to fill in for those who do plan to take the leave they’ve accrued. “There is no justifiable reason for the president’s delay.”

One explanation for the White House delay is the “precedent-setting” nature of the decision, said the defense official. Extending the National Guard deployment through December would amount to the longest the Guard has ever been deployed on federal duty for a national emergency, surpassing the deployment for Hurricane Katrina in 2005.

Still, state leaders told POLITICO that the ongoing uncertainty is hurting residents who may lose access to their testing and food distribution services, as well as the Guard members themselves.

“Those individual soldiers and airmen have outside jobs and families, and they didn’t know whether to tell their employers and their spouses that they’ll be off-mission as of next Thursday or continuing duty until the end of December,” said Maj. Gen. Matt Quinn, president of the Adjutants General Association of the United States and head of the National Guard in Montana. “That’s a horrible position to put them in.”

Quinn said he is currently warning all Guard members in his state, including those supporting testing and contact tracing on Native American reservations, that they should prepare to “pull up stakes” if an extension is not approved.

It is not the first time that the administration’s handling of the Guard deployment has drawn criticism from governors, lawmakers and administration officials.

Earlier this year, POLITICO revealed plans to end the National Guard’s federal authority on June 24 — just a day before thousands of Guard members would have qualified for various retirement and education benefits as a result of their deployment.

On a May 12 interagency call, top administration emergency management officials acknowledged the benefits cutoff and the hardship states would face if they lost funding the troops.

The White House, under pressure, extended the deployment until late August. Guard members have now qualified for their benefits, but recent surges in cases, hospitalizations and deaths have prompted states to petition for a longer deployment.

Many state and federal elected officials have aired their frustrations in recent days over the White House’s months of silence on an extension.

“49 states have asked for this,” House Armed Services Chair Adam Smith (D-Wash.) tweeted at the president and vice president on Friday. “Your delay hurts our #COVID19 response & Nat’l Guard members.”

Daniel Lippman contributed to this report.