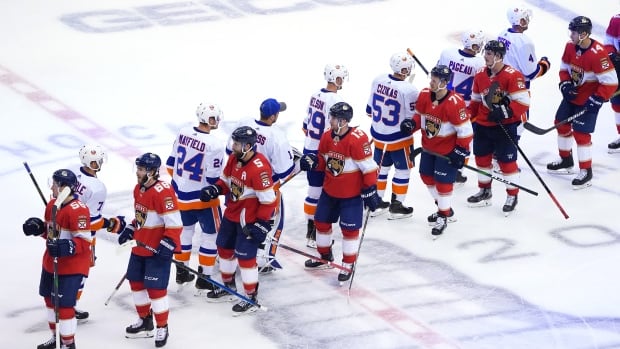 Brock Nelson and Mathew Barzal had a goal and assist each in a game the Islanders never trailed. Defenceman Ryan Pulock made a diving stick save to prevent Florida’s Aleksander Barkov from scoring into an open side to maintain New York’s 3-1 lead midway through the second period.

Semyon Varlamov stopped 24 shots, Jean-Gabriel Pageau scored an empty-netter, and the Eastern Conference’s seventh-seeded Islanders bounced back from a 3-2 loss in Game 3 on Wednesday.

New York will open the best-of-seven first-round series against a yet to be determined opponent next week.

Anthony Beauvillier scored the first two goals in the New York Islanders 5-1 win as they eliminated the Florida Panthers in four games. 0:52

The 10th-seeded Panthers wound up one-and-done for their fifth consecutive post-season appearance, and eliminated for the second straight time by the Islanders. New York needed six games to eliminate the Panthers in a best-of-seven first-round series in 2016.

WATCH | 9 takeaways in 90 seconds from the first week of NHL playoffs: