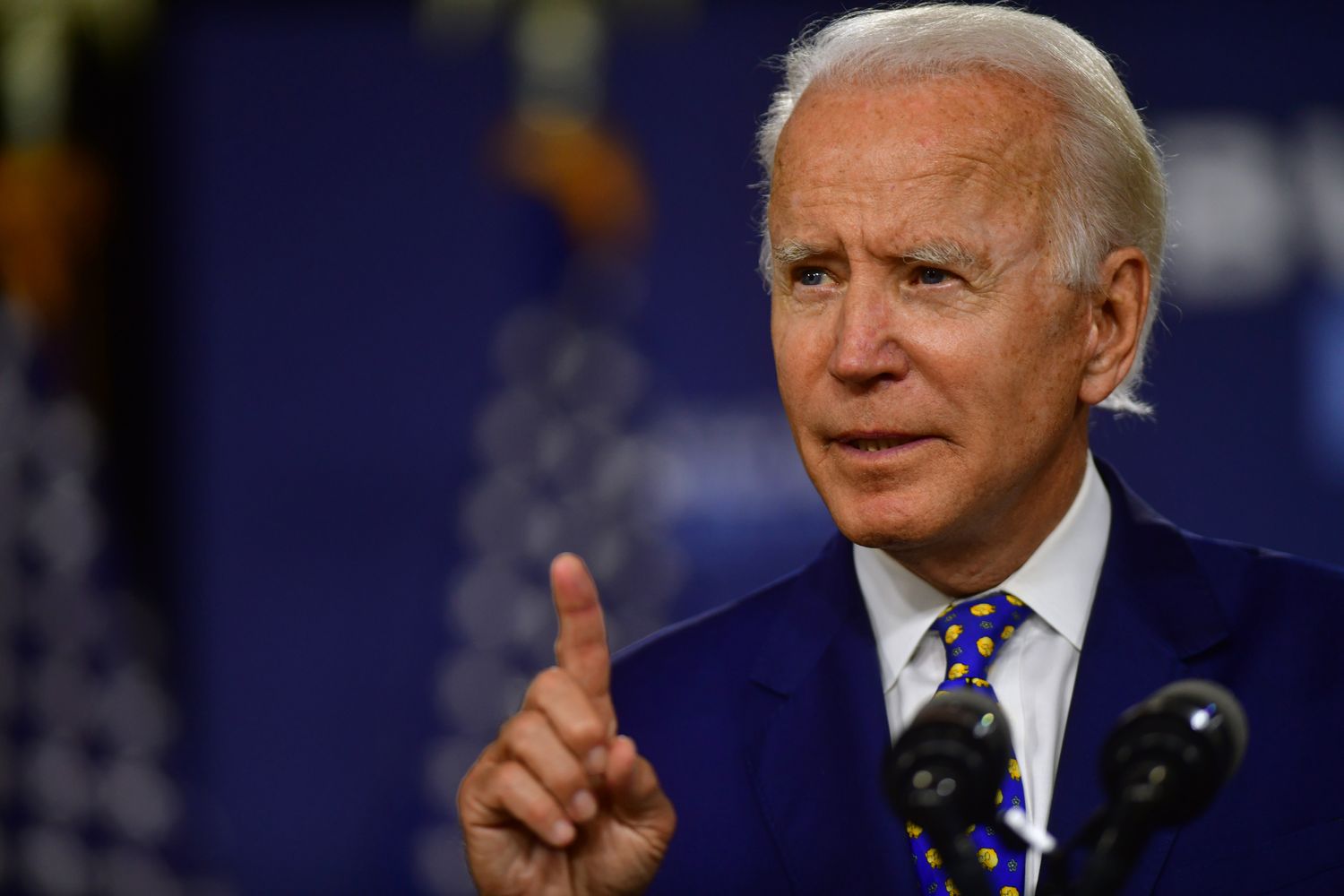 Joe Biden has promised to put “U.S. diplomacy back in the hands of genuine professionals.”

But as the former vice president hauls in piles of campaign cash, bringing him close to parity for the first time with President Donald Trump, some Democrats and veteran diplomats are asking if Biden really means it.

The presumptive Democratic nominee has refused to rule out giving ambassadorships to big-time campaign donors and fundraisers. Instead, he’s indicated that, if he wins the presidency, he’ll continue the longstanding, bipartisan practice, which critics for decades have said smacks of corruption and damages America’s international standing.

“As a principle, I strongly disagree with the idea that, if you give money during the campaign, you’ll be rewarded with a job later,” said Michael McFaul, who served as U.S. ambassador to Russia during the Obama administration. “Most certainly at this moment in time, when morale has been incredibly eroded in the Foreign Service, it doesn’t send the right signal.”

The Biden campaign declined to cooperate on this story, and it would not answer questions about whether it had any upcoming announcements on ambassadorships or specifics on how exactly it plans to reinvigorate U.S. diplomacy.

But when Biden was asked about the ambassadorship issue in December, he wouldn’t rule out giving the roles to big-time donors and bundlers. He insisted, however, that anyone he appoints would be qualified for the job.

“I’m going to appoint the best people possible,” the former vice president said at the time. “Nobody, in fact, will be appointed by me based on anything they contributed.”

Presidential candidates often promise to appoint the most qualified people to top jobs. Yet once in office, they find that a cozy embassy spot offers an appealing way to reward moneyed supporters. How much harm could they really do, the thinking goes? Obama doled out ambassadorships to dozens of campaign donors, while Trump has taken the practice to new extremes.

So Biden’s vague assurances do not comfort foreign policy veterans hoping he will seize the moment to make a paradigm shift.

“We criticize Trump endlessly for using tools of the state for his own personal political gain at the cost of our national interest,” said Elizabeth Shackelford, a former U.S. diplomat who resigned from the Foreign Service in protest of Trump administration policies. “And if we’re being honest, appointing high-dollar donors to ambassadorships can only fairly be described as this type of activity. This is the time to show leadership on that front.”

Several of Trump’s donor-ambassadors have embroiled the administration in scandal, highlighting the perils of relying on amateur diplomats.

Chief among them is Gordon Sondland, Trump’s now-ousted ambassador to the European Union, who was nominated to the post after donating $1 million to Trump’s inauguration. Sondland, a wealthy hotelier, became a key figure in the Ukraine affair that led to Trump’s impeachment trial and subsequent acquittal when he began coloring outside the lines of usual State Department diplomatic procedure.

Last month, reports emerged that New York Jets owner Woody Johnson, a Trump donor now serving as the U.S. ambassador in Britain, faces accusations of racism and sexism. He’s also alleged to have acted on a Trump request to try to convince the United Kingdom to move the British Open to a Trump golf property. Johnson has denied wrongdoing.

Also recently, CBS News reported that the U.S. ambassador to Iceland, Trump donor Jeffrey Ross Gunter, had asked to carry a gun in the unusually safe country and cycled through several deputies in a matter of months. Amid the coronavirus pandemic, Gunter tried to do the job from California instead of Reykjavik, returning only after Secretary of State Mike Pompeo insisted, CBS reported.

One reason career U.S. diplomats had hoped Biden would take a bolder stance on ambassadors is that one of his rivals in the Democratic primary, Sen. Elizabeth Warren of Massachusetts, did so.

“I won’t give ambassadorial posts to wealthy donors or bundlers – period,” Warren said in a plan she released about rebuilding the State Department. She called on the other candidates to commit to the same ideal. Biden demurred.

By not taking a position similar to Warren’s, current and former U.S. officials said, Biden is indicating he’s a creature of old Washington habits.

Most of the dozen current and former U.S. officials and diplomats approached for this story declined to go on the record. Some are hoping to get positions in a Biden administration and are wary of upsetting him or his aides. Some are so desperate to defeat the Republican incumbent in the White House that they don’t think it’s worth slapping Biden with the issue of ambassadors given everything else they say is at stake.

“We’re all just so shell-shocked by Trump,” a former U.S. ambassador said.

But even as current and former diplomats say they doubt Biden will set a new standard and not hand out ambassadorships to the rich, they are more hopeful that he will at least reduce the number of berths given to people who are not in the Foreign Service.

Prior to Trump, most modern presidents gave around 70 percent of ambassadorships to the Foreign Service’s career diplomats, and 30 percent to outside political appointees, including wealthy donors. Trump is on track to devote more than 40 percent of positions to outsiders, according to statistics from the American Foreign Service Association (AFSA), a union representing U.S. diplomats.

AFSA President Eric Rubin said Biden should follow the requirements of the Foreign Service Act of 1980, which he noted indicates that “political appointments as ambassador should be rare, and that all nominees must be fully qualified. That is the law of the land.”

But few presidents have paid attention to the nuances of that law. Even Obama, who promised to bring hope and change to Washington, was unable to escape the money-to-ambassadorship trap. He nominated dozens of high-dollar donors and fundraisers to posts overseas. Some proved very good. Others did not fare well; some had to resign amid allegations of poor management.

Generally speaking, U.S. diplomats say they are fine with an administration that taps some outside experts as political appointees for ambassadorships.

McFaul is often cited as such an example: He’s a student of Russia who was viewed as a solid envoy in a difficult post. He was not a major donor to Obama, and, prior to being named ambassador, he served as senior director for Russian and Eurasian affairs at the National Security Council.

Some current and former diplomats said they’d like to see the percentage of political appointees fall as low as 10 percent, if not zero. Few thought that was realistic, though, despite the desire for radical change following the Trump years.

The United States is unusual in how it hands out ambassadorships; most advanced democracies rely almost exclusively on trained career diplomats.

Several current and former U.S. diplomats stressed that their opposition to naming campaign donors as ambassadors didn’t extend to people who gave small sums. But while they admitted that there are some high-dollar donors and fundraisers who may also be qualified to serve as an ambassador, some argued that the mere perception that they bought the seat means they should be barred.

At the same time, a few pointed to a surprising reason it can be helpful to have a wealthy person placed in certain ambassadorships: Unlike most career diplomats, high-dollar donors can afford to throw lavish parties and otherwise entertain guests in expensive posts like London and Paris. The State Department’s meager budget can’t cover what’s needed to schmooze foreign diplomats, so wealthy envoys tap their own personal funds.

Typically, the tough, unglamorous posts – especially those in Africa and parts of Asia – are handed to the career professionals, while posh ambassadorships in Europe and more developed regions are given to top donors and fundraisers.

Some foreign countries may find it helpful to have political appointees as the U.S. ambassador, especially if such envoys can more easily dial up the Oval Office. Critics, however, said that speaks to longstanding flaws in how the U.S. tackles foreign policy – a system that appears to value connections more than merit and need.

“It gets to a fundamental brokenness,” said Stephen Miles, executive director of the advocacy group Win Without War. “The reality is that the ambassadors who probably most need to talk to the president are the ones in hot spots like Baghdad or Kabul, and that’s not going to be the political donors.”

In all fairness, the system dates to the early days of the republic. Benjamin Franklin, after all, fell into the political appointee category when he was U.S. ambassador to France.

But Miles and other progressives who have been pressing Biden on multiple fronts to break with past habits say it’s long past time to rethink
what’s always been done.

Deciding not to give ambassadorships to big donors and fundraisers is, relatively speaking, an easy move. It doesn’t require legislation or an executive order or convincing a large constituency. It’s just Biden’s choice.

And his unwillingness to make that choice has perplexed U.S. diplomatic veterans, some of whom ask versions of, If not now, when?

They note that, as a recently released report by the Democratic staff of the Senate Foreign Relations Committee argues, Foreign Service and Civil Service officers at the State Department are in crisis under Trump.

“Employees report that their morale and their confidence in their senior leaders, have dropped precipitously,” read the report, which cited surveys, news reports and other sources. “Many are far more fearful today than they were three years ago to report a violation of law, and are
equally afraid they will be subjected to reprisal.”

Under Trump, lingering vacancies across the State Department, hiring freezes and the administration’s distrust of career government staffers have meant fewer chances for Foreign Service members to advance, several of the diplomats pointed out.

If Biden is serious about reinvigorating U.S. diplomacy as he claims, he needs to show to career diplomats that they will have more opportunities, they said.

“If you want to rebuild the State Department you have to make sure that your senior Foreign Service officers have legitimate possibilities to make ambassador,” one senior U.S. diplomat said. “That’s the acknowledged culmination of a successful career and the possibility helps motivate excellence throughout the ranks – though it’s not the only reason, of course.”

A former U.S. diplomat put it more bluntly: “It’s totally un-American to have people slave away for years to gain the skills to do this and others just write a check and show up.”