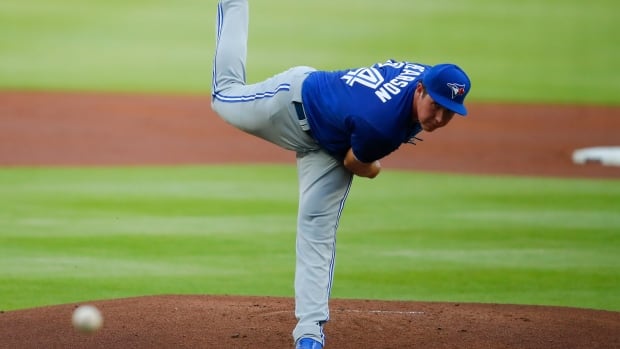 Nick Markakis capped his first start of the season with a game-ending home run in the ninth inning that lifted Atlanta to a 4-3 win over the Toronto Blue Jays on Thursday night.

Days after opting back into the season after stepping away due to coronavirus concerns, Markakis lined the one-out homer off Wilmer Font (0-1) that carried into the restaurant behind the right-field stands.

Markakis was added to the active roster on Wednesday after changing his mind about sitting out the year.

Following the homer, Atlanta players circled home plate with plenty of distance, waving their hands in the air as Markakis finished his trot.

WATCH | Virus continues to cause concern amid MLB’s return:

Less than a week after Major League Baseball returned, a COVID-19 outbreak among the Miami Marlins is raising alarm bells about MLB’s strategy, along with accusations that the league dropped the ball by allowing teams to travel in the first place. 2:02

Bo Bichette hit a homer in the fourth for the Blue Jays.

Right-hander Touki Toussaint gave the depleted Atlanta rotation a boost by setting career highs with his 6 2/3 innings and nine strikeouts.

Toussaint left the game with a 3-2 lead, but Blue Jays pinch-hitter Teoscar Hernandez singled up the middle off Tyler Matzek to drive in Rowdy Tellez to tie the game. Toussaint gave up four hits and three runs with no walks.

Marcell Ozuna didn’t look happy when a 96 mph fastball from Pearson sailed above his head in the fourth. Ozuna answered by lining a single to left field with an exit velocity of 110 mph.

Ozuna moved to second on Pearson’s wild pitch to Nick Markakis, whose grounder to first advanced Ozuna to third. Adam Duvall’s fly ball to left field drove in Ozuna for a 3-1 lead.

An apparent roster snafu forced the Blue Jays to change their pitching plans for Thursday night’s game against Atlanta.

As Waguespack walked to the mound, he was greeted by home plate umpire Alan Porter, who apparently delivered some bad news: The right-hander wasn’t on the 28-man active roster for the game.

The Blue Jays optioned Waguespack and infielder Santiago Espinal to the team’s alternate training site on Thursday to reach the 28-man roster limit.

Montoyo told reporters before the game Waguespack had been recalled when right-hander Trent Thornton was placed on the 10-day injured list with right elbow inflammation. That move apparently was not processed, leaving Waguespack off the active roster.

Waguespack walked to the dugout and Montoyo brought in Rafael Dolis as the official replacement for Pearson.