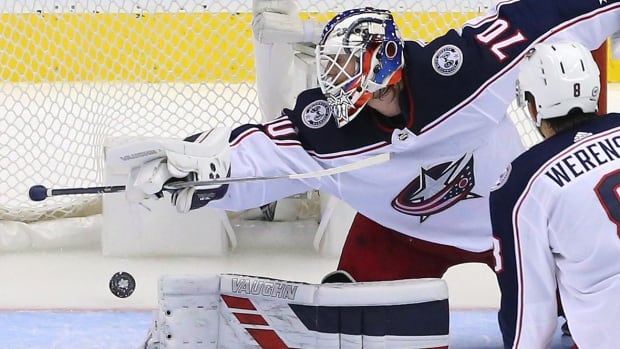 The Columbus Blue Jackets are going back to Joonas Korpisalo in net against the Toronto Maple Leafs for Game 5 of their best-of-five qualifying series Sunday.

The Maple Leafs forced a deciding fifth game in the series with a 4-3 comeback win in overtime on Friday, with Elvis Merzlikins in net for Columbus. Merzlikins allowed three goals in the final 3:57 as Toronto tied the game.

Korpisalo started the first three games of the best-of-five, but was pulled for Merzlikins midway through the second period of Game 3 after allowing three goals on 15 shots. Columbus rallied from a three-goal deficit to win that game in overtime.

Korpisalo shut out the Maple Leafs in Game 1, and allowed two goals in Columbus’s Game 2 loss.

The winner of Sunday’s game will play the Tampa Bay Lightning in the first round of the Stanley Cup playoffs.

Auston Matthews snapped home the overtime winner to put a stamp on an insane 4-3 Maple Leafs comeback victory over the Blue Jackets. Toronto and Columbus will face off Sunday in Game 5. 1:46