Early Thursday, Belle Park campers say three police officers and three city staff members handed out written reminders to those living at the park that read, “camping at Belle Park is no longer allowed” and noted that services would soon be taken away from the park.

The city confirmed that CAO Lanie Hurdle, Housing and Social Services Director Ruth Noordegraaf and representatives from community partners met with those currently camping in Belle Park on Thursday morning.

“The purpose of the visit was to individually reiterate the options available, discuss transition and provide the attached information,” the CAO’s office said.

A homeless camp has been growing at the Montreal Street park throughout the novel coronavirus pandemic, with city council repeatedly voting to evict the campers, and then pushing forward the date due to a lack of other housing options.

Read more: City of Kingston confirms it will not be enforcing evictions at Belle Park on July 31

But the official eviction deadline was last Friday, July 31, which the city says was “formally waived” in order to allow for a more gradual transition of campers out of the park.

The city has always maintained it would not forcibly remove anyone from the park, but it previously noted services afforded to the campers would be taken away or shut off July 31, such as the portable washrooms, garbage collection and power. As of Thursday, those services still remain.

In a news release sent out Friday, the city said campers were to be afforded another two weeks of services while city staff and community partners transitioned people away from the park.

On Thursday, the written notices handed out to campers made it clear that some services would be taken away within the week, and that the city would be working to move campers to other housing options, namely the new 24/7 shelter at Artillery Park, the Kingston Youth Shelter on Lower Union Street and the In From the Cold Emergency Shelter on Montreal Street.

Also on Thursday, Home Base Housing announced the In From the Cold Emergency Shelter, which had previously been moved to the old Fairfield Manor East location to allow for more social distancing, has been moved back to the Montreal Street location. This, according to Home Base Housing, has meant the loss of 34 beds in congregate living, something Home Base Housing called “not ideal.”

Currently, the Montreal Street location only has 13 beds, equating to a loss of 21 shelter beds, which means there are fewer beds available for the 40 or so campers at Belle Park.

“It is hoped the gymnasium at Artillery Park can accommodate the overflow,” a news release from Home Base Housing said.

Nevertheless, several campers and advocates have taken issue with the Artillery Park shelter, since it does not offer permanent housing to campers, who say they can keep their belongings in one place in their camps at Belle Park.

According to the city notice, those who use the Artillery Park shelter will have access to 35-gallon lockable storage bins, in order to address some campers’ concerns about personal items. 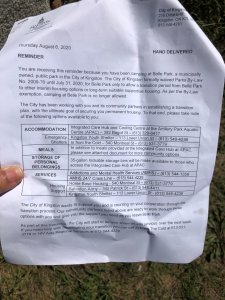 The CAO’s office said it would be working with campers over the next week to try to avoid forcing anyone out of the park.

“We will continue to work with partners and people at Belle Park on a one-on-one basis on interim and long-term housing options. Our efforts will continue to focus on options to avoid forced evictions.”

Despite protests from groups like Mutual Aid Katarokwi-Kingston, which have asked for services to remain while full-time rehousing options weren’t available, the city specified that temporary power, portable toilets and large garbage containers will be removed from the site within the next week.

The washrooms in the on-site clubhouse will remain open for all park users as normal during the summer months, the CAO’s office said.