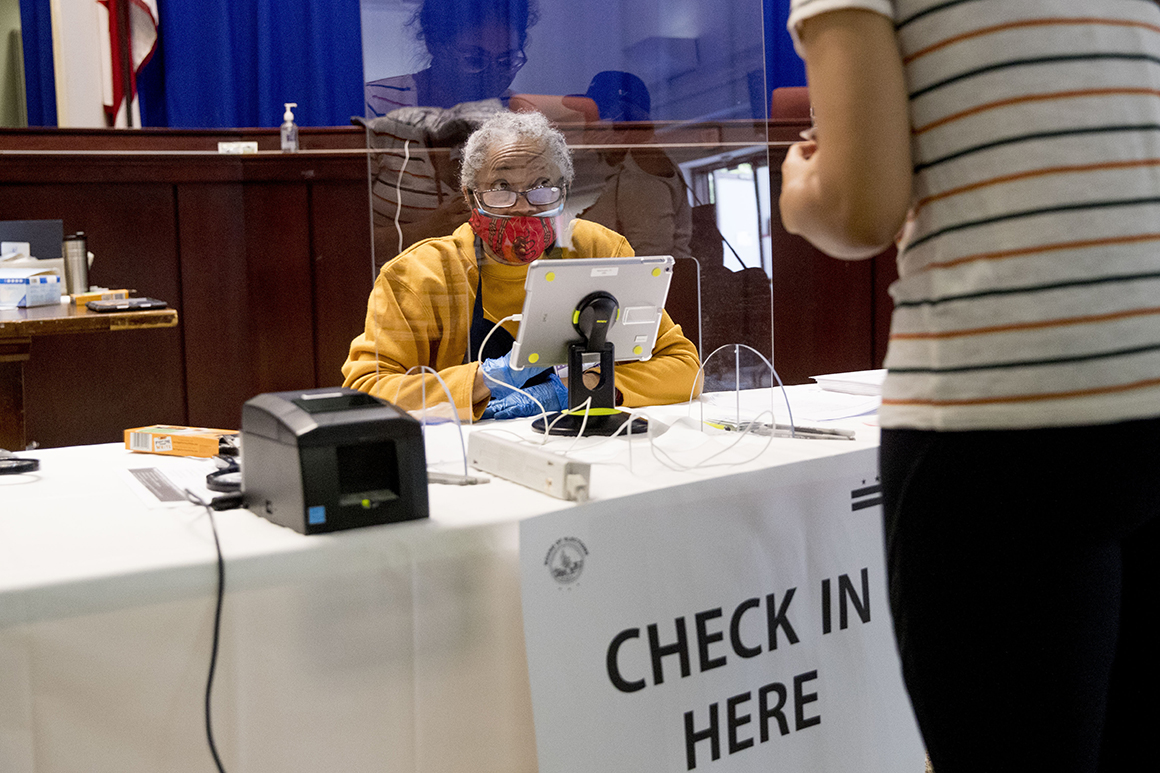 First it was toilet paper. Then it was cleaning supplies. Now, a new coronavirus-era shortage is threatening the November election: Poll workers.

Recruiting volunteers to check in voters, supply ballots and deal with issues has never been easy for election administrators. But in interviews and public statements, more than a dozen election administrators and voting advocates warned that slow poll worker recruitment could be a major vulnerability for the 2020 election.

Election officials across the country are seeing early shortages and scrambling to recruit a new generation of poll workers for Election Day, looking to maintain a volunteer force that has relied heavily on senior citizens in the past — the cohort most vulnerable to the coronavirus. Poll workers are responsible for everything from making sure voters get the right ballots to helping people with issues as they vote, and shortages could add confusion, long lines and delays to an Election Day process that has already been upended by the pandemic.

“We need 39,870 people for Election Day and early voting, and we don’t have anywhere near that. We have 13,021 vacant positions, [about] 32 percent statewide,” said David Garreis, the president of the Maryland Association of Election Officials. “The hardest thing that we have to do in any election is to recruit election judges. And in this year, it’s impossible.”

More than two-thirds of jurisdictions said that it was either “very difficult” or “somewhat difficult” to obtain a sufficient amount of poll workers — according to data collected about the 2018 elections by the Election Assistance Commission, a federal agency charged with assisting election officials — with just 15 percent saying it was either somewhat or very easy to do so. And that was before a pandemic that is especially lethal for those most likely to serve as poll workers hit America’s shores.

“It is a catastrophic problem,” said Garreis, who recently wrote a letter warning Maryland Gov. Larry Hogan about the situation. “It puts the success of the election at risk, to put too fine a point on it.”

The struggle to find new poll workers has already led to a consolidation of polling places during recent primaries in states across the country, contributing to long lines and voter confusion.

And election officials rely on waves of poll workers who have worked an election before, building institutional knowledge about how to deal with crises.

“Being an election official is like somebody shoving you into a batting cage, honest to God,” said Tina Barton, the clerk of Rochester Hills, Mich. “Fastballs are coming at you from every direction, and you’ve got to be like this election ninja, trying to avoid getting hit.”

Election officials are under a time crunch to try to figure out now how many poll workers they’ll have, so they can plan ahead and figure out how many polling places they can actually staff.

“The bulk of the management staff are your seasoned workers who have been around the block a few times and have done some elections, and kinda know what they’re dealing with,” said Russell Bridges, the elections supervisor for Chatham County, Ga. Bridges said that out of the usual 700 poll workers his office employs, about 50 of them have been reluctant to work due to the pandemic.

Wesley Wilcox, the supervisor of elections for Marion County, Fla., said that unlike some of his colleagues in the state and across the country, he’s “blessed” and seems to be in good shape ahead of the state’s mid-August primaries. But he’s counting down the days.

“Things that keep me up at night, obviously, is a higher than expected attrition rate going into Election Day,” said Wilcox. “I’m hoping I’m in good shape and I’m praying I am, but until we get here and we get to 6 a.m. or 6:30 a.m. that morning and I can really take attendance and see where it is, I’m hoping.”

Election officials across the country have turned to various populations to try to fill in the gaps. A popular choice is lawyers, with a handful of states pushing their state bar associations to give attorneys continuing education credits for serving as poll workers. They are also looking at high school and college students who can be lured with the promise of extra credit or some extra spending money for a day’s work.

Election officials are also engaging local businesses to give “civic time off” to employees to work as poll workers, along with pushing for local and state government employees to serve.

“Our mean age was 66, and through targeting [recruitment] we got that down to 61 now,” said Craig Latimer, the supervisor of elections in Hillsborough County, Fla., a big drop across the 2,000 poll workers he has.

Like his colleague in Marion County, Latimer said he was confident in the amount of poll workers he had for the August primary, and stressed the importance of protective measures election administrators can take to help protect both poll workers and voters alike.

“We’re going to have safe polling sites. It is a community project,” he said as he gave POLITICO a video tour of an early voting site, showing off hand sanitizing stations, plexiglass barriers for workers and spaced-out voting booths. He said it was crucial that workers also be provided with personal protection equipment.

Another challenge is that, even if the number of poll workers is adequate, a significant loss of veteran poll workers could still be crippling.

“If you replace one of those four [workers at a polling site] in an election, that’s okay, you can still be successful. The other three will normalize that other poll worker into how you appropriately deal with a polling location,” Jared Dearing, the executive director of the Kentucky Board of Elections, said at a July EAC hearing on lessons from the primaries. “But if you replace three of the four, I don’t know if that maxum still holds. … I worry about the expertise level and the experience … It could ultimately create more problems.”

And recruiting, training and protecting poll workers comes with a considerable cost, and some worry that some workers who stepped up to serve during the primaries may be unavailable in November.

Barton, the Michigan clerk, said she got additional funding from her city’s chief financial officer to continuously run an ad in the local newspaper to recruit more poll workers between now and mid-October, the first time she’s had to run such an extensive campaign. She also said she was worried that younger poll workers who are stepping in for the state’s August primary may be unavailable in November, depending on the status of local high schools and colleges.

“2020 could be the year that we recruit a whole new generation of poll workers and get a group of young, civically-minded people engaged in the process, and it’s a good education,” Ohio Secretary of State Frank LaRose said.

“A lot of people come up with all kinds of wild conspiracy theories about elections. And when you get a chance to actually look behind the curtain and work as a poll worker, what you realize is that it’s a very carefully thought out process,” he continued, “and a lot of those conspiracy theories melt away once you understand how elections really work.”