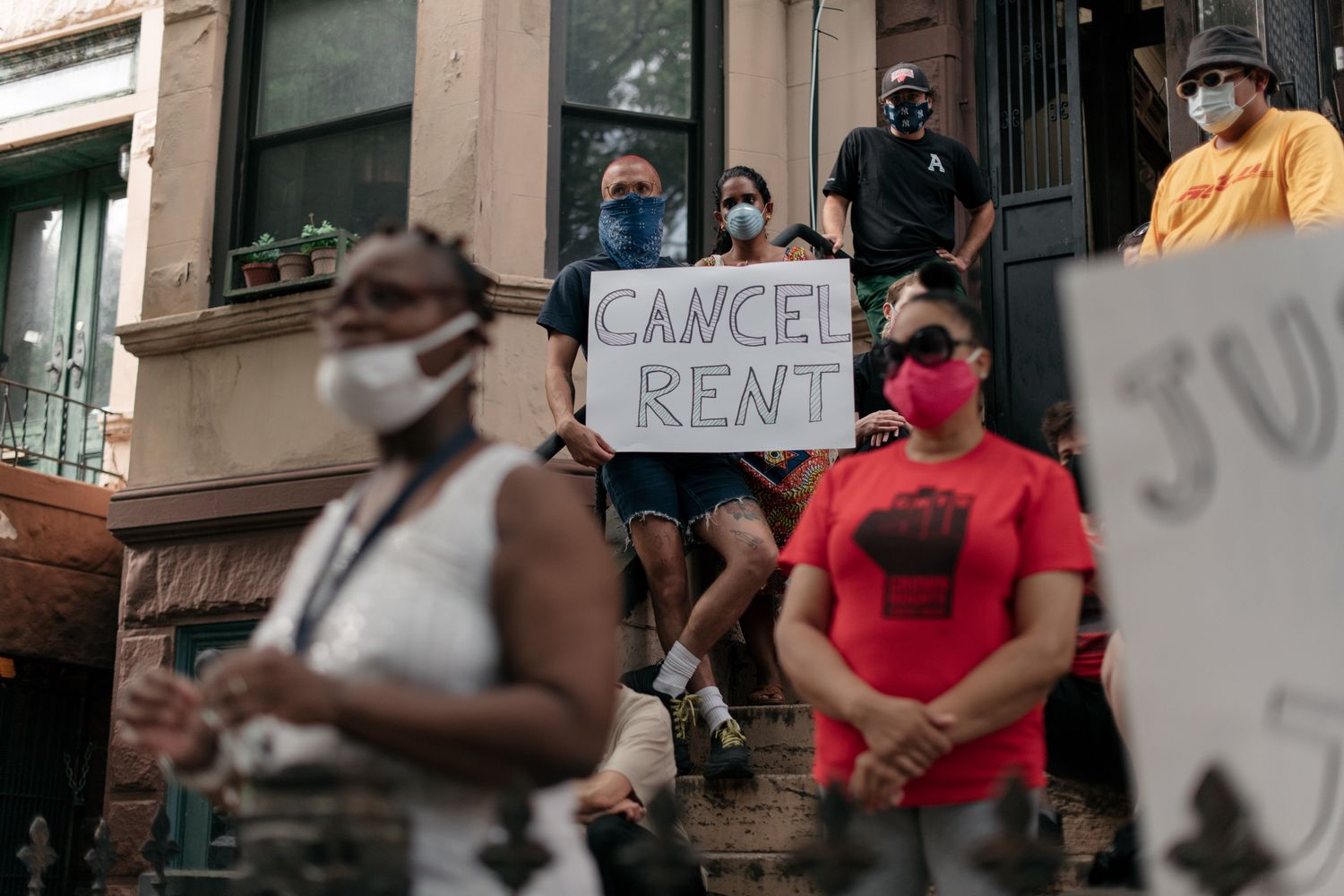 Federal housing aid during the coronavirus pandemic disproportionately benefits white households over minorities, with Black households most at risk, a POLITICO analysis has found. The federal assistance favors homeowners over renters, and because white households are more likely to own homes — a long-standing trend with roots in racist housing policy — they have more access to aid. Black households are more likely to rent than any other group, so they will be hardest hit with evictions likely to proceed in states without moratoriums, including Texas and Georgia.

Added to this are a number of complications, including the difficulty of carrying out eviction proceedings in-person in courtrooms and the public health implications of higher evictions in the southeast as the summer heat and hurricane season loom.

“If [a hurricane] gets piled on top of what we’re dealing with this year, it’s going to be bad,” said Cindy Kelley, executive director for the Chatham Savannah Authority for the Homeless, based in Savannah, Ga.

Federal assistance for homeowners with mortgages has covered a broader base than aid for renters. The CARES Act mortgage aid covers federally guaranteed mortgages and those backed by Fannie Mae and Freddie Mac, which include about 70 percent of outstanding single-family mortgages. A federal foreclosure moratorium is in place until Aug. 31, and homeowners can request up to almost one year of forbearance, meaning they can pause or reduce mortgage payments with no additional fees or penalties.

The CARES Act protection for renters included additional funding for existing HUD programs, including housing vouchers, and an eviction moratorium that lasted until July 24, 2020. The Act covered renters whose landlords have federally backed mortgages or who otherwise receive federal assistance. According to the Urban Institute, the measure doesn’t cover about 72 percent of the rental housing market.

“Our failure to address real systemic policy for renters is hurting Black and Brown people more than it’s hurting white people,” said Shamus Roller, executive director of the National Housing Law Project. “In this time when we’re bailing out lots of different parts of the economy,” he said, “somehow we expect that renters are going to be able to come up with the rent every month.” That “seems like an absurd outcome out of this.”

Data from the Census Bureau’s Household Pulse survey in July showed that 42.2 percent of Black renters had “no” or only “slight” confidence in their ability to pay the next month’s rent, compared to 21.7 percent of white (not Hispanic or Latino) and 32.5 percent of all renters.

States across the southeast have not extended eviction moratoriums

Some states and municipalities have set their own eviction moratoriums, but the response has varied across the country. Connecticut has extended a statewide eviction moratorium through Aug. 25, offering protection to renters in properties not covered by the federal measure, while Maryland has suspended evictions in cases where tenants can prove financial hardship due to Covid-19.

States including Alabama, Georgia, Louisiana and Mississippi have either allowed evictions to proceed as normal or left the decision to local jurisdictions, according to the Eviction Lab at Princeton University.

“There’s lots of different, sort of smaller things that cities and states can look at doing,” said Roller, who mentioned allowing tenants to break leases or negotiate repayment plans with landlords. “The key thing for me though, is that what we really need is rental assistance … and that the federal government is the only entity with pockets deep enough to fix this problem.”

Without additional action from Congress and the administration, families — especially minorities — in rental homes are at increased risk of eviction.

“We’ve got the majority of Black homes in the city who are going to be left out of any programs that are geared toward homeowners. And then the majority of white folks, who make up the minority of city residents, will be eligible for those programs,” said Cashauna Hill, executive director of the Louisiana Fair Housing Action Center, on the effect of federal aid for New Orleans residents.

In states such as Louisiana where evictions are allowed to go forward, in-person hearings pose the risk of spreading Covid-19 to court employees and those involved in eviction proceedings.

In New Orleans, Hill described one tenant suffering from kidney disease and hypertension whose request for a virtual hearing was at first denied before an appeals court later overturned the decision and allowed proceedings to take place by videoconference. As the pandemic has continued, New Orleans courts have made adjustments for safety, including allowing people to request virtual hearings.

“However, we do still have concern about overcrowded courts and lack of pervasive mask usage in courts where in-person hearings are held,” Hill said in an email.

Southeastern states that are at risk of seeing a large number of evictions are also in the middle of hurricane season.

The National Oceanic and Atmospheric Administration Climate Prediction Center on Aug. 6 projected an “extremely active” 2020 Atlantic hurricane season, which runs from June 1 through Nov. 30. It predicted 19 to 25 named storms (“average” seasons have about 12), and between three and six Category 3 or higher hurricanes. Hurricane Sandy, which hit New York and New Jersey in 2012, was a Category 3 hurricane.

Real estate intelligence company CoreLogic’s 2020 Storm Surge report projects that New Orleans and other cities like Miami, New York and Tampa have the most homes at risk of damage from storm surge, a wall of water that precedes a tropical storm or hurricane.

In a city facing down a hurricane, an evicted family could be left without refuge from severe weather. Storm season evictions could also compound challenges for community organizations that serve homeless people and others in need of shelter.

Kelley of the Chatham Savannah Authority for the Homeless said strategies that worked in earlier storm seasons would pose additional health risks in 2020 due to the pandemic. Her group has previously evacuated homeless people to inland cities that have agreed to shelter and feed them, but an evacuation during a pandemic would be difficult.

“If we had to do an evacuation, [it] would just be slower, because if we’re going to try to keep people with their masks on and separated, you can’t cram them all on a bus,” said Kelley. “That’s not going to work.”

Providing shelter that is relatively safe from the risks of Covid-19 is another challenge.

“Obviously, they’ll be protected from the storm … but at the same time you have to put them into locations where they are now protected from the transmission of this virus,” said Tom Jeffery, senior hazard scientist at CoreLogic Spatial Solutions. Jeffery said people could be sheltered in hotels or even in auditoriums or gyms, given appropriate precautions.

In cases where an evacuation from the city is not necessary, keeping renters in their homes would reduce the number of people who might have to rely on city shelters for safety. Rental assistance in these parts of the country would also serve as protection against summer heat and storms but would require significant federal aid and could necessitate an additional eviction moratorium.

The Urban Institute estimated that, without expanded state and federal unemployment assistance, providing aid to renters who were cost-burdened even before the pandemic and to those who lost income due to the crisis would cost $15.5 billion per month. The researchers also estimated that returning renters to their pre-pandemic rent-to-income ratio would cost $21.3 billion per month without expanded unemployment benefits.

Current data are “actually signaling that unless we do something very different from what we did in the past … racial inequality in homeownership is likely to just stay with us,” said Jung Hyun Choi, a research associate with the Housing Finance Policy Center at the Urban Institute.

The housing crisis in 2020 does not resemble the 2008 financial crisis in circumstances, but it could have a similar effect on Black wealth and homeownership. Following the financial crisis, Black homeownership has fallen, and wealth inequality has widened by race and income level, according to data from Pew Research Center.

Congress has not made clear whether additional relief for renters will be included in the next coronavirus aid package. Discussions over the aid package at present include extended unemployment benefits, and President Donald Trump said Thursday that he could issue an executive order extending the federal eviction moratorium as early as this weekend if Congress can’t agree on a plan.

“It’s only one thing for so many people that keeps them away from being homeless,” said Roller, “and that hurricane or that fire that pushes them out of their home may be that thing that tips them over the edge without the federal government having any comprehensive response to what’s going on right now.”