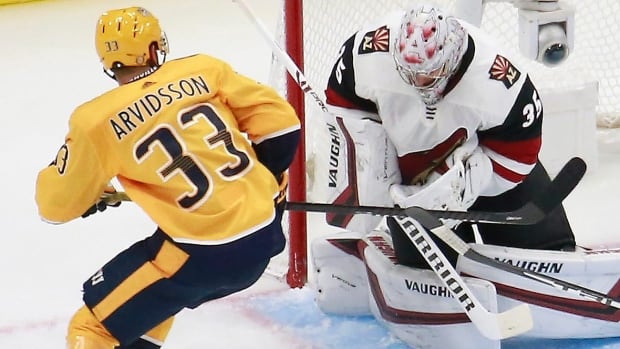 Oliver Ekman-Larsson scored the first of Arizona’s three first-period goals, a healthy Phil Kessel had two assists and the Coyotes held on to beat the Nashville Predators 4-3 Sunday to open their Stanley Cup qualifier series in Edmonton.

The Coyotes made the most of their first post-season appearance since 2012, scoring three goals in the opening period on their way to building a 4-1 lead.

The Predators rallied behind two goals by Filip Forsberg, the second midway through the third period, to cut Arizona’s lead to 4-3.

Darcy Kuemper, who stopped 40 shots, held off Nashville’s late push and the Coyotes snatched momentum heading into Game 2 of the best-of-five series on Tuesday.

Michael Grabner’s 22nd career shorthanded goal wound up being the game-winner for Arizona in a 4-3 win over Nashville. 1:00

Nashville was sixth in the Western Conference when the season was halted because of the coronavirus pandemic.

The Coyotes were beneficiaries of the new playoff format for the restart, earning a spot in the qualifier after ending the regular season 11th in the West.

The Coyotes had to deal with a distraction before arriving in Edmonton, learning general manager John Chayka had resigned the day the team left for the bubble.

Once the puck dropped in Edmonton, Arizona had the early jump and scored the opening goal, thanks to a double carom.

Ekman-Larsson scored it midway through the first period on a shot near the blue-line that hit Nashville centre Kyle Turris’ skate, bounced off teammate Matt Duchene’s body and floated over Saros’ head into the net.

Dvorak scored less than three minutes later, punching in a rebound of Kessel’s shot past Saros. Keller made it 3-0 on a power play, one-timing a pass from Dvorak over Saros’ glove shoulder.

In danger of being run out of the rink, the Predators breathed a little life into their hopes with a lucky bounce of their own. Forsberg got it, firing a power-play shot that Kuemper initially stopped before caroming off Arizona defenceman Niklas Hjalmarsson’s skate into the net with 2.5 seconds left in the opening period.

The Coyotes erased any Nashville momentum late in the second period when Grabner, Arizona’s short-handed specialist, broke free on a Predators power play and beat Saros to make it 4-1.

The Predators needed 30 seconds of the third period to gain it back, scoring when a shot by Ellis caromed off Ekman-Larsson’s skate past Kuemper. Forsberg cut Arizona’s lead to 4-3 on a power-play shot from the slot, but the Predators couldn’t get anything else past Kuemper.

Coyotes centre Nick Schmaltz did not play after taking a shot to the head in Thursday’s exhibition against Vegas.