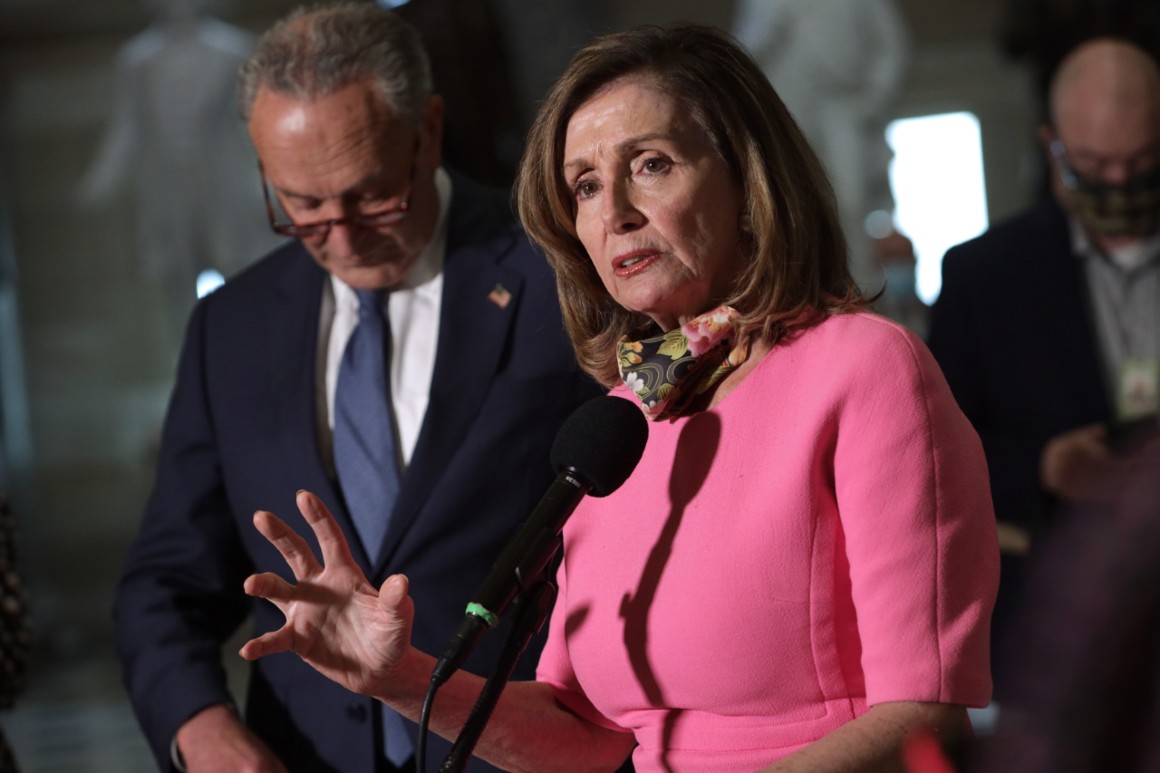 “Unfortunately, the president’s executive orders described in one word could be paltry,” Senate Minority Leader Chuck Schumer (D-N.Y.) said on ABC’s “This Week” with George Stephanopoulos. “In three words: unworkable, weak and far too narrow.”

Trump on Saturday laid out actions he said would cut taxes for workers through the end of the year, extend unemployment benefits at a reduced rate, renew a moratorium on evictions during the pandemic, and defer student loan payments and interest until the end of the year.

But top Democrats on Sunday slammed those actions, and White House economic adviser Larry Kudlow struggled to defend and explain some of the policies.

Pelosi called the actions “illusions,” arguing that the eviction moratorium only asks leaders in charge to study whether a moratorium on evictions is feasible and that the payroll tax cut would undermine Social Security and Medicare.

“When you look at those executive orders, either the kindest thing I could say is he doesn’t know what he’s talking about or something’s wrong there — something’s very, very wrong there,” Pelosi said. “So to characterize them as even accomplishing what they set out to do, as something that would take the place of an agreement, is just not so.”

Schumer said the actions were “put together in a crazy way” that would take weeks or months to go into effect in most places and insisted that the $400 unemployment benefit is unworkable because states don’t have the money to pay $100 of it. Plus, he added, it depletes the hurricane trust fund at the height of hurricane season.

“It makes no sense,” said Schumer, who urged Social Security and Medicare recipients to “watch out if President Trump is reelected.” Trump indicated that he might make the payroll tax cuts permanent if he wins reelection in November.

“It was the president’s first choice to go up and negotiate a fair deal,” he told Wallace. “They’ve refused any compromise on mostly every single other issue we’ve reached an agreement, and what happened on Friday was they said, ‘Well, call us back.’ We said to the president, ‘Look, now you gotta move forward with an executive action so you can help American workers and American people.’”

Mnuchin lamented that Democrats were willing to forgo a deal “until they get everything they want, which is just a bad outcome.”

“This will be the fifth bill. We don’t have to get everything done at once,” he argued. “What we should do is get things done for the American public now, come back for another bill afterward.”

Kudlow intimated that unemployed Americans could receive up to $1,200 in benefits in as soon as a couple weeks, though he cautioned that he didn’t want to be specific because he didn’t want to be held to it. And he conceded to CNN’s Dana Bash on “State of the Union” that the administration will “probably” find out later Sunday or Monday whether states are even willing to put up $100 for unemployed workers to get a full $400 benefit.

Kudlow, director of the National Economic Council, also said he spoke out of turn when he said last week that fixing and extending unemployment benefits would require an act of Congress because it couldn’t be done administratively. Constitutional scholars have argued the president doesn’t have the power to do so because it requires the allocation of money, a power the Constitution gives to Congress.

Ohio Gov. Mike DeWine, a Republican who recently tested positive then negative for the coronavirus, said he didn’t know whether his state would pay a quarter of Trump’s $400 weekly payments. He thanked the president for doing something but, as a former congressman and senator himself, put the onus on Congress to act.

“I’m confident that Congress can do something,” DeWine said on CNN. “They really need to do it. They need to pull together.”

Meanwhile, Democrats sought to highlight what priorities were left out of the president’s actions: an actual moratorium on evictions and money for schools to reopen safely, feed hungry families, aid state and local governments, and help administer safe elections this fall.

“They leave out a lot,” Schumer said, adding that his hope is “that Republicans who hung their hat on these executive orders will now be forced by the economy, by the health care crisis … to come to the table, accept our compromise to meet in the middle and come up with an agreement.”

CORONAVIRUS: WHAT YOU NEED TO KNOW

“Right now, we need to come to agreement,” Pelosi said. “We’ve got to meet halfway. We’ve got to do the best we can for the American people. But what they’re putting forth does not meet that standard. It could.”

The Democratic leaders refused to say whether they would challenge Trump’s orders in court. Mnuchin, however, all but dared them to do so.

“We’ve cleared with the Office of Legal Counsel all these actions before they went to the president,” he said. “I would say if the Democrats want to challenge us in court and hold up unemployment benefits to those hardworking Americans that are out of a job because of Covid, they’re gonna have a lot of explaining to do.”

Asked on “State of the Union” whether talks could stall until a September deadline to fund the government, Pelosi insisted the two are separate issues and that Democrats and the Trump administration will return to the negotiating table and find a solution before they turn to government spending for the next fiscal year.