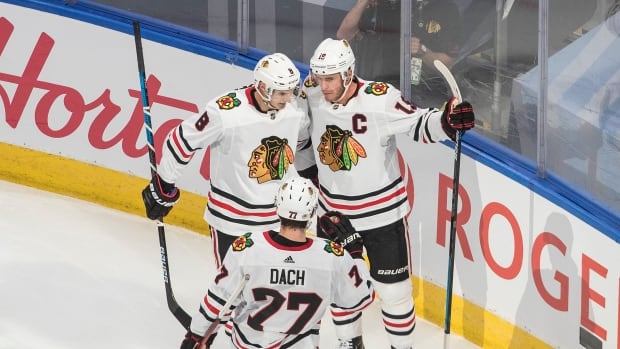 Rookie winger Dominik Kubalik scored two goals and added three assists, leading Chicago to a 6-4 win over the host Edmonton Oilers in the opener of their best-of-five qualifying round series on Saturday.

Connor McDavid had a goal and three assists for Edmonton.

It was a continuation of the torrid scoring pace set by Kubalik, a 24-year-old Czech forward and a Calder Trophy finalist. He racked up 30 goals and 16 assists before regular-season play was halted in mid-March due to the COVID-19 pandemic.

Dominik Kubalik broke a Chicago record for most points by a rookie in a playoff game with 5 in a 6-4 win over the Edmonton Oilers. 1:06

In Wednesday’s exhibition game against St. Louis, he had two goals and an assist.

Chicago took control early in the afternoon contest, the first in Edmonton as part of the NHL’s restart.