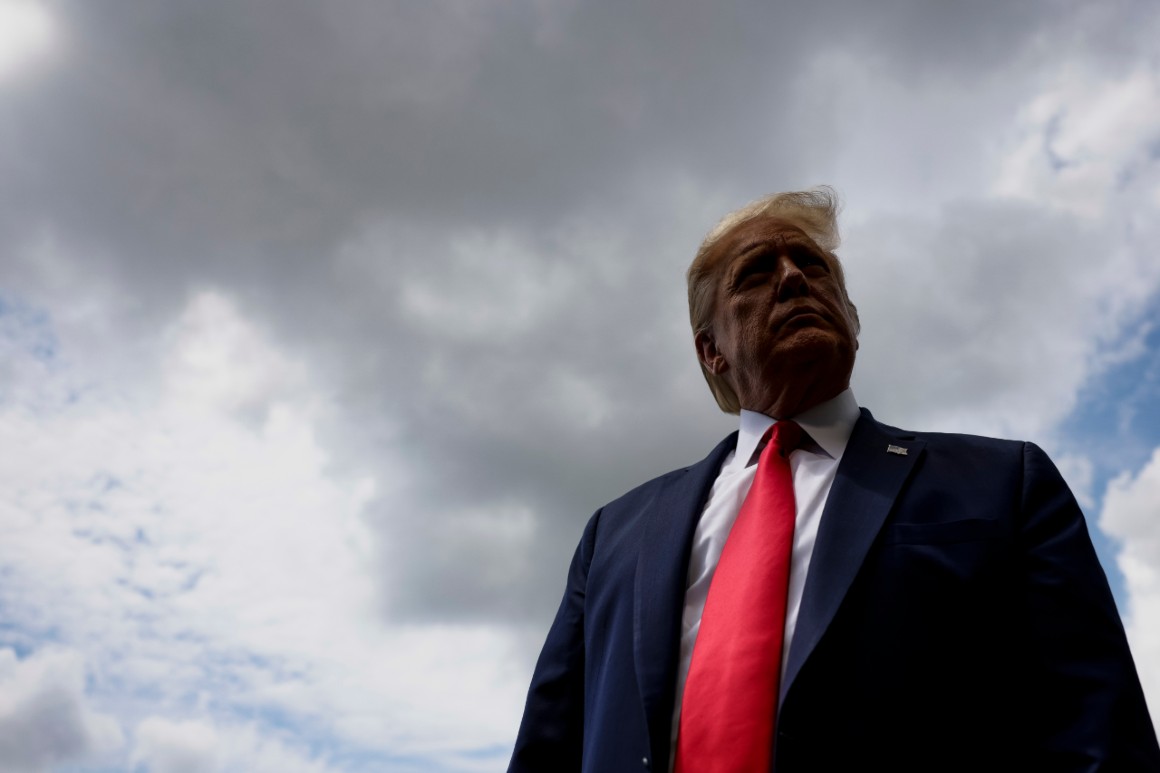 His law-and-order rhetoric isn’t registering with suburban voters. One of his leading evangelical supporters, Jerry Falwell Jr., was just photographed with his zipper down. Immigration isn’t provoking the response it did in 2016, and NASCAR has spurned the president.

Even an attempt by a New York Democrat to take down the NRA — a lawsuit announced Thursday by state Attorney General Letitia James — looks unlikely to juice Trump’s reelection hopes.

“America has changed,” said Frank Luntz, the veteran Republican consultant and pollster. “Every person who cares about the NRA is already voting for Trump. Suburban swing voters care about the right to own a gun, but they don’t care about the NRA.”

A brawl between the NRA and New York state once would’ve been turnout gold for a Republican president. And some Republicans and Democrats alike on Thursday suggested that Republicans could use the episode to stoke turnout among Trump’s base.

But the NRA is not the institution it was in American politics even four years ago, when it spent heavily to help Trump win election. Beset by financial problems and infighting, public support for the NRA has declined during the Trump era, falling below 50 percent last year for the first time since the 1990s, according to Gallup. At the same time, nearly two-thirds of Americans want stricter gun laws.

That’s when voters are even thinking about gun control. Three months before Election Day, they mostly aren’t — it’s all about coronavirus and the economy, stupid. That’s a problem for Republicans even the NRA has acknowledged.

Frank Miniter, editor in chief of the NRA publication America’s First Freedom, raised the alarm for members in a column last week. Citing research by a firearms trade association, he lamented that “only 17% of gun owners in the survey said ‘gun-related issues’ were one of their three top policy areas going into this election (15% did say ‘crime’ and 18% said ‘civil rights’).”

The culture wars of old, said Paul Maslin, a top Democratic pollster who worked on the presidential campaigns of Jimmy Carter and Howard Dean, seem “miles away from where this election is right now.”

Gun control and other cultural issues, he said, “are always a backdrop and a way for Trump to maintain his base. But again, his base is 42 percent. Where’s the other 5-6 percent he needs going to come from?”

If Republicans have an opening in the developing feud over the NRA, it will likely have less to do with gun control than with a broader effort to paint Joe Biden as beholden to the progressive left. The former vice president, a moderate Democrat, remains ill-defined in many voters’ minds, pollsters of both parties say. Republicans are spending heavily to depict him as an extremist, and the filing of the NRA lawsuit in New York, a heavily Democratic state, helped Republicans to advance their cause.

“The Democrat strategy has seemed to be — and I think it was a smart strategy — go with Biden, he’s a centrist, he’s safe, he’s non-threatening,” said Greg McNeilly, a Republican strategist in Michigan and longtime adviser to Secretary of Education Betsy DeVos. While that alternative seemed inviting to a lot of Trump supporters, including older voters, McNeilly said he thinks they’ll reconsider when the reality of a potential Biden presidency sets in.

And the lawsuit against the NRA is “incredibly tangible, specific attack on a core Republican value … This is a gift to the Trump campaign, and it’s an unforced error on the [Democratic] side. It’s a real mistake.”

Trump himself pressed the case Thursday when he called the New York action a “very terrible thing that just happened.”

Evoking his own defection from New York to Florida and drawing a more explicit connection to a state that is unexpectedly competitive, he told reporters, “I think the NRA should move to Texas and lead a very good and beautiful life, and I’ve told them that for a long time.”

Pro-gun control groups like Everytown for Gun Safety have spent millions of dollars on down-ballot races in recent years, winning victories in a number of swing congressional districts in 2018. And Democrats sense an opportunity to put the NRA down for good.

“What’s interesting is that if the NRA truly has to dissolve, there is no far-right organization that is going to take its place,” said Mathew Littman, a former Biden speechwriter who works on gun reform. “The NRA is not where the American people are on the gun issue … So without that, I think you could see rational gun reforms.”

Within hours of the lawsuit’s announcement, some Democrats did raise concerns about the effect that it could have on turnout. One Democratic elected official in Pennsylvania likened it politically to a Republican attorney general suing to dissolve Planned Parenthood, saying, “If this is the election of our lifetime, and I believe it is, why risk it?”

But given Trump’s inability to harness any other cultural issue so far in the campaign, it will likely take a Hail Mary for him to make it work. Trump has been running consistently behind Biden nationally and in most battleground states — unaided by issues surrounding civil unrest and the flag. Trump’s best chance, most Republicans and Democrats agree, is for the coronavirus or economy to turn around or for his law-and-order rhetoric to gain traction.

“The election is about Trump’s pandemic response and the answer to the Reagan question: Are you better off now than four years ago,” said Doug Herman, a lead mail strategist for Barack Obama’s 2008 and 2012 campaigns.

Even in Texas, a relatively gun-loving state, several Democrats said they doubted the NRA issue would resonate.

“I just don’t really think that many people are paying that much attention” to anything other than the pandemic and the economy, said Colin Strother, a veteran Democratic strategist in Texas.

Holly Otterbein contributed to this report