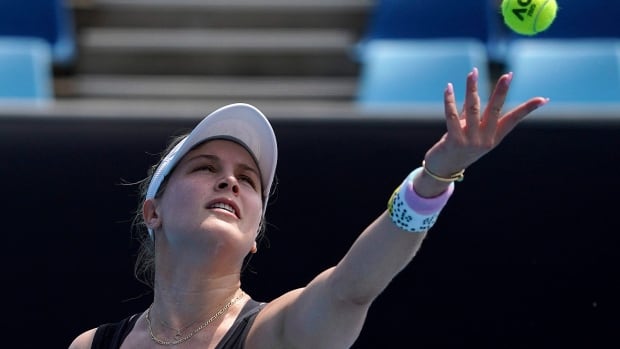 Eugenie Bouchard rolled to a 6-0, 6-3 upset over No. 8 seed Veronika Kudermetova on Monday at the Prague Open as the Canadian won her first official match since January.

Given a wild-card into the WTA Tour event, Bouchard, ranked 330th, notched a convincing victory against the world No. 40.

“I’m so grateful to have a job and just have this opportunity and kind of appreciate things more when they’re taken away from you,” Bouchard said from the Czech Republic.

Bouchard, from Westmount, Que., saved all five break points she faced and won 72.7 per cent of her points on first serve.

Kudermetova won just 44.4 per cent of her points on first serve.

“I didn’t know what to expect in terms of my level. I played better than I expected. I wanted to just be there mentally no matter what and I’m proud of how focused I stayed during this match,” Bouchard said.

A former world No. 5 and the Wimbledon finalist in 2014, Bouchard, 26, has tumbled down the rankings in recent years. She’s projected to move up to around No. 300 following the win Monday.

Bouchard will play the winner of a match between Tamara Zidansek of Slovenia and Katerina Siniakova of the Czech Republic in the second round.

The Prague Open is one of two tournaments in the second week of the WTA Tour’s restart during the COVID-19 pandemic. Play was suspended in March.

Bouchard missed all of February with a wrist injury. She was about to board a plane from her training home in Las Vegas to attend a tournament in Mexico just as the pandemic hit in March, leading to the cancellation of the event.

Bouchard did play three exhibition events during the break, saying they “definitely helped” her on Monday.

“I tried to see it as this is an extra four months of training,” she said. “It was hard to do that day in and day out without a schedule and without even knowing when you’re coming back. You’re kind of like what am I even doing this for? But with my trainer and coaches, we tried to stay focused and motivated to just use it to our advantage. I’m proud of myself because I feel I did that.”