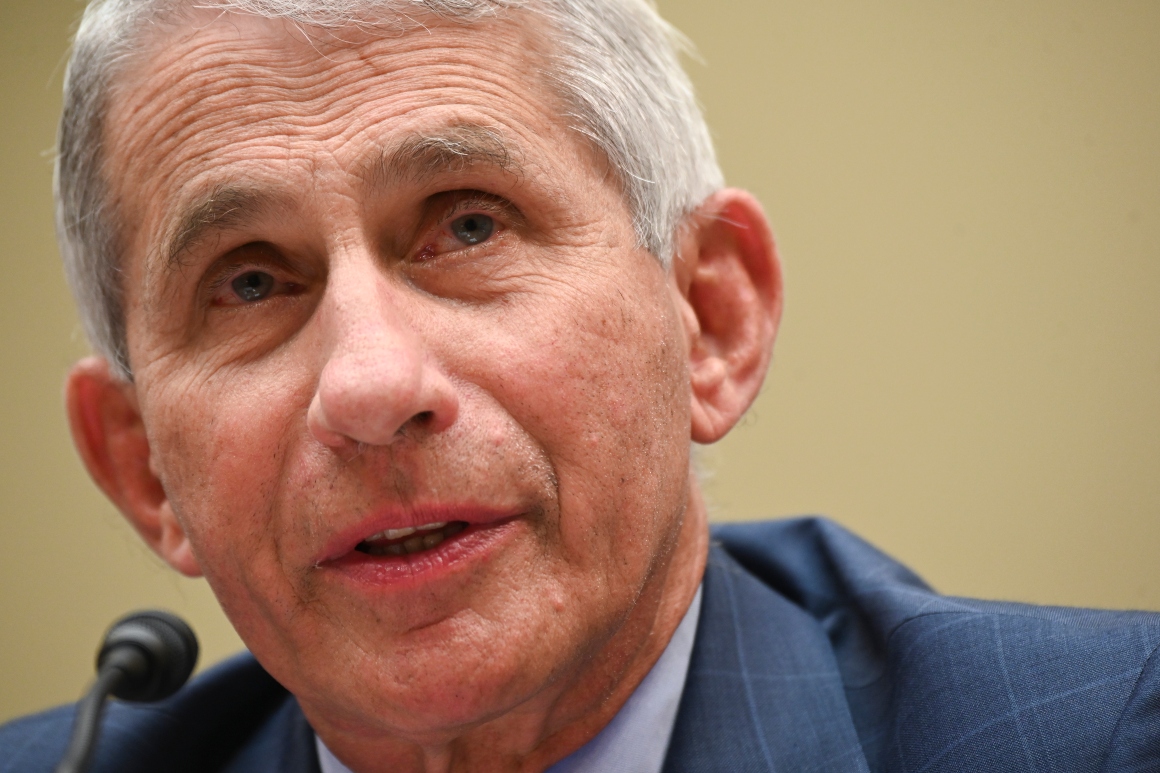 Anthony Fauci, director of the National Institute of Allergy and Infectious Diseases, testifies during a House Select Subcommittee on the Coronavirus Crisis hearing. | Erin Scott-Pool/Getty Images

Anthony Fauci, the nation’s top infectious-disease expert, says the United States is facing a “concerted challenge” to navigate the resurgent Covid-19 outbreak — but if Americans band together, the nation can avert another extended shutdown.

“There seems to be a misperception that either you shut down completely and damage a lot of things, mental health, the economy, all kinds of things, or let it rip and do whatever you want,” Fauci told POLITICO’s “Pulse Check” podcast on Wednesday. “There’s a stepwise fashion that you can open up the economy successfully.“

“You don’t have to lock down again, but everybody has got to be on board for doing these five or six fundamental public health measures” like masks and social distancing, Fauci added.

In a wide-ranging conversation, Fauci addressed the breakdowns, the recent surge in cases and his own role in trying to steer the nation through a historic outbreak that’s already killed more than 160,000 Americans and appears to be surging again.

Even as cases have risen in recent weeks, “I think we can get through this without having to revert back to a shutdown” if Americans uniformly wear masks, physically distance, avoid crowds and follow hand-hygiene recommendations, Fauci said. “When you have a weak link, then the whole system is unsuccessful.”

Fauci also said that while Covid-19 is presenting a historic threat, he’s worried about the next pandemic, too. “I tend not to be pessimistic, but I tend to be realistic about the foibles of our society and of our human nature,” Fauci added. “So I think we’re going to have outbreaks after this outbreak.”

Fauci also acknowledged criticism from President Donald Trump, who has repeatedly said that the doctor had been overly optimistic about containing the virus. According to Fauci, while he did advise this winter that Covid-19 was potentially containable, he stressed that his critics have omitted key context: that Fauci said the situation could change.

“Those who try to discredit me left out, comma. ‘However, this could change and it could change rapidly,’” Fauci said.

But Fauci skirted further questions about the political infighting within the administration, including the repeated attacks on his record by White House trade adviser Peter Navarro.

“Talking about that … is a distraction,” Fauci said. “I don’t want to waste any time arguing with things that are not scientific. So I want to focus like a laser beam on what I need to do.”

Fauci also dismissed a recent Vanity Fair report that suggested the Trump administration may have abandoned a national coronavirus testing plan this spring because the hardest-hit states were led by Democrats.

“I have never heard anything even resembling that. I’ve never heard that,” Fauci said. “And I’ve been at every single task force meeting, I haven’t missed a single one.” The White House has separately denied the report.

Meanwhile, Fauci acknowledged that days of delays in returning coronavirus test results are hampering the ability to trace who’s infected. Health experts have said that the recent delays — sometimes lasting a week or more — have rendered the tests largely useless.

Health experts have called on the administration to roll out a slew of simple and rapid tests — even though the tests would likely be less accurate — and Fauci said those would “absolutely” be coming.

“We’re talking about hopefully getting many, many millions of more tests that can be done rapidly within the next month or so,” Fauci said, although added that he couldn’t “guarantee that” given that the testing work falls outside his purview.

Fauci also touted the Trump administration’s “Operation Warp Speed” vaccine initiative, saying he remains confident that the mammoth effort will pay off with billions of doses in vaccines in the coming months. The 79-year-old disease expert acknowledged that he is eager to get vaccinated too, but doesn’t want to jump the line.

“When the vaccine becomes available after a 30,000-person or more placebo-controlled randomized trial — and it’s shown to be safe and effective— I would get it any time within the timeframe of the people who prioritize it according to ethical principles,” Fauci said. “In other words, there may be people who need it more than I do, and I would prefer they get it if they need it.”

The latest news in health care politics and policy.

Meanwhile, Fauci mostly dismissed the growing conspiracies and misinformation about his role, saying he’s worked to ignore them. While those claims have predominantly circulated online, they’ve increasingly jumped into the conservative mainstream; Sinclair Broadcasting last week shelved plans to air a segment featuring discredited allegations that Fauci played a role in starting the pandemic.

“There’s one thing about that nonsense that I do object to, and that is the effect that it has on my family,” the doctor added. “Because when you get death threats that require you having security protection all the time, and when they start hassling your children on the phone and at their job and interfering with their lives, that pisses me off. I must say.”

Fauci also offered advice on an increasingly common social scenario: how Americans concerned about the coronavirus should act when encountering people flouting guidance on wearing masks.

“You appeal to the better angels in people to try and explain to them why it’s important to do that,” Fauci said. “You don’t say, ‘you stupid idiot, why don’t you have a mask on?’ Because that’s only going to push them away.”