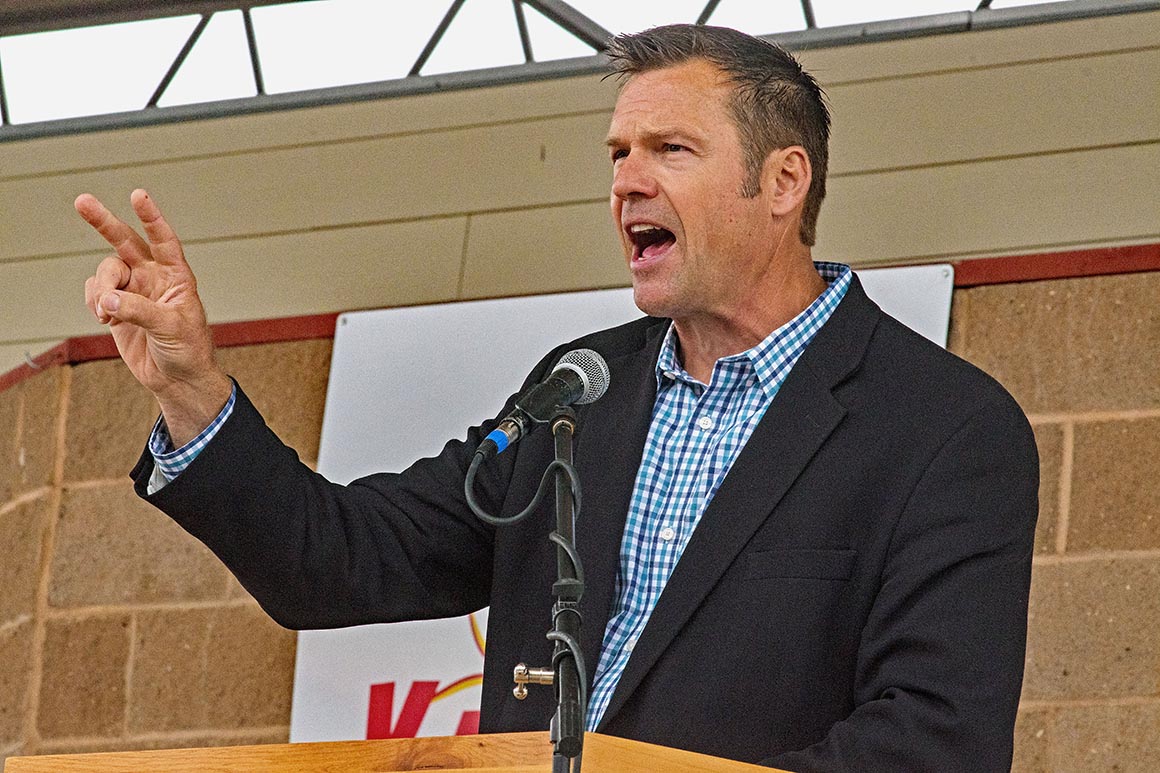 On Thursday, the top operative for Senate Republicans’ campaign arm appeared on a private Zoom call organized by GOP operatives to discuss the party’s efforts to stave off a Democratic takeover.

During the presentation, National Republican Senatorial Committee executive director Kevin McLaughlin warned that if hardline conservative Kris Kobach wins next Tuesday’s Kansas Senate primary, it could doom the GOP Senate majority — and perhaps even hurt President Donald Trump in a state that hasn’t voted Democratic since 1964.

“The Senate majority runs through Kansas,” McLaughlin warned, according to people familiar with the call.

The new warning came after a flurry of Democratic meddling has scrambled the closing weeks of a primary race that had otherwise gotten back on track. Senate Republicans have opposed Kobach for a year, fretting that he can’t win a Senate contest after losing the 2018 gubernatorial race, and have warned about him consistently in public and in private.

After failing to woo Secretary of State Mike Pompeo into the race, Republicans had mostly rallied behind Rep. Roger Marshall, who was leading Kobach comfortably in internal polling earlier in the summer. But after nearly $5 million was dumped in by a super PAC with ties to Democrats to elevate Kobach and bash Marshall’s image, Republicans acknowledge that the primary is a dead heat.

A Kobach victory would upend the battle for control of the Senate. Democrats haven’t won a Senate race in Kansas since the 1930s, but with Kobach on the ballot, Republicans would be forced to sink millions into trying to defend a seat party officials believe should have stayed safely in their column.

Republicans are already stretched thin on a Senate map that features more than a half-dozen GOP incumbents in competitive races. GOP leaders concede the fight to keep the Senate has gotten harder in recent months but believe the party still can maintain control if it isn’t dumping money into places like Kansas.

Democrat Barbara Bollier, a state senator and former Republican, faces only nominal opposition in her primary and has outraised all of her potential GOP foes.

Trump has remained on the sidelines in the race, frustrating some Republicans who believe a late endorsement could deliver a victory to Marshall, whom they view as much more electable.

Republican officials, including Sen. Todd Young (R-Ind.), the NRSC chairman, have spoken with the president as recently as last week about making an endorsement in the race, believing that he could single-handedly alter the current trajectory, according to multiple people familiar with the conversations. Internal Republican polling has shown a Trump endorsement would shift potential Kobach supporters towards the president’s pick, according to a Republican familiar with the data.

The president discussed the race with his political advisers on Air Force One last week returning from an event in Texas. Trump indicated he was unlikely to intervene, according to people familiar with the discussion.

During the in-flight conversation, Sen. Ted Cruz (R-Texas) pointed out Marshall’s previous support for John Kasich in the 2016 presidential primary, according to two sources briefed on the discussion. CNN first reported on the conversation. A person familiar with the White House’s thinking disputed the idea that Cruz’s comment swayed the president but acknowledged that it made it harder for Marshall to earn the endorsement.

All of the candidates have relied on Trump’s name and his supporters, even without his backing. An ad from Senate Leadership Fund, the GOP super PAC aligned with Majority Leader Mitch McConnell, featured a photo of Trump and Marshall, with a narrator saying Trump has called Marshall a “great friend.” A recent Kobach ad featured heavy use of footage from an October 2018 rally Trump held boosting Kobach’s gubernatorial campaign, with a small insignia in the corner making the date clear.

Two years ago, Trump endorsed Kobach the day before the 2018 gubernatorial primary, and Kobach defeated then-Gov. Jeff Colyer by 343 votes. Kobach then lost to now-Gov. Laura Kelly, a Democrat, by five percentage points. Trump has expressed frustration with expending political capital for Kobach only to see him lose, according to Republicans familiar with the discussions.

Recent polling has shown this year’s primary coming down to the wire. One recent GOP survey showed Marshall with 33 percent support compared to 30 percent for Kobach, with busienssman Bob Hamilton and former NFL player Dave Lindstrom trailing, according to multiple officials who described the poll.

Additionally, an internal survey conducted for the NRSC last week showed that in a general election matchup, only 54 percent of Republican primary voters would back Kobach, while 29 percent would instead to vote for Democrat Barbara Bollier, according to three people familiar with the data, which has been presented to the White House. That much potential crossover support for Bollier, who has the backing of major Kansas and national Democrats, could doom Republicans’ chances in the race.

In addition to private entreaties, Republicans opposed to Kobach have sounded the alarm consistently and publicly. The NRSC blasted Kobach on the day he announced last year. Sen. Pat Roberts, who is retiring from the seat, endorsed Marshall last month despite previously pledging to stay neutral, and Senate Leadership Fund is spending nearly $2 million on positive ads boosting Marshall, according to recent FEC filings. Additionally, a GOP-linked super PAC that won’t have to disclose its funding until after the primary, has spent more than $3 million to run TV ads attacking Kobach.

The president has intervened privately in the race. He called David McIntosh, the head of the conservative Club for Growth, to ask the group to stop running ads attacking Marshall, according to people familiar with the conversation, which was first reported by The New York Times.

Many Kansas Republicans hoped Trump would endorse and boost Marshall to ease their concerns about the fall. One veteran Republican operative in the state, who requested anonymity to speak frankly, said Trump likely knows “if he doesn’t have Kansas, the Senate majority is fried.

“Republicans were hopeful the president would be doing something by now already — and are agitating that if he’s going to do it, he better do it quickly,” the GOP operative said.

Kelly Arnold, a former state GOP chairman, told POLITICO Trump’s endorsement put Kobach over the top in 2018. But while many Republicans would like to see him endorse Marshall, Arnold said Republicans on the ground are unsure where he stands.

“All of our candidates are making a bid to get his support [and to] try to show to the voters that they are the president’s closest supporter. It is important,” Arnold said. “They’re definitely making that play to try to earn the president’s endorsement and the president’s supporters here in Kansas.”

While Trump hasn’t weighed in, other Republicans are trying to help Marshall close things out. Newt Gingrich, the former House speaker, made an appearance on a local radio station last week and hammered Kobach as a threat to the GOP majority. After the radio appearance, Gingrich agreed to sign a fundraising email for Marshall and to record a robocall for him.

In the call, going out to Kansas voters, Gingrich calls Marshall a “committed pro-life conservative, a great supporter of President Trump.” While he doesn’t mention Kobach, he does say, “Too much is at stake to take a chance on anyone else.”

“Every poll I’ve seen says that Kobach can’t win a general election,” Gingrich said on the radio. “[Kobach] did the worst statewide numbers when he ran for governor of any Republican in the last more than a decade. He’s weaker now. Kobach is the Schumer candidate, and people just need to understand that.”

Alex Isenstadt contributed to this report.