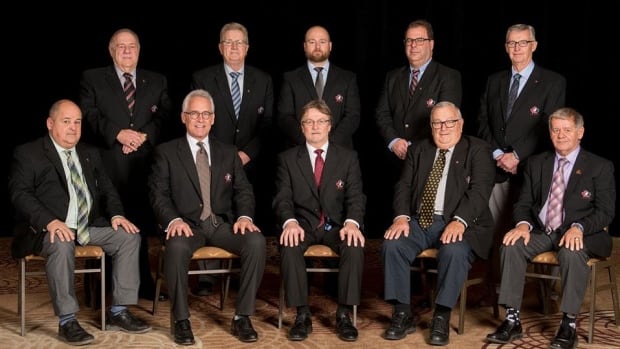 In a move it says is aimed to include more diverse perspectives, Hockey Canada has mandated a minimum of two women must sit on any of its future board of governors.

Currently, the 10-member board is composed of white men. Candidates are being sought for board elections in November that will fill nine positions, including the chair, for two-year terms. The deadline for this year’s nominations is Sept. 15.

“With respect to the board of directors, as a first step in our efforts to be more diverse, Hockey Canada and its members approved a by-law change at the 2019 annual meeting which requires the board to have representation from both genders (a minimum of two males and two females) by fall of 2020,” Hockey Canada said in an email to CBC Sports.

“Further to that, our nominating committee has been specifically tasked with recruiting a more diverse group of board nominees, including visible minorities.”

Karen Phibbs, who was a member from 2013-15, is the only female to sit on Hockey Canada’s board.

Having more diverse voices at the table in all leagues and sport organizations has come into sharp focus recently.

A recent CBC Sports investigation of nearly 500 leadership positions in Canadian sports found a distinct lack of diversity in major national sports organizations — including Hockey Canada — as well as U Sports, the country’s governing body of university athletics.

Canadian universities and national sports groups say they have to do more to diversify their coaching staff and leadership, after CBC Sports carried out a visual audit and found the vast majority of those positions are held by people who are white. 2:10

CBC Sports found similar results across seven major leagues in North America: NFL, MLB, NHL, NBA, CFL, WNBA and the NWSL. In the NHL, 119 out of 121 positions examined through a visual audit were held by white people, and only two were female.

“Hockey Canada has been working at various stages over the past few years to address areas of diversity and inclusion. Acknowledging that need led to further discussions,” it said in an email. “As a result of that necessary work was the establishment of our Equity, Diversity and Inclusion Task Team to ensure a safe environment for all participants.”