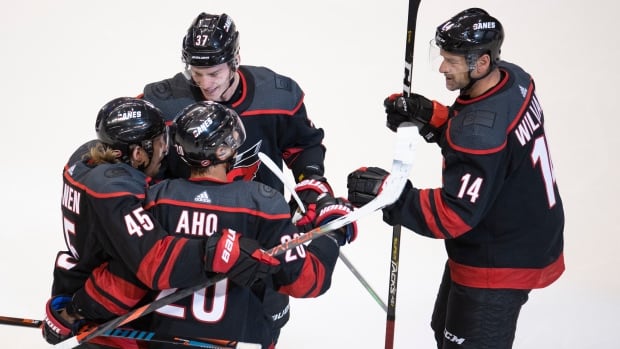 The NHL’s most unusual season in history resumed Saturday with five qualifying-round games as the league kickstarted its pandemic-hit campaign.

The New York Rangers and Carolina Hurricanes got things going 142 days after COVID-19 forced a suspension of the schedule on March 12 with a noon ET opening faceoff at Scotiabank Arena.

Any concern about a lack of emotion for the 24-team resumption of play without fans in attendance was put to rest early when Carolina’s Brady Skjei rocked Jesper Fast with a massive open-ice hit.

Jaccob Slavin scored the NHL’s first-ever August goal moments later on the opening shot just 61 seconds in when he roofed a puck on Rangers goalie Henrik Lundqvist. The 38-year-old Lundqvist was a surprise starter when rookie sensation Igor Shesterkin was deemed unfit to play — the league’s new all-encompassing term if a player is sick or injured to avoid revealing the identity of someone who’s tested positive for the novel coronavirus.

Martin Necas scored the game-winner for the Carolina Hurricanes in a 3-2 game to kick off the 2020 NHL Playoffs. 0:55

Hurricanes winger Justin Williams, whose team picked up a 3-2 victory to grab a 1-0 lead in the best-of-five series, and New York centre Ryan Strome then dropped the gloves in a spirited fight as both benches banged their sticks on the boards inside the frigid, cavernous venue on a day when the mercury hit 28 C outside.

Two more games were set for Toronto later Saturday as part of the qualifying round — the Florida Panthers vs. the New York Islanders and the Montreal Canadiens vs. the Pittsburgh Penguins — while in Edmonton, the Oilers were set to take on the Chicago Blackhawks and the Winnipeg Jets were scheduled to battle the Calgary Flames.

The eight teams that advance from the qualifying round will join the top-4 seeds in each conference as part of the usual 16-slot playoff bracket.

While television viewers had crowd noise pumped into the broadcast, hearing both benches celebrate big moments or complain about a perceived injustice over a dull drone of canned fan reaction coming through the arena’s speakers made it sound more like a intense beer league game than an NHL post-season matchup.

The Rangers were on fire when the NHL went on pause, Rob Pizzo examines whether or not they can rekindle that flame. 1:09

Eight massive screens were suspended from the rafters as part of the made-for-TV spectacle, while the first dozen rows of the lower bowl were tarped off. Cleaning crews wiped down the benches between periods as part of the league’s long list of health and safety precautions.

Although the pandemic is the reason the NHL is playing in the middle of summer in the hub cities of Toronto and Edmonton inside tightly controlled secure zones — or “bubbles” — separate from the general public in hopes of keeping the virus out, the world is a different place in another way since a North American hockey game actually mattered.

Mass demonstrations demanding social justice, racial equality and an end to police brutality exploded across the United States and around the world after George Floyd, a Black man, had his life taken by a Minneapolis officer in late May.

A number of high-profile NHLers spoke up in the aftermath — something outside the norm in the usually-buttoned-down sport — with some even taking part in marches.

The league hung banners at each end of the arena as part of its .WeSkateFor campaign with “Black Lives” as the tag line, and displayed the same message on the video board ringing the upperdeck and the entrance to each section in the fan-less, cavernous building. The league is also giving front-line workers a nod with the hashtag.

With the Hurricanes designated as the home team, players hit the ice to the song “Rock You Like A Hurricane” by Scorpions. The national anthems were performed on video by North Carolina resident Adam Lee Decker, a former “American Idol” finalist. The rink-board advertisements were what would normally be seen at games in Raleigh, N.C.

Ian Hanomansing talks with the commissioner of the NHL about the return to play, racial equality and if there will be an asterisk beside this season’s Stanley Cup winner. 9:57

“The Star Spangled Banner” was first, followed by “O Canada” despite the fact no Canadian teams were involved in the first game.

Unlike the NBA’s resumption of play near Orlando, Fla. — which has seen many players and coaches kneel for the opening games of basketball’s restart in support of social justice — no members of the Rangers or Hurricanes appeared to protest.

The “Black Lives Matter” slogan has been painted on the NBA’s courts, but nothing was added to the ice for Saturday’s openers north of the 49th parallel. Some players also kneeled for Major League Baseball games to start the season last month.

Instead of showing the game inside the rink, the screen ran a series of advertisements in hopes of keeping crowds from gathering.