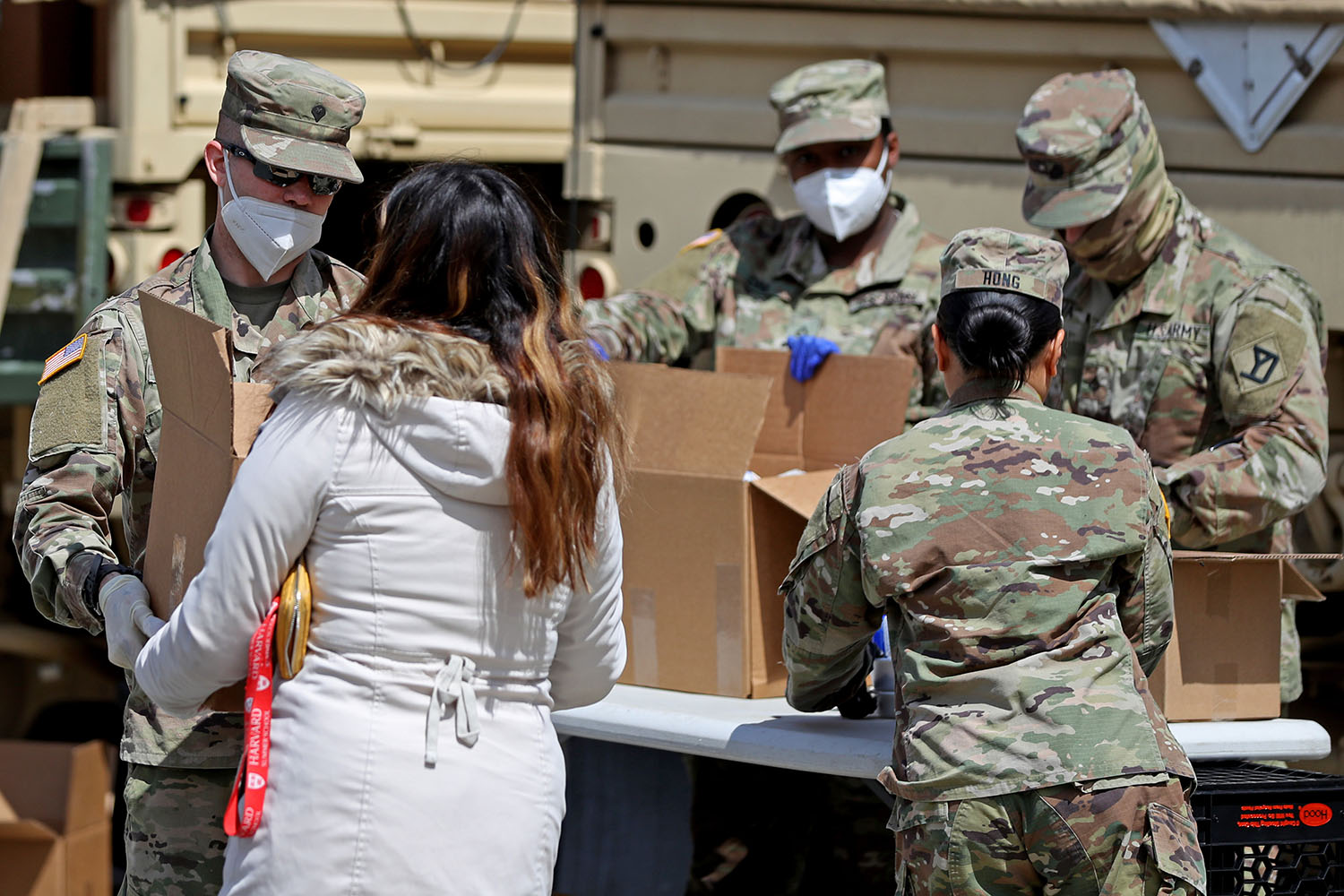 Nearly three dozen House Democrats on Wednesday demanded the Pentagon and Department of Homeland Security explain why the Trump administration will no longer cover the full cost of National Guard deployments in 47 states and territories but will continue paying all the costs for Texas and Florida.

The lawmakers, led by Reps. Cheri Bustos (D-Ill.), Deb Haaland (D-N.M.) and Max Rose (D-N.Y.), assert in a letter shared with POLITICO that while the decision to now cover 75 percent of the Guard’s coronavirus relief efforts is the minimum allowed by law, it’s “not consistent” with past practice in federally-declared emergencies.

“For months, the federal government has covered all the costs for these crucial deployments, but now the Administration reverted to the statutory minimum, demanding that states contribute 25%,” they write to Secretary of Defense Mark Esper and Homeland Security Secretary Chad Wolf, who oversee the Federal Emergency Management Agency.

“This is not consistent with the treatment of these costs during previous disasters and undermines the overall response to the virus,” they add.

Multiple state leaders and the National Guard Association — which represents tens of thousands of Guard members — told POLITICO they don’t know of a single time in the past that states were required to shoulder part of the cost of a federal deployment like this, while the Trump administration has argued that such cost-sharing is common.

“In order to help states respond to the pandemic, the Federal Government took the unprecedented step to fully fund National Guard deployments,” a senior administration official told POLITICO. “Now, as conditions warrant, it should be common sense that States will resume normal cost sharing.”

The discrepancy appears to be the result of who has paid the bills. The coronavirus pandemic has been the first time that FEMA has covered 100 percent of the cost of National Guard deployments in a national emergency. But in the past the Defense Department has covered the full cost in some emergencies.

The lawmakers are also demanding an explanation on the Trump administration’s decision to continue covering all of the cost of the Florida and Texas National Guard troops, as POLITICO reported on Tuesday, while cutting back funding for all other states.

“Why, for god’s sake, are Florida and Texas set aside?” Bustos said in an interview. “It’s not like those are the only two states in the nation with hot spots. And if you call any governor in the nation, they’ll tell you they can’t, all of a sudden, take on 25 percent of the cost.”

In their letter Wednesday, the lawmakers also decried the perception that the move is intended to curry favor with two states that voted for Trump in 2016 and are hotly contested this year. While those states currently have the highest number of people hospitalized, they do not have the most total coronavirus cases or the highest rates of people testing positive.

“Without a fuller explanation and as currently proposed, it creates the perception that politics may be impacting which and how states receive assistance,” the letter states.

The National Guard’s coronavirus relief deployment began in March for the states hit hardest early in the pandemic, and expanded to many more states in April. Governors that had mobilized troops under state active duty petitioned the Trump administration to activate them under what’s known as Title 32 — meaning they would stay under state command but soldiers and airmen would receive federal pay and benefits.

When Title 32 was set to expire in June, just one day before many Guard members would have qualified for federal education and retirement benefits, a bipartisan outcry pressured the Trump administration to issue an extension until late August.

On Monday, after POLITICO reported that some states had already begun pulling troops off the front lines in preparation for the mission’s expiration, the White House approved an extension until the end of the year. But that same memorandum cut back the level of funding for all states — except Texas and Florida — by 25 percent, arguing that the country is entering “a period of increased economic activity and recovery.”

In their letter, the lawmakers are now calling for the federal deployment to last for the duration of the public health emergency rather than issue any more “piecemeal, last-minute extensions.”

“Covid-19 doesn’t act on specific timelines,” the lawmakers wrote. “The continued failure to adopt conditions-based activations and the certainty they would provide undermines states’ public-health strategies. While we appreciate the new extension to December 31st, that deadline is just as arbitrary as the previous one set for August 21st.”

“If recent trends are any guide, this pandemic is far from over,” the letter adds. “Give the states the help they need, for as long as they need it. Do it in a consistent manner. …There is no reason to continue playing bureaucratic and political games with either our governors or our neighbors in uniform.”

Bustos told POLITICO that based on the administration’s record of not responding to Democrats’ questions and document requests, lawmakers are “not holding our breath on an answer” and is prepared to take more steps, including calling a hearing or attempting to hold up funding if necessary.

“We have authorizers who have signed this letter,” she said. “We have Oversight Committee members. We have appropriators,” she said. “We’ll take this to the next level if we have to.”