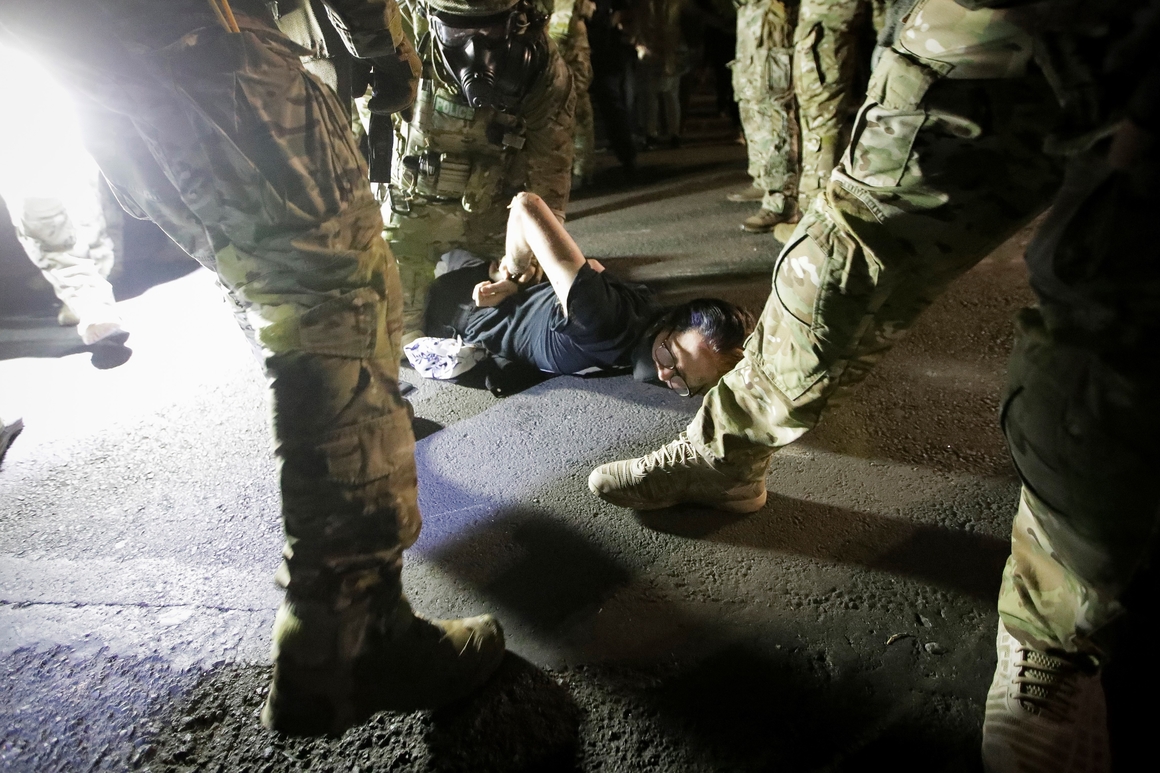 Lawyers running a training session for officers deploying to protect besieged federal property extolled the “beauty” of a protest-response strategy that some legal experts have criticized as potentially unconstitutional, according to an audio recording obtained by POLITICO.

The training highlights the fierce legal debate over the Trump administration’s push to send federal officers into American cities, sometimes against the wishes of local officials. Images of violent clashes and of vandalism have aired non-stop in conservative media outlets, while President Donald Trump has cast his 2020 rival, former Vice President Joe Biden, as dangerously indulgent of “anarchists” and “thugs.”

Videos have shown federal officers in Portland pulling protesters into unmarked vans to transport them for questioning. Some protesters have said they were detained without probable cause and never charged with crimes. The incidents have drawn pointed scrutiny to how the Department of Homeland Security legally defends the detention and transportation of protesters.

The audio POLITICO obtained includes an explanation from government lawyers of how to use little-known federal regulations to remove people from protests, but legal experts reacted to the training differently: Civil liberties advocates who reviewed a transcript of the audio raised concerns that the training amounts to a playbook for punishing freedom of speech and assembly. Former law enforcement officials, meanwhile, say the recommended tactics help them de-escalate raucous protests without bringing stiffer criminal charges against participants.

A viral video of DHS officers in combat fatigues pulling a protester into an unmarked van triggered national concerns about the department’s legal reasoning. And when a top DHS official said the response to the van video “got kinda spun out of control with the rhetoric about what happened,” those concerns grew even more.

The audio POLITICO obtained casts new light on how DHS officers are trained regarding protests — and on what tactics their lawyers advise them to use.

In the audio from early July, attorneys for Federal Protective Services (FPS), the division of the Department of Homeland Security tasked with protecting federal buildings and the people in them, can be heard explaining to officers from different components of DHS what legal tools they would have as temporary FPS officers.

“Why we’re bringing these up is that these regulations are punitive, meaning they’re criminal in nature, and they’re a very useful tool in dealing with First Amendment-type activities that end up having unlawful activities occurring during that protest or demonstration,” one of the attorneys said.

“And why do I say they’re a good tool? Because as we go through this, you’re going to see that it’s a quick way to address someone that’s unruly or doing some type of criminal activity that really doesn’t warrant [inaudible] of a felony or serious offense. And often in our experience, people want to be arrested,” the attorney continued. “They’re at that particular demonstration or protest to make a statement. Often, that statement includes being arrested, and, in their world, hopefully getting on the news, on the internet.”

Later in the recording, the lawyer promoted the benefits of “cite and release.”

“This is what I call the beauty of this approach, meaning that, particularly during demonstrations and protests, it allows us to pick someone out of the crowd that’s basically causing trouble and committing a criminal offense, we remove that person from that locality, we cite them under the rules and regulations, then we release them, basically taking them out of the fight at that protest or demonstration venue,” the lawyer said. “And it’s a good process, it gets them away from the situation, particularly if they are a rabble-rouser.”

The lawyer explained that the regulations had lower penalties than other potential criminal charges: The maximum penalty for violating them is 30 days of incarceration and $5,000 fine.

“Which gets to the point that they’re almost like a traffic violation,” the lawyer continued. “So minimum impact on the public and on that particular subject. And the intent in using these, particularly during civil unrest is that it allows us to remove people from the site where they’re causing trouble.”

A second lawyer then expounded on that point.

“It gives you this really dynamic tool to quickly deal with misconduct that doesn’t rise to the level of custodial arrest, where you can cite and release, remove someone from the scene, and in a protest climate, demonstration climate where things are hectic and perhaps chaotic, that can be a very valuable tool,” the lawyer said. “FPS officers on the local grounds there will tell you, being able to take people out of the mix and reduce some of that chaos, take them away from that, cite and release, something less than full custodial arrest, gives you a really invaluable tool of being able to maybe reduce some of the stress of that current environment.”

One specific regulation the lawyers highlighted is a federal provision criminalizing the failure to follow orders from law enforcement––referred to as “conformity.”

“What it means is that when people don’t follow your lawful orders, whether they’re verbal by what you say or they’re written down on the signage that’s posted up at the entrance, they can be charged with failure to conform with those directions,” a lawyer said. “Again, the key requirement here is notice…We cannot assume out there that people know about these criminal regs.”

The lawyer said officers should verbally tell people they were violating the regulation before detaining them––ideally, more than once.

Legal experts who reviewed a transcript from the audio didn’t come to a consensus on it.

Mary McCord, a former top Justice Department official who now helms Georgetown Law’s Institute for Constitutional Advocacy and Protection, said this training doesn’t explain the troubling behavior by DHS officers in Portland. “This doesn’t sound crazy to me,” she said. “He talks about troublemakers and ‘unruly,’ but always ties it to a criminal offense,” she added. “If you had facts that could tie it to First Amendment retaliation, that would be troublesome. Certainly in this excerpt, I don’t see that at all.”

She added that the viral videos out of Portland are troubling specifically because the officers don’t appear to have probable cause to make the controversial arrests. In the training excerpts, she added, the FPS lawyers explain that they must have probable cause.

Barbara McQuade, a former U.S. attorney, said the FPS lawyers’ directions on using criminal regulations had upsides and downsides. “It doesn’t strike me as awful that they’re looking to find a way to remove people who are committing crimes that are escalating the danger at a protest, and not being so heavy-handed as to charge people with felonies,” she said. But she added that the regulations bring concerns about arbitrary enforcement. “You’ll never know who’s not getting charged.”

Norman Reimer, the executive director of the National Association of Criminal Defense Lawyers, told POLITICO that the discussion of using criminal regulations to de-escalate protests is an example of overcriminalization, which his group has long opposed. The regulations, he said, are “virtually unknowable” to regular people — and DHS appears to be weaponizing them to undermine protesters’ First Amendment rights.

“The use of these arcane provisions to single out people who are ‘unruly’ or ‘rabble-rousers’ invites arbitrary enforcement based on vague and illusory standards,” he said. “What makes someone unruly or a rabble-rouser when they are exercising their right to protest? How loud they are? Their choice of words? What their placard says? This is not law enforcement. This is intimidation.”

Faiza Patel of the left-leaning Brennan Center for Justice also raised concerns about DHS’s enforcement of criminal regulations, noting that protesters often struggle to hear police officers’ commands during loud hectic situations. And she wasn’t impressed by the lawyer’s claim that protesters want to get arrested. “It is shameful that federal agents view protestors as wanting to get arrested for a bit of internet fame, rather than as Americans who are concerned about fundamental issues of justice and equity,” she said.

And Emerson Sykes of the American Civil Liberties Union said the training appeared to be “saying the quiet part loud” by telling officers they could arrest and remove so-called troublemakers for comparatively small regulatory violations.“The idea that pushing back against authority in any way can be used as a pretext for arrest is deeply troubling,” he said.