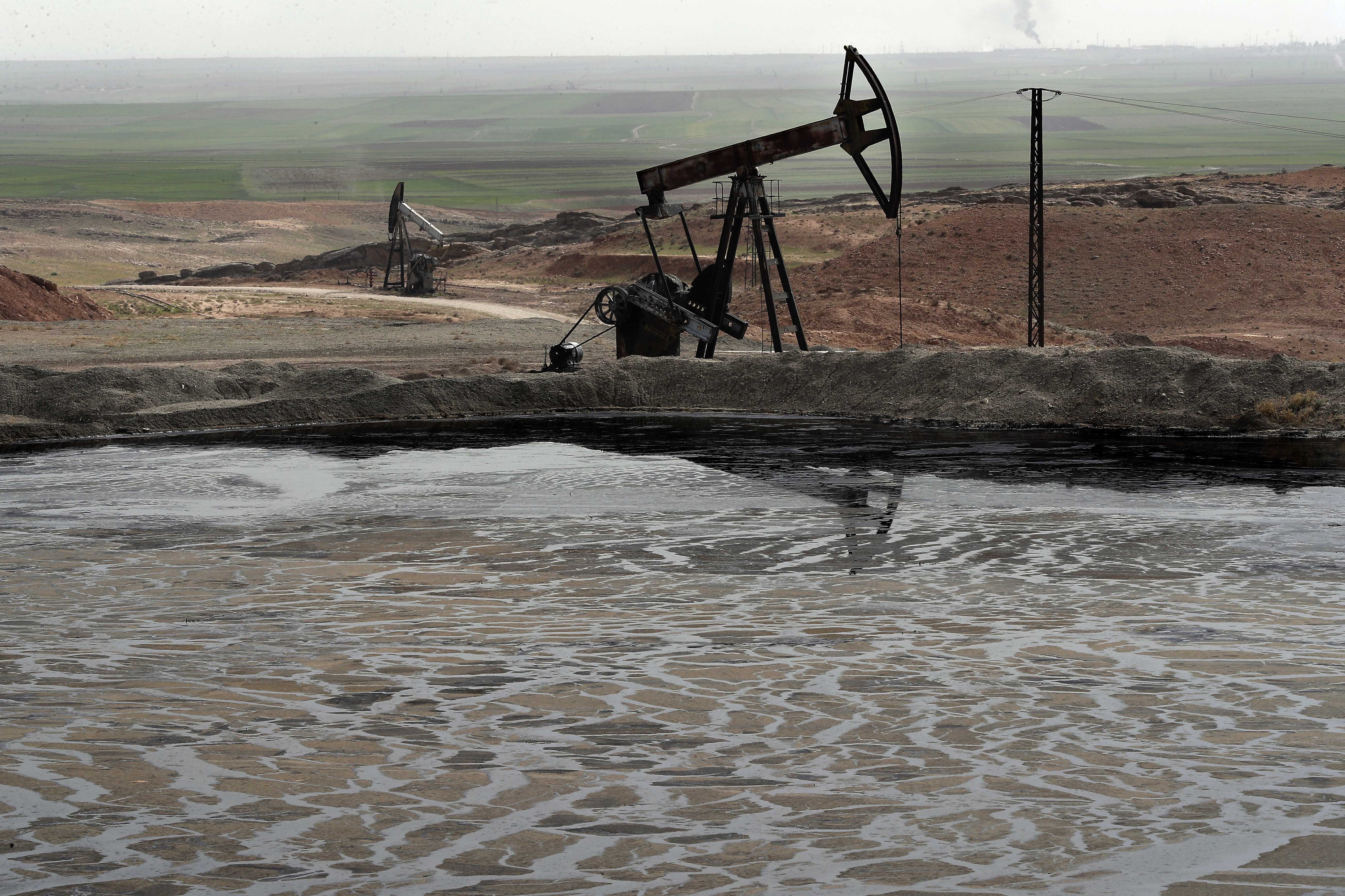 A pond of oil at an oil field controlled by a U.S-backed Kurdish group, in Rmeilan, Hassakeh province, Syria. | AP Photo/Hussein Malla

An American company has inked a contract with Kurdish authorities in northeastern Syria to develop and export the region’s crude oil under a secretive deal approved by the U.S. government months after President Donald Trump announced he was leaving U.S. troops to “secure the oil,” multiple people familiar with the project told POLITICO.

The agreement reached by a little-known firm helmed by politically connected former military and diplomatic officials has already angered the government of Syrian President Bashar Assad, which does not recognize the Kurdish authorities as autonomous. The Syrian Foreign Minister called the deal illegal and said it is aimed at “stealing” Syria’s crude.

The deal advances a longtime U.S. goal to help the Syrian Kurds, which have been staunch U.S. allies in the fight against the Islamic terrorist group, to strengthen their position in the region, where they face not just Assad’s brutal regime but also the Turkish government — and provide new means to help address the desperate needs of civilians that have been caught in the Syrian civil war.

The company, Delta Crescent Energy LLC, was incorporated in Delaware in February 2019, according to its business license. Its partners include former U.S. ambassador to Denmark James Cain; James Reese, a former officer in the Army’s elite Delta Force; and John P. Dorrier Jr., a former executive at GulfSands Petroleum, a U.K.-based oil company with offices and drilling experience in Syria.

It has been in talks with the Kurds for more than a year but only received a license from the Treasury Department’s Office of Foreign Assets Control for the work in April, according to a State Department official and a Syrian source familiar with the discussions. The arrangement is to refine and use some of the oil locally but also export some through northern Iraq and Turkey, they said.

The Treasury Department has multiple sanctions against Syria’s oil market. In a March 2019 the Trump administration issued the orders targeting companies that deliver or finance petroleum shipments of Syrian oil on behalf of the country’s government. The effort is designed to punish the Assad regime for atrocities committed amid the country’s civil war.

However, the Pentagon and State Department have long been working to enable the Syrian Kurds to harness the crude oil in the region, a former Trump administration official told POLITICO. The idea is that revenue from the oil could help the Kurds deal with the dire humanitarian situation in the war-torn country, including overflowing refugee camps from years of civil war, the person said.

“The goal is to get the production back up to where it was before the civil war and sanctions,” said Ambassador Cain. “It was very much our effort to keep the State Department advised — not seeking approval — but wanting to know if this was contrary to American policy interest. Nobody told us no.”

A spokesperson for the Syrian Democratic Forces, which controls the region and is allied with the United States, declined to comment. A Treasury Department spokesperson also declined to discuss the deal on Monday.

“Treasury does not generally comment on or provide details on license applications or specific licenses that have been issued as the information contained within these licensing applications and determinations may be protected by the Privacy Act, the Trade Secrets Act, or other regulations governing OFAC’s licensing authorities,” the spokesperson said in an email.

The deal first came to light during a Senate Foreign Relations Committee hearing on Thursday, when Secretary of State Mike Pompeo was questioned about it by Republican Sen. Lindsey Graham of South Carolina.

Pompeo said the administration supports the deal and said it is intended to “modernize” the oil fields. “The deal took a little longer … than we had hoped, and now we’re in implementation,” he said.

Graham told POLITICO on Monday that the company will brief him this week on its plans.

“I think this company’s going to improve the viability of the northern oil fields to make them more productive,” Graham said. “Conceptually it makes sense that we should, instead of just writing checks, help people help themselves.”

The State Department is leading the effort under James Jeffrey, United States Special Representative for Syria Engagement and the Special Envoy for the Global Coalition to Defeat ISIL, and his deputy, Joel Rayburn, the former Trump administration official said.

However, they have sought to keep the deal quiet for fear that Russia, which backs Assad’s regime and deploys military and paramilitary forces across the region, might retaliate, both the State Department official and Syrian source said.

A State Department spokesperson declined to comment on the contract but noted that the U.S. government considers requests “on a case-by-case basis to authorize U.S. persons’ involvement in activities that would normally be prohibited.”

“We are not involved in the commercial decisions of our local partners. However, as a general matter, we work to ensure that our sanctions are in line with our foreign policy interests and target the Assad’s regime continued violence against the Syrian people,” the spokesperson said.

“Syrian oil is for the Syrian people and we remain committed to the unity and territorial integrity of Syria,” the spokesperson added. “The United States government does not own, control, or manage the oil resources in Syria. The populations in areas liberated from ISIS make their own decisions on local governance.”

Delta Crescent has so far been the only company to receive a license to work in Syria since U.S. military forces all but abandoned the country in October.

Trump at the time ordered only enough troops to stay in the war-ravaged country to allow for “keeping the oil.” The U.S. used residual forces to secure the oil fields in the eastern part of the country and to continue fighting Islamic State militants. The country’s oil field were seized by ISIS during the civil war. Years of fighting that forced ISIS to retreat left the production infrastructure devastated, however.

Delta Crescent operates under the protection of the SDF and the U.S. military in northeast Syria, the sources said. The company’s plan is to sell the Syrian oil to various customers in the region, potentially including Assad, Turkish-backed rebels and Iraqi Kurdistan, all of whom could then sell it on the international market, the Syrian source said.

Cain said the company would sell its products “directly into the international market at market prices so that they can use the proceeds to rebuild their economy and help their people,“ he said.

The company gained notoriety several years ago when North Dakota regulators sued it for providing private security in the state without a license after it sent agents to crack down on protests against the Dakota Access pipeline, operated by a company owned by Trump donor Kelcy Warren.

TigerSwan denied all wrongdoing and the state dropped the case after the company left North Dakota.

Attempts to reach Dorrier were unsuccessful. He left GulfSands in the late 2000s, according to news reports at the time. A GulfSands spokesperson did not reply to emails seeking comment.