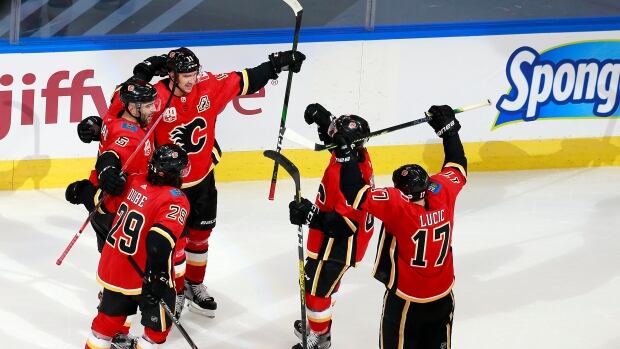 The Calgary Flames and Winnipeg Jets had little history between them because they’d only met once in this truncated NHL regular season.

But playoff animosity didn’t take long to brew in Calgary’s 4-1 win over the Jets to start their qualifying round series Saturday in Edmonton.

Winnipeg didn’t recover from losing centre Mark Scheifele to a left-leg injury in the first period. The Jets were outshot 33-18 and dominated by the Flames in the second period.

Winnipeg Jets centre Mark Scheifele needed help getting off the ice after being hit along the boards by Matthew Tkachuk. 1:44

Tkachuk’s reputation is one of playing on the edge, but the forward insisted what happened to Scheifele was bad luck.

“It was such an accident and I feel terrible about it,” Tkachuk said. “I hope he’s OK because he’s a top player in this league and he’s great for the game.”

The potential loss of Scheifele would be devastating for Winnipeg’s Stanley Cup prospects. The Jets’ No. 1 centre had 73 points, including a team-leading 44 assists this season.

“Arguably your top offensive player and log so many minutes. You can’t replicate what he brings to our lineup.”

“It was a really good complete game from power play to penalty kill to goaltending, five on five I thought we did a great job tonight,” Gaudreau said.

Tobias Reider’s shorthanded goal in the 2nd period would hold up as the game winner in Calgary’s 4-1 win against Winnipeg. 1:03

Andrew Copp countered for the Jets in the first period.

Cam Talbot earned his first playoff win as a Flame with 17 saves.

Whether it was the 33-year-old or David Rittich who would get the nod for the opener of the best-of-five series was much-debated in Calgary, and not revealed until game time.

In part 5 of 10, Rob Pizzo breaks down the only all-Canadian matchup in the qualification round.  1:11

Talbot had less work than Vezina Trophy nominee and Jets counterpart Connor Hellebuyck, who stopped 29 shots in the loss.

“Every save is important in a game like that especially when the guy at the other end is up for the Vezina,” Talbot said. “You know he’s not going to give up too many.

“You can’t say enough about how well we played in our d-zone tonight. I didn’t have to make a ton of Grade A saves tonight.”