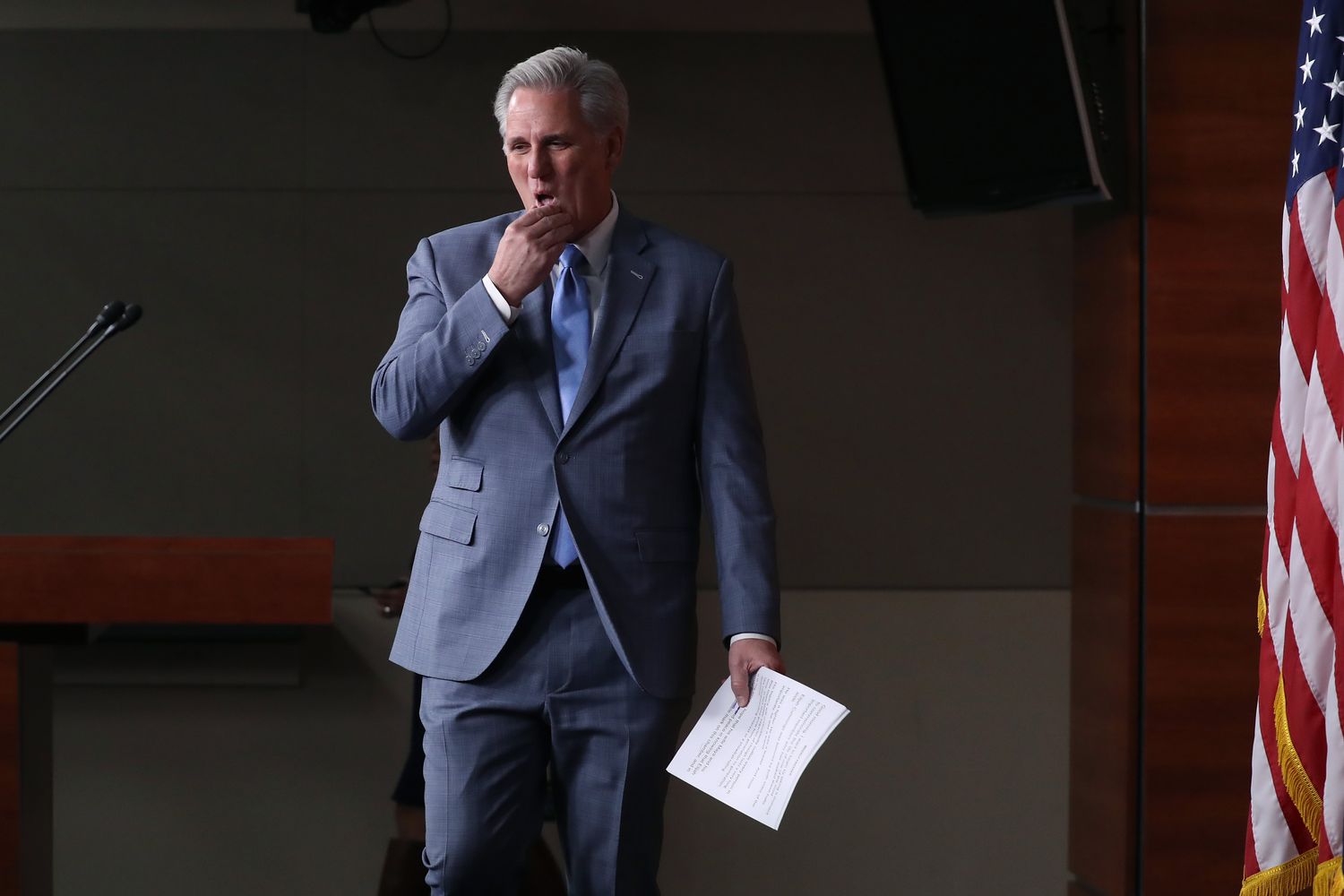 House Republicans aren’t rushing to fill an empty seat on the high-profile House Intelligence Committee that has remained vacant for months, even as Congress grapples with potential foreign interference in the upcoming elections.

House Minority Leader Kevin McCarthy is taking his time deciding who should replace former Rep. John Ratcliffe — now the Director of National Intelligence — on the prestigious panel, according to sources familiar with the California Republican’s thinking, and a pick isn’t expected anytime soon. President Donald Trump tapped Ratcliffe to be the nation’s spy chief five months ago, and the Senate confirmed him in May.

McCarthy’s selection will surely create some sore feelings in the conference as dozens of House Republicans are vying for a spot on the panel, despite it becoming a hotbed for some of Capitol Hill’s most public partisan brawls the last few years, culminating with the president’s impeachment.

And McCarthy’s choice could signal whether he wants to reverse the partisanship that’s wracked the panel in the era of Trump or continue down a more similar path. With two more Republicans on the panel set to retire, the committee — the smallest one in the House with 21 total current members — could undergo a revamp.

But Democrats contend that leaving the slot open this long is another symptom of the disregard Republicans have displayed for intelligence matters, pointing to the GOP’s recent boycott of the committee’s proceedings since the coronavirus pandemic forced the panel to conduct hearings, briefings and roundtables virtually.

“It’s reflective of a lack of seriousness that the minority is bringing to the responsibilities of the committee,” Intelligence Chair Adam Schiff (D-Calif.) told POLITICO.

“It’s a disservice to their caucus and to the country,” he said, adding the incomplete roster “impedes the minority’s voice in the process. They’re undermining themselves.”

Other Republicans on the panel, who have begun attending the committee’s limited closed-door sessions in recent weeks — including briefings from the Trump administration on election security threats and intelligence reports that Russia offered bounties to Taliban-linked militants to kill U.S. troops in Afghanistan — contend that being down to just eight members hasn’t impeded their oversight efforts. And they say it’s natural for leadership to take its time with such a weighty decision.

“They have no idea how much time we’re spending down in Intel and going about our own work. I don’t report to them when we’re doing Intel work, the phone calls I’m having,” said Rep. Brad Wenstrup (R-Ohio), adding he recently had a secure phone call with outgoing Defense Intelligence Agency chief Army Lt. Gen. Robert Ashley about supply chain issues.

“And you tell me how much Intel work they were doing during impeachment and the last three years? Give me a break,” he added.

The Intelligence Committee is the only permanent committee in Congress whose members are hand-picked unilaterally by the Republican and Democratic leaders in the House, meaning they retain tight control over the committee’s business and tend to appoint close allies.

And McCarthy is fielding interest from all across the GOP conference.

Wenstrup said that even before Ratcliffe was confirmed, over a dozen younger members had casually approached him about how to get a spot on the committee, asking: “‘What did you do? How did you make your case?’”

Further complicating McCarthy’s decision-making process: There is a chamber rule that each side of the aisle must have at least one member who also serves on the House Judiciary Committee. Ratcliffe sat on both panels when he served in Congress. That means Ratcliffe’s replacement must also be plucked from the Judiciary Committee, leaving McCarthy a more limited bench to choose from.

Speculation has run rampant about who might get the seat, according to sources on both sides of the aisle, with names rising and falling as the game of musical chairs has dragged on for months. At one point, there was even the possibility that Rep. Jim Jordan of Ohio, a top ally of the president who temporarily served on the committee during Trump’s impeachment hearings and is now the top Republican on Judiciary, might somehow return.

Rep. Guy Reschenthaler (R-Pa.), a Navy veteran who serves on Judiciary and is well-liked within the GOP conference, was considered a possible contender, but his freshman status likely prohibits him from receiving such a prestigious appointment; same goes for freshman Rep. Kelly Armstrong (R-N.D.).

Retiring Rep. Martha Roby (R-Ala.), who served on the Select Committee on Benghazi, could be a placeholder pick, though Intel would be a tough assignment to drop into for only a few months.

Other Republicans on the House Judiciary Committee include Rep. Mike Johnson of Louisiana, a former attorney who served as one of Trump’s impeachment surrogates; several members of the hard-line Freedom Caucus, including Freedom Caucus Chair Andy Biggs of Arizona; and veteran Rep. Steve Chabot of Ohio, who unsuccessfully sought the top GOP spot on Judiciary.

McCarthy will have more flexibility whenever he selects members to replace retiring Texas Reps. Will Hurd, a former CIA officer, and Mike Conaway, who led the panel’s investigation into Russian interference in the 2016 election after Nunes recused himself.

Outside of the Judiciary Committee, Rep. Liz Cheney (R-Wyo.), chair of the House Republican Conference and a vocal foreign policy hawk, has also been mentioned as a potential candidate for Intel, though that was before her colleagues accused her of undermining Trump’s administration for criticizing its response to the coronavirus and foreign policy decisions during a recent closed-door meeting.

Other names that have been floated include Reps. Blaine Luetkemeyer (R-Mo.) and Andy Barr (R-Ky.). Both sit on the House Financial Services Committee and could apply their fiscal knowledge to intelligence and national security matters.

The momentum around Barr’s candidacy has stalled, though, after the unexpected death of his wife in June. The Kentucky Republican, who said he is focused on raising his two daughters, returned to Capitol Hill just before the August recess.

Historically, the panel has attracted lawmakers who want to do serious intelligence work; committee members deal with the nation’s most closely-held secrets and most often meet in secure classified settings, away from the glare of the C-SPAN cameras. But the panel has transformed in the Trump era and become more of a partisan breeding ground, as evidenced when the committee’s Republicans called on Schiff to resign.

Despite the lack of a full roster, the committee’s work has continued.

Last week the panel approved its annual intelligence policy bill — though in a straight party-line vote, instead of unanimously by voice vote. It’s also working with the U.S. intelligence community to finalize its “deep dive” on China, focused on the various national security threats posed by Beijing, and reviewing the pandemic and how the clandestine community is postured to analyze global health issues.

McCarthy initially came under fire at the start of this Congress, accused of slow-rolling the committee’s work when he took weeks to name someone to an open spot on the panel while Democrats were eager to restart the investigation into Russian interference in the 2016 election.

McCarthy eventually tapped Ratcliffe for the role, but personally informed at least 70 lawmakers who sought the spot on the panel and didn’t get the seat, which delayed the announcement.

“If anyone were to read anything into this other than it’s a procedural process they would be wrong,” Rep. Chris Stewart (R-Utah) told POLITICO. “It’s just going to take a little while and of course we take our Intel responsibilities seriously.”

Democrats, however, say leaving Ratcliffe’s spot empty is a sign of the GOP’s disconnect at a critical time. With less than 100 days until the election, top Democrats including Speaker Nancy Pelosi (D-Calif.) have criticized the Trump administration for withholding information on possible Russian election meddling.

“Honestly, I wish that the minority would just be a little more involved in what’s going on in the oversight of the intelligence community,” said Rep. Raja Krishnamoorthi of Illinois, one of four new Democrats named to the panel last year.

“We can’t oversee the intelligence community in a partisan way, it has to be bipartisan,” he added, especially when the Trump administration is “trying to hide the ball in terms of information about the intelligence community, not communicating with us in the way that they should and also preventing career public servants from doing their duty and showing up to testify about vital matters.”