Microsoft has escaped Trump’s wrath so far. That could be about to change. 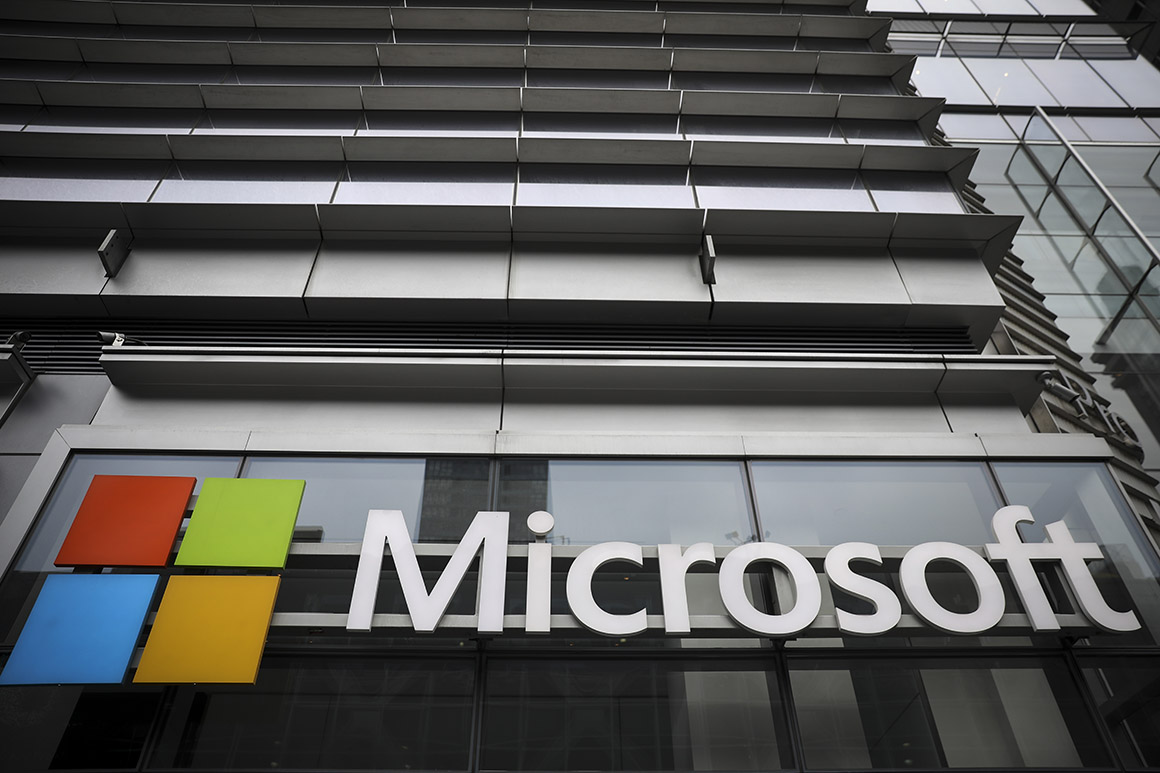 The key to Microsoft’s less polarizing reputation may be that it has simply been less of a target for President Donald Trump and lawmakers. | Drew Angerer/Getty Images

Microsoft has successfully avoided angering President Donald Trump for years. Now the software giant’s bid to buy TikTok is plunging it deep into some of the tech industry’s most volatile Washington fights.

The company has kept a less contentious profile than peers like Amazon and Google — a position that likely helped open the door to its potential acquisition of the video-sharing app. That deal would give Microsoft a social media platform poised to challenge the likes of Facebook and Snapchat.

But nabbing TikTok would also throw Microsoft into the middle of three major battles raging between the tech industry and the administration: the policing of social media, the power of Big Tech and ever-more combative U.S.-China relations.

Microsoft has done its best to tilt the odds in its favor. CEO Satya Nadella has built a rapport with Trump since the president took office, for example sitting alongside the president at a roundtable on tech early in Trump’s term. The company has also cultivated relationships with those close to the president, including hosting First Lady Melania Trump last year at its Redmond, Wash., headquarters.

But the key to the company’s less polarizing reputation may be that it has simply been less of a target for Trump and lawmakers, whose anger at the tech industry has focused on issues with little relevance to how Microsoft makes money, such as protections for consumer internet data, politically charged messages on social media and dominance in online markets.

Microsoft, as a result, has had fewer fires to put out in discussions with government officials.

“They have engaged and they haven’t pissed off,” said a tech industry official with knowledge of the company’s Washington operations, who asked for anonymity to speak candidly. “I don’t think that Microsoft necessarily has a special relationship, but I think that they have a relationship where they are better than the alternative.”

The usefulness of that position became clear over the weekend when Nadella called Trump to convince him of the TikTok deal’s merits. Trump had said late Friday he intended to ban TikTok from the U.S., but then declared he would be open to a sale after conversations with administration officials, lawmakers and Nadella.

In a blog post on Sunday, Microsoft acknowledged its acquisition talks and said it “appreciates the U.S. Government’s and President Trump’s personal involvement as it continues to develop strong security protections for the country.” The company declined to comment for this story.

The soft power outreach has been clear. Nadella has accompanied other tech leaders when asked to advise the White House on policy matters, and more recently joined dozens of business leaders tapped to help the president navigate economic fallout from the coronavirus pandemic. And Microsoft President Brad Smith promoted computer science education alongside Trump’s daughter and senior advisor Ivanka Trump at a Virginia school in 2017.

Microsoft hasn’t completely shied away from opposing Trump administration policies it finds objectionable. Nadella is among the CEOs who urged the White House not to abandon the Paris Climate agreement, and has spoken out against several of Trump’s immigration decisions. Indeed, Microsoft brought one of the Supreme Court lawsuits that ultimately reversed Trump’s move to end the Deferred Action for Childhood Arrivals program.

But Nadella has, so far, avoided the clashes that other CEOs have had with Trump. Twitter, Facebook and Google-owned YouTube have run afoul of Trump for taking action against his misleading social media posts. Amazon has drawn ire because founder Jeff Bezos also owns The Washington Post, whose news coverage Trump has at times lambasted.

Meanwhile, Microsoft has largely stayed out of the crosshairs on divisive policy issues like privacy, antitrust and content moderation — three issues that have dogged its fellow tech giants and, just last week, forced the CEOs of Amazon, Apple, Facebook and Google to testify before Congress.

Microsoft’s more favorable position is “certainly serving them well,” said Matt Perault, a former Facebook lobbyist who now leads Duke’s Center on Science & Technology Policy. But “I’m not sure that’s the best basis for making a decision on who can acquire a company.”

“It’s not clear to me that Microsoft is best suited to grow and improve the app, but it’s essentially impossible for Apple, Amazon, Google, and Facebook to bid given the political dynamics right now,” Perault added.

The TikTok acquisition could change that more favorable position.

Wading into the social media morass

An acquisition would insert Microsoft into one the most partisan and deeply unresolved debates surrounding internet companies: how they should moderate controversial online content and whether Congress needs to amend Section 230 of the Communications Decency Act, a decades-old law that largely absolves platforms of legal liability for what their users post.

Atkinson said the deal could ultimately pay off for Microsoft. Trump could suffer blowback from TikTok’s 100 million American users if he banishes the app altogether, so having the app snapped up by a U.S. company may be the safest political option, he said.

With its viral videos and ballooning audience, TikTok puts Microsoft at the center of the social media debates in a way it hasn’t yet faced with LinkedIn, which it also owns. TikTok hasn’t had the same issues as Facebook, YouTube and Twitter with terrorism, hate speech and political interference — but it was thrust into the political spotlight after teens used the platform to reportedly sabotage a Trump campaign rally. Trump supporters on TikTok, meanwhile, use hashtags including #trump2020, #trumptrain and #votetrump to amplify their support.

“You’ve seen a bigger target on the most dominant players. It doesn’t mean that the same concerns around content moderation can’t apply to a smaller player, like a Twitter or a TikTok or even a Reddit,” said Chris Lewis, president and CEO of progressive advocacy group Public Knowledge.

A reminder that Microsoft is big tech, one of the biggest

The purchase of TikTok itself is unlikely to raise antitrust alarms for Microsoft, but it comes at a time when Washington regulators are hypercritical of the tech industry’s acquisitions and overall market power. Already, Microsoft is part of a broad Federal Trade Commission review of mergers from the past decade that also targets Amazon, Apple, Google and Facebook.

And Congress appears eager to engage antitrust efforts to pursue companies for a range of woes. Lawmakers used last week’s hearing of tech CEOs — called because of antitrust concerns — as an opportunity to go after the companies on topics ranging from alleged conservative censorship to China’s pursuit of U.S. tech intellectual property.

Microsoft, with a market cap of $1.6 trillion, has separate antitrust headaches to deal with. Last week, Slack filed a complaint with the EU’s antitrust authority against Microsoft for allegedly tying its Microsoft Teams to the rest of its Office products, raising the prospect of a new competition challenge for the company.

Antitrust fights are familiar territory for Microsoft, which battled claims from both the Federal Trade Commission and Justice Department throughout the 1990s over allegedly unfair business tactics used to prop up its PC business. At the time, then-CEO Bill Gates delivered his own fiery remarks at a much-watched Capitol Hill hearing — contentious moments the company has worked not to revisit.

Lewis, whose group opposes monopolization in the tech industry, said it was too early to tell whether the potential Microsoft acquisition would impact market competition in the social media space. He said he’ll watch how Microsoft handles data privacy and content moderation, and whether TikTok remains a viable alternative to other social media platforms.

Taking flak from the firestorm over China

Purchasing TikTok also puts Microsoft at the crosscurrent of the U.S. and China in their fight of technology dominance. Already the prospect of selling TikTok has angered the Beijing government and Chinese citizens, who have taken it as the U.S. playing the national security card to capture one of China’s most globally successful internet companies. (The Chinese version of TikTok operates independently but they’re both subsidiaries of the same company.)

Wang Wenbin, a spokesperson for China’s Ministry of Foreign Affairs, told reporters Tuesday that the U.S. has “stretched the concept of national security” in the TikTok case.

Technology news from Washington and Silicon Valley — weekday mornings, in your inbox.

“If everyone were to follow the US’s practice then anyone can invoke national security to take similar measures against a US company,” Wang said. “The US should not open this Pandora’s box otherwise it will swallow the bitter fruit.”

Microsoft’s Smith said in January that China accounts for less than 2 percent of the company’s global revenue, which totaled $143 billion last fiscal year. That figure would be higher, he said, if not for the piracy of the company’s software. Nevertheless, Microsoft has longstanding business ties in China having first entered the market in 1992.

But Microsoft is also among the U.S. companies that have run into problems in China under the company’s Anti-Monopoly Law. In 2014, the country took seven months to agree to allow Microsoft to buy Nokia’s device business and required the companies to agree to limits on how it would use its patents. Not long after, Chinese antitrust regulators opened an antitrust probe into Microsoft’s distribution of its media player and browser.

Pressure could be coming from the U.S. as well. Trump’s top trade adviser, Peter Navarro, told CNN that the proposed deal between Microsoft and China is problematic because of Microsoft’s business in that country. Navarro said Microsoft should divest its business in China, if the purchase of TikTok goes through, to avoid potential conflicts.

“This is not a white-hat company,” Navarro told CNN, saying that it enables China’s censorship in order to do business there.

Scott Kennedy, a senior adviser and China expert at the Center for Strategic and International Studies, said timing of the deal is particularly bad for Microsoft’s China efforts.

“This is as high profile a case as there could be because it looks like the top political leadership has gotten itself into the middle of the negotiations right as the relationship is deteriorating along every single dimension,” Kennedy said.

Microsoft, he added, is “stepping into an amazingly loaded minefield right now.”

Leah Nylen and Alexandra S. Levine contributed to this report.