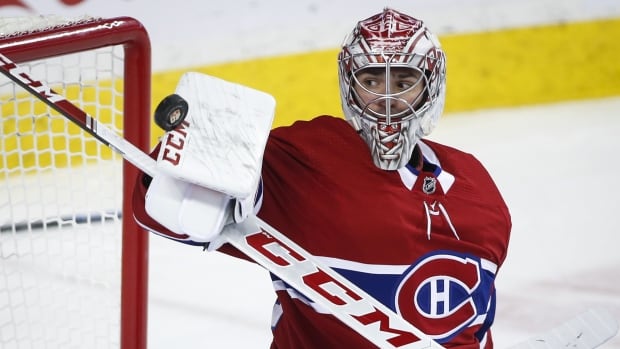 Shea Weber is fine being the underdog.

Good thing, because the Montreal Canadiens and their captain are certainly that heading into the team’s qualifying round series against the Pittsburgh Penguins.

The Canadiens were playing out the string, sitting 24th in the overall standings — some 15 points back of the seventh-ranked Penguins — when the NHL was shut down in mid-March by the COVID-19 pandemic.

Montreal had traded away a number of veterans and was already looking to next season. But when the league settled on a 24-team format in the spring for its summer restart to the 2019-20 campaign, the Canadiens just snuck in under the wire and now have a chance to rewrite their script.

Can Carey Price help the Habs pull off a huge upset over the Penguins? Rob Pizzo breaks down their chances.  1:17

All that’s standing in their way is a battle-tested opponent with championship pedigree led by Sidney Crosby and Evgeni Malkin.

“I’ve got no problem with that,” Weber said of his team being given little chance heading into the best-of-five series that opens Saturday at Scotiabank Arena inside the Toronto bubble. “We could be underdogs all day. That’s fine. It’s a situation that we’ve all been in before. Nobody should take offence to that and no one should listen to that.

It can, but Montreal figures to be in tough.

The club parted with veteran forwards Ilya Kovalchuk and Nate Thompson, as well as steady defenceman Marco Scandella, prior to the trade deadline, meaning that a number of young players will have increased roles much sooner than expected.

“You take what you have,” Canadiens head coach Claude Julien said. “We have a great opportunity here to grow.”

Pittsburgh, meanwhile, still has the nucleus of its Stanley Cup-winning teams from 2016 and 2017, and is hungry to respond after getting swept in the first round of last spring’s playoffs by the New York Islanders.

“Everyone’s in the same position, everyone’s got a clean slate,” Crosby said of playing a meaningful game for the first time in 4 1/2 months. “The fact that we can have our team healthy, we haven’t really had the luxury the whole year.

“Everyone’s excited to get going.”

Penguins head coach Mike Sullivan said staying within Pittsburgh’s structure is key against an opponent that will look to keep things tight defensively.

“It’s going to be a hard-fought battle.”

Alexander Kerfoot records 2 goals in the middle frame as Toronto doubles up Montreal 4-2. 0:31

And while most observers would disagree — a significant number of Canadiens fans are actually hoping their team loses and secures a 12.5 per cent chance of winning the No. 1 pick in the NHL’s second draft lottery so Montreal can select Quebec-born junior star Alexis Lafreniere — Sullivan said his locker room won’t be caught off guard.

“There’s a lot of parity in this league (and) there’s such a fine line between winning and losing,” he said. “The difference between the top-5 teams and the middle-of-the-pack teams is not that significant.”

Goaltender Carey Price and the Canadiens, however, know the hill they’ll have to climb in order to advance to the usual 16-team playoff bracket.

Weber, meanwhile, is convinced if things fall right, Montreal has a chance to do something special.

“You look at the history of playoffs, of the Stanley Cup over the years, strange things have happened,” said the defenceman. “Teams get on a roll at the right time, good goaltending, and stay healthy.