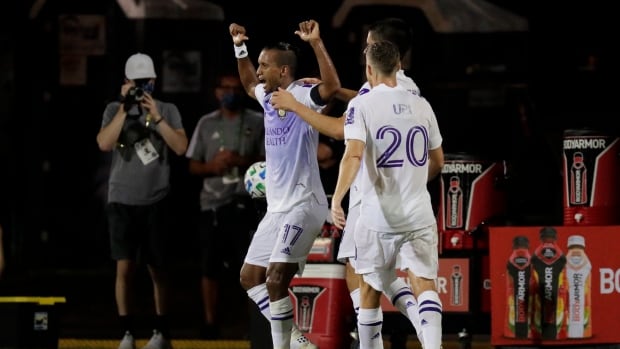 Nani scored a pair of first-half goals and Orlando City advanced to the MLS is Back tournament title match with a 3-1 victory over Minnesota United on Thursday night.

Orlando will play the Portland Timbers, who defeated the Philadelphia Union 2-1 in the other semifinal on Wednesday night, in the championship game on Tuesday.

Mason Toye pulled Minnesota within 2-1 with his first goal of the season in the 83rd minute, but the Lions withstood United’s attack down the stretch before Benji Michel’s goal late in stoppage time for the final margin.

“It was very satisfying for us because we worked the whole week just working as a team, making sure all the pieces were put together,” Michel said. “For us to be able to get the win was very, very good for us.”

Minnesota’s Chase Gasper had an early attempted that was pushed over the goal by Pedro Gallese. On the other end, Tesho Akindele’s chance off a cross from Ruan just barely sailed over the crossbar.

Nani gave Orlando the lead in the 36th minute, taking a long ball from Robin Jansson and shaking off defender Hassani Dotson before beating Minnesota goalkeeper Tyler Miller. Some seven minutes later the Portuguese winger who played for Manchester United made it 2-0 with a goal from distance.

There was some shoving between the two teams in the 73rd minute when Junior Urso’s foul resulted in a Minnesota free kick. Gallese came up big for the Lions, leaping to stop Raheem Edwards’ attempt.

“I thought we rushed everything,” Minnesota coach Adrian Heath said. “After the first 15 minutes, where we started the game really well, we needed an extra pass in the final third and we rushed it, we crossed it when there wasn’t anyone in the box. We made a lot of wrong choices in the final third tonight and that’s probably cost us dearly, I think.”

Heath was coach of Orlando City for four seasons before the team joined Major League Soccer in 2015. Heath led the Lions until July 2016, when he was fired.

Heath had not lost against his former club. The Lions are now led by Pareja.

“We have worked hard, and it has been, so far, difficult times for us. But the players just put all the excuses away, and then just kept going and going,” Pareja said. “And I think they’re happy. They’re playing with confidence and they accept each other and they understand this is day-by day. The guys who came from different countries, different clubs. They help us as well to gel.”

Minnesota’s Romain Metanire and Kevin Molino both had hamstring injuries and were on the bench to start the game. United centerback Ike Opara — the reigning MLS Defender of the Year — did not join the team in Orlando because of a pre-existing condition.

Orlando’s Chris Mueller, whose arm in a sling after the team advanced on penalties following a scoreless draw against LAFC in the quarterfinals, was in the starting lineup.

Lions striker Dom Dwyer had surgery last week on his left knee as is expected to be out for up to six months.

The month-long World Cup-style tournament has been played without fans at ESPN’s Wide World of Sports complex at Walt Disney World. Players have been sequestered at a pair of Disney resorts.