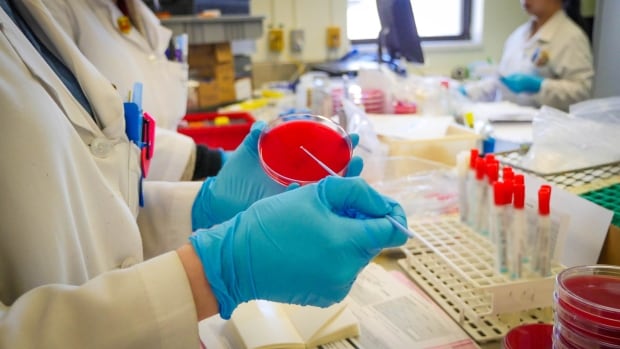 The NHL says the laboratories hired to conduct daily COVID-19 tests on players in Edmonton and Toronto keep their supply chains separate from the public’s to ensure never the two shall meet.

Roughly 1,500 samples are collected and analyzed daily in each city not only from players, team and NHL personnel, but from restaurant and hotel workers supporting the post-season tournament in each hub.

Prior to the NHL’s restart this summer, deputy commissioner Bill Daly estimated between 25,000 and 30,000 tests will be administered through the end of the Stanley Cup final.

Aware that even a perceived conflict with public testing could sour each city’s population on hosting a dozen NHL teams, the league and labs insist there isn’t one.

The chief executive officer of DynaLife in Edmonton says the lab sources chemicals and machinery from manufacturers that don’t supply Alberta Health Services.

“A very simple analogy would be public health has chosen to run a fleet of Chevrolets and Fords as their vehicles,” Jason Pincock told The Canadian Press.

“We looked at that and said, ‘OK, we want to make sure that they’re going to have all the parts and tools for all the Chevys and Fords that they need. So we’re going to buy the Hondas, and we’re going to run Hondas for the NHL.’ They’re all still cars.”

The NHL’s chief medical officer indicated both labs gets their tests and technology from non-public suppliers.

“The way we’re doing the testing is using different staffing, different reagents and a different testing platform or machinery than is being used for the public testing,” Dr. Willem Meeuwisse said when the NHL announced details on resuming the 2019-20 season.

DynaLife set up a dedicated COVID-19 testing lab for the NHL in its downtown Edmonton location a few blocks south of Rogers Place and the two team hotels.

“It’s testing we weren’t doing before,” Pincock said. “We’ve never had a role in doing the public’s COVID testing.

“But we do a ton of routine health care testing for the public. That is our primary job.”

We wouldn’t have taken it on if we couldn’t.– Chris Carson

LifeLabs performs COVID-19 testing for both public and commercial clients, which now includes the NHL.

Senior vice-president Chris Carson states the company can handle both.

“We wouldn’t have taken it on if we couldn’t,” he said. “We have been very conscious of ensuring we are there for the support of the public health network. It is our first priority.

“We do track these capacities separately and we go to significant lengths to make sure we are supporting the public health network, and as the NHL has indicated, ensuring that we are not drawing against that to support our commercial relationships like the one we have with the NHL.”

Both Pincock and Carson say their labs hired additional staff — 70 in the case of Edmonton — to fulfil the NHL’s testing needs.

The league’s demand for tests will decrease as teams are eliminated from the post-season and depart hub cities. It should dwindle to zero in Toronto in September.

Alberta’s reward for high testing capacity and low rate of infection relative to other NHL markets was the league choosing the provincial capital to complete the playoffs.

The tentative start date for the conference finals is Sept. 8 followed by the Stanley Cup at Rogers Place.

The NHL said Monday no players or staff have tested positive for the virus since the 24 teams entered the secure zones in Toronto and Edmonton on July 26.

Alberta’s government has encouraged everyone, even the asymptomatic, to get tested. Public Health Ontario isn’t currently recommending routine tests for asymptomatic people.

Slowdowns or hiccups in public testing risk a scenario in which Albertans wonder why healthy young men are tested at a faster rate than them.

“Just the mere optics of tests in the public system taking longer than tests for NHL players can be problematic,” said Dr. Lorian Hardcastle, an associate law professor at the University of Calgary who specializes in health law and policy.

An NHL team receiving preferential or additional servicing from the health-care system has been a flashpoint in Alberta before.

Calgary Flames players and their families receiving H1N1 flu vaccines in 2009 at a private clinic, the day before the province declared a shortage, resulting in an inquiry and the firing of a nurse and her supervisor.

Alberta has the capacity to perform 16,000 daily tests and the highest single-day demand so far was 11,501 on July 31, Alberta Health communications assistant director Tom McMillan told The Canadian Press in an email.

“Alberta has had the most open testing approach in Canada and not yet approached our maximum capacity on any given day,” he wrote.

“More important than simple capacity is ensuring that testing is available when it’s needed for those who need it most.”

— With files from The Associated Press