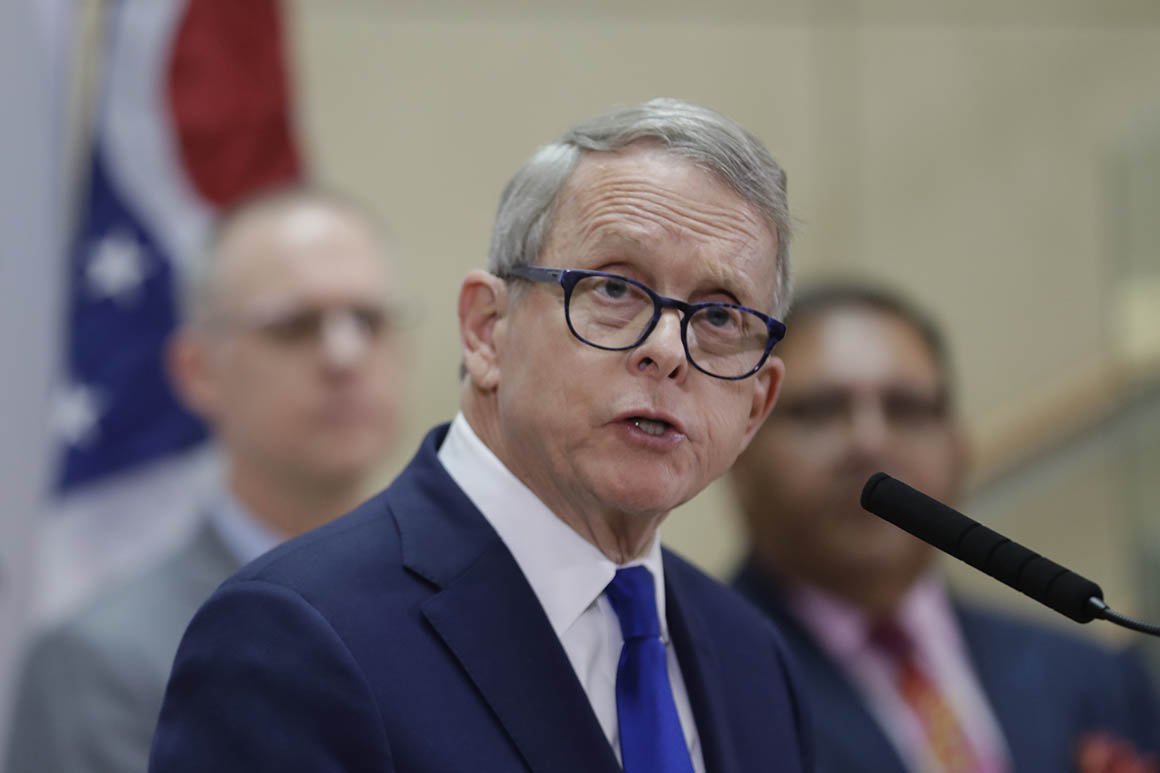 Gov. Mike DeWine of Ohio has tested positive for coronavirus, hours before President Donald Trump was set to touch down in the state and meet with him.

DeWine said in a virtual news conference on Thursday evening that he felt “fine” aside from a headache and called the diagnosis a “big surprise,” given the extensive measures he and his wife had taken to avoid catching the virus.

According to a statement from DeWine’s office, the Republican governor’s diagnosis was discovered “as part of the standard protocol to greet” the president on the tarmac when he arrived in Cleveland to deliver a speech, tour a manufacturing facility and hold a fundraiser.

The statement revealed that DeWine, whose response to the pandemic had been widely praised, was asymptomatic but would return to Columbus, Ohio, where he will be tested again, and then quarantine at his home in Cedarville, Ohio, for the next two weeks.

DeWine is the second governor known to have contracted Covid-19, the illness caused by the novel coronavirus, following the diagnosis of Gov. Kevin Stitt of Oklahoma last month.

Lt. Gov. Jon Husted, who was also tested according to the protocol for meeting with Trump, tested negative, DeWine’s office said.

DeWine is the second person in just over a week to test positive for the virus before meeting with Trump. Last Wednesday, Rep. Louie Gohmert (R-Texas) was revealed to have coronavirus before he was set to travel to his home state with the president on Air Force One. Gohmert’s case was also caught by the White House screening process, as the congressman said he was asymptomatic.

Trump addressed DeWine’s absence in a brief speech to supporters on the tarmac in Cleveland.

“Our great governor, governor of Ohio DeWine, just tested positive — just here — and we wanted to wish him the best. He’ll be fine,” Trump said. “I just said, ‘I look forward to seeing the governor.’ They said, ‘Sir, he just tested positive.’ But he’s a great guy, he’s done a fantastic job.”

DeWine’s decision to greet Trump on Thursday was itself a reversal — the governor did not meet with Vice President Mike Pence in June when Pence visited Ohio for the reopening of a General Motors plant in Lordstown, despite initially being scheduled to join him. DeWine said “quite candidly” at the time that he and his wife had sought to avoid crowds during the pandemic. He said Thursday that he wasn’t sure where he had possibly contracted the virus, and that members of his “bubble,” such as his security detail and wife, were also being tested.

The state has seen a new spike in cases since then, and hit a record number of daily new infections a week ago, though that number has started to come down.

The governor said in his news conference that he hoped critics of wearing face coverings wouldn’t take the “wrong lesson” from his diagnosis, explaining that much of responding to the pandemic is “simply trying to improve your odds,” noting that Ohioans shouldn’t “read a whole lot into this.”

DeWine has earned plaudits as one of a handful of Republican governors to have instituted aggressive coronavirus restrictions, and he has pressed the Trump administration to ramp up testing and for more personal protective equipment.

A Quinnipiac University poll in June showed DeWine’s approval rating at an all-time high, with more than three-quarters of voters approving of his handling of the virus.

In June, the governor agreed to receive a coronavirus test during a news briefing in order to show that tests were available to those who wanted one. Early last month, one of DeWine’s staffers tested positive in what was thought to be the first case in his office.

Just Wednesday, the governor issued a face mask requirement for children returning to school in the fall. And after initially declining to issue a statewide mask mandate, a step some other governors and the president have adamantly resisted taking, DeWine last month joined more than half of U.S. states in announcing a mask requirement.

Earlier this week Ohio became one of a half-dozen states to team up to jointly purchase 3 million rapid antigen tests in an effort to expand and speed up testing.

In an interview with CNN’s Chris Cuomo on Wednesday night, DeWine repeatedly declined to criticize the Trump administration’s response to the crisis and its inability to provide the testing capacity that health experts say is necessary for tracking the spread of coronavirus and scuttle major outbreaks before they get out of hand.

DeWine said on Thursday he didn’t see the virus hindering his work.

“So far my work is not going to be impacted,” he said, though he added that he was “not taking anything for granted,” noting that the virus “is a nasty thing.”