Opinion | The NRA Might Be Weakened. Gun Rights Voters Are Not. 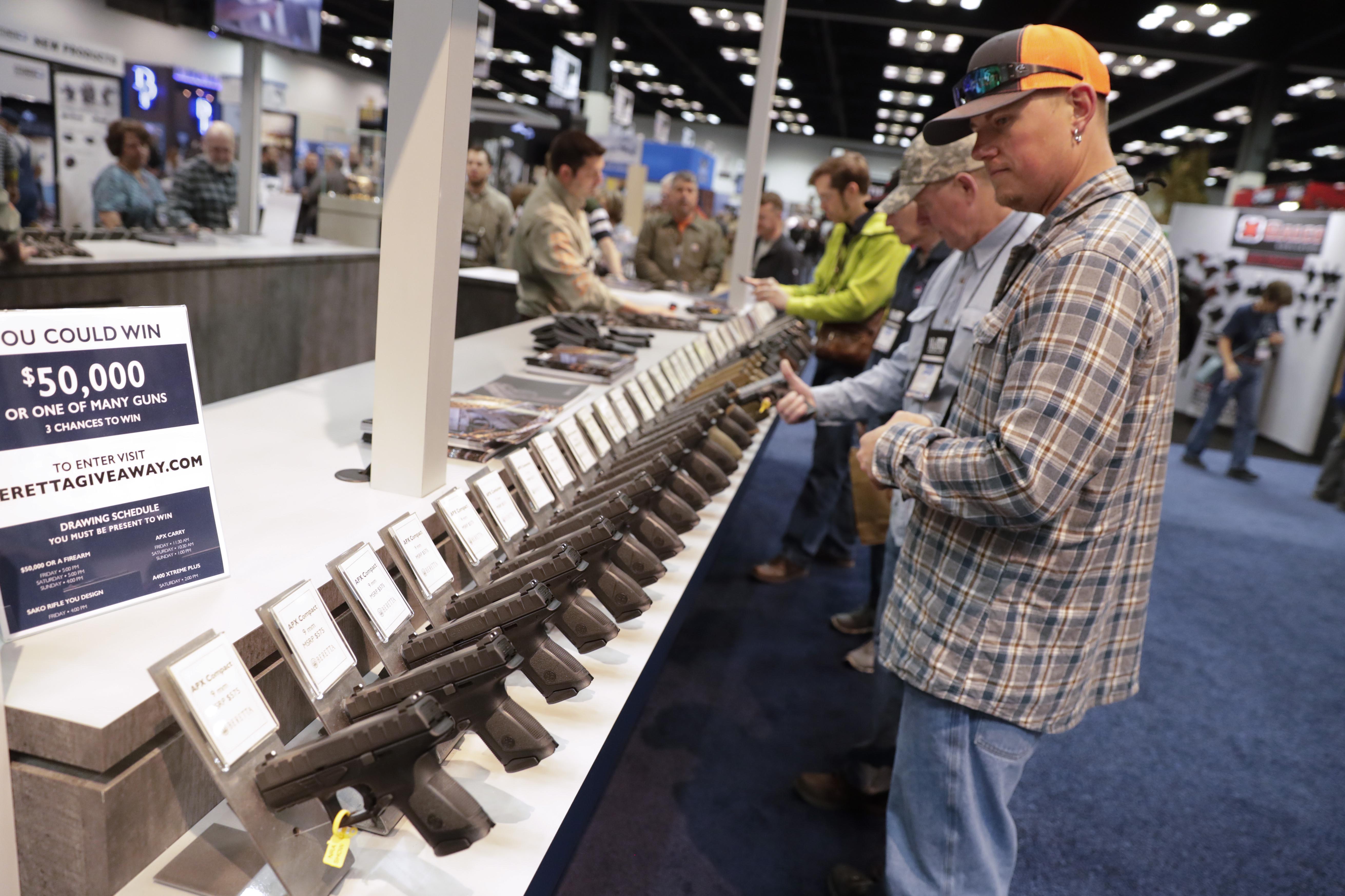 Bill Scher is a contributing editor to Politico Magazine and co-host of the Bloggingheads.tv show “The DMZ.”

Democrats rejoiced at the news that the New York Attorney General is aiming to dissolve the National Rifle Association. Mondaire Jones, the progressive rising star expected to win New York’s 17th Congressional District seat, Thursday summed up the prevailing Democratic view: “Dissolving the NRA would remove one of the biggest impediments to gun safety measures at the state and federal level.”

But that’s a dangerous assumption for Democrats to make. Even if the NRA is gone or tied down by litigation, about 43 percent of Americans will still live in gun-owning households. A fervent gun rights culture of hunters, collectors, open carriers, militia members and self-defense enthusiasts would still persist. Conservative media outlets would still cater to their fears. Other competing gun rights groups such as Gun Owners of America, National Association for Gun Rights and the Second Amendment Foundation would still channel the views of the gun rights grassroots to elected officials and new organizations could crop up to do the same.

Besides, the new lawsuit probably won’t kill off the NRA in six months’ time. And while it had already been suffering from internal strife, weak fundraising and staff layoffs, the easiest way for the NRA to rekindle its fundraising is to start 2021 with a Democratic president, Democratic Senate and Democratic gun control legislation.

And don’t be surprised if a Democratic presidential victory will spark a spike in gun sales, which is what happened in 2008 when Barack Obama won. Already this spring and summer, we’ve experienced the biggest gun sale surge in 10 years, in panicked reaction to the pandemic and the racial justice protests. Such frenzied buying is a reminder to politicians that the gun owner constituency remains present, intense and engaged.

Democrats have a tendency to rationalize why we can’t have nice things by villain-izing individuals and organizations. We can’t solve the climate crisis because of the Kochs. We can’t fix the economy because of Wall Street. And we can’t control guns because of the NRA. Such narratives have elements of truth but miss the bigger picture: To enact legislation in a republic, you need a broad coalition of support. Successful coalitions usually require some degree of bipartisanship to contain inevitable opposition from large groups of voters, not just small cabals of elites.

The political conundrum over gun control Democrats have long faced is that their proposals poll well yet face vehement and debilitating minority opposition. Since a dedicated gun rights voter is more likely to punish a politician than an intermittently engaged gun control supporter (whose interest in the subject often fades between public mass shootings), many politicians are not reassured by consistently pro-reform polling data and shy away from taking a tough vote.

The NRA has long nurtured a gun culture that contributes to our political polarization. Fifty years ago, the historian Richard Hofstadter explored “America as a Gun Culture,” which noted the “extraordinarily efficient lobby of the National Rifle Association.” But Hofstadter also recognized the NRA was exploiting a gun culture with roots that reach all the way to our founding: “The popular possession of the gun was a central point in a political doctrine that became all but sacrosanct in the Revolution. … The American answer to civic and military decadence, real or imagined, was the armed yeoman.” You could erase the NRA today and that gun culture would remain, for someone else to exploit.

Might things change after a 2020 blue wave? Might Democratic success in the right-leaning suburbs and lingering revulsion from mass shootings in Parkland and Las Vegas, compounded by a weakened NRA, alter the political calculus? There is some evidence of this. For example, in 2018, Lucy McBath, a mother of a gun violence victim largely known for her subsequent gun control activism, won a House seat representing suburban Atlanta long held by Republicans.

But in that same election, Republican Brian Kemp won Georgia’s gubernatorial race after running an ad in which he proves his commitment to the Second Amendment by pointing a gun at a nervous teenage boy courting his daughter. If Democrats take back the Senate this year, it will likely be thanks to voters in gun-friendly states like Georgia, and those new senators won’t suddenly become insulated from America’s cultural divide.

Gun control advocates may be particularly excited about the prospects for the Democratic challenger in this year’s Arizona senate race, Mark Kelly. He is the husband of former House member and gun violence victim Gabby Giffords. Together they founded a gun violence prevention group, which is now named after her.

However, Kelly is not running hard on gun control. Not one of Kelly’s TV ads even mentions guns. And when discussing his views on his campaign website, Kelly is careful with his language. He is quick to note that he is a “gun owner and a combat veteran.” And he sticks with measures and phrases that poll strongly such as, “universal background checks” and keeping “guns out of the hands of stalkers and domestic abusers.” He does not use the word “ban,” not even for semi-automatic assault weapons, even though such a ban is a focal point for many gun control advocates.

Other promising Democratic candidates tread even lighter than Kelly on guns. Montana’s Steve Bullock, Maine’s Sara Gideon, Kansas’ Barbara Bollier and South Carolina’s Jaime Harrison don’t even include a gun section in their platforms. Iowa’s Theresa Greenfield, North Carolina’s Cal Cunningham and Kentucky’s Amy McGrath are in line with Kelly and steer clear of mentioning an assault weapons ban on their websites, though Cunningham does explicitly back a ban on high-capacity magazines.

The relatively daring Democratic Senate candidates who specify support for an assault weapons ban on their websites are Colorado’s John Hickenlooper, Georgia’s Jon Ossoff and Texas’ MJ Hegar. Nevertheless, none of them are highlighting their gun control views in TV ads.

A lack of emphasis on gun control by Obama and his fellow Democrats in 2012 hamstrung their efforts to pass a compromise background check measure in the wake of the Sandy Hook massacre that occurred one month after Election Day. Without evidence from the election that gun control was a political winner, the horrific murder of school children and teachers wasn’t enough to compel Congress to act.

At the time, some on the left complained that Obama did not demand enough, and didn’t push harder for restoring the now-expired assault weapons ban. But Obama reasonably concluded that he had to limit his ambitious to what could get 60 votes in the Senate, if he was to have any chance of getting it through the Republican-led House.

Only one promising piece of bipartisan legislation was on the table: the expanded background check bill forged by West Virginia Democrat Joe Manchin and Pennsylvania Republican Pat Toomey. But Toomey proved unable to bring along more than three other Republicans. And Manchin’s rural bona fides weren’t enough to keep the entire Democratic caucus unified. So the bill ended up three votes short.

In the 2020 presidential primary Joe Biden, referring to his role in passing the 1993 Brady Bill and the now-expired 1994 assault weapons ban, bragged, “I’m the only one on this stage who has taken on the NRA and beat them, and beat them twice.” What was different back then? Bill Clinton won the presidency with a bigger mandate to act on gun control, and there was significant bipartisan compromise to turn that mandate into law.

Clinton explicitly backed both measures in the second 1992 presidential debate, which with nearly 70 million viewers was the second-most watched presidential debate in history at that point. Then in 1993, to get the Brady Bill passed, backers had to swallow an NRA-backed bipartisan amendment that weakened the bill’s background check system. (Biden didn’t exactly “beat” the NRA on that one but compromised with it.)

The NRA’s fingerprints were not on the 1994 assault weapons ban. But that, too, was the product of a hard-fought bipartisan compromise, as it was part of the controversial 1994 crime bill. The overall legislation was a mix of liberal crime prevention programs, conservative punitive measures and money for police departments. Wide support from police organizations helped to marginalize the NRA’s influence.

Some on the left will argue that 2021 isn’t 1993. Today’s Republican Party is less reasonable, and tomorrow’s Democratic Party majority need not constrain itself to whatever Pat Toomey thinks is reasonable. And unlike in 2013, Democrats could eliminate the filibuster, pass a bigger package in the Senate on a narrow party line vote, and get it rubber-stamped by a Democratic House.

But in recent days, Senators Manchin, Kyrsten Sinema, Jon Tester and Dianne Feinstein have reiterated their opposition to eliminating the legislative filibuster. And any incoming Democrats from red and purple states, several of whom are running as independent-minded, bipartisan problem-solvers, will not be inclined to take one of the most partisan acts imaginable in their first year in office.

Why the resistance? Probably so they aren’t forced to take up-and-down votes on culturally polarizing legislation like an ambitious gun control package.

Gun control proponents may not want to wait online to buy tickets to Manchin-Toomey: The Sequel. But Toomey may be quite eager for a second chance at a big bipartisan win. Pennsylvania is looking awfully blue, and Toomey is up for reelection in 2022.

Skeptics of compromise are correct that Manchin-Toomey proved that bipartisan support from a swing state Republican and a red state Democrat is not sufficient for gun violence prevention legislation to succeed. However, those remain necessary ingredients for any such legislation to overcome not just the NRA, but the cultural polarization that will fuel attacks on any compromise bill with or without the NRA. The best way to overcome that polarization is not through partisan procedural maneuvering, but with electoral success—flipping red states while explicitly running on gun control.

If the Democratic slate of Senate candidates isn’t prepared to do that, then the burden falls on Joe Biden.

Of course, Biden may have good reason not to either. Gun control is hardly the only pressing issue the next administration is going to face. There’s an economic crisis, and climate crisis. There is pent-up demand among immigrant advocates for creating a path to citizenship for the 11 million undocumented. There is renewed demand for police reform. There is persistent demand for expanding health insurance and lowering health care costs. All of these areas will require significant investments of political capital. Biden would be perfectly rational in concluding that running hard on gun control is not worth the risk.

Yet Biden is both a longtime gun control advocate and a consummate retail politician. If anyone can craft a set of compromise policies and related messages that can satisfy swing voters, contain gun rights opposition and prove red states can be flipped while actively supporting specific gun safety measures—be it universal background checks or bans on certain weapons—it’s Joe Biden.

In making that political calculation, Biden should not presume the NRA’s weakened state makes gun control legislation any easier to pass. If he wants to prioritize gun control in 2021, he will need to prioritize it in 2020, take the political risk and earn a real mandate. America’s cultural divide on guns remains. Only a savvy and skilled politician can cross it.