Panthers stave off elimination with 1st playoff win in 4 years 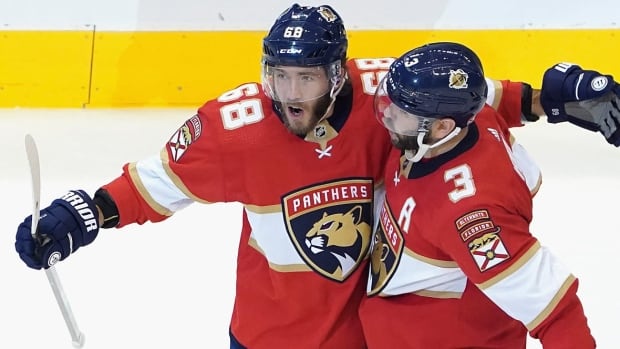 Mike Hoffman and Brian Boyle scored 2:07 apart in the opening minutes of the third period, and the Florida Panthers avoided elimination with a 3-2 win over the New York Islanders in Game 3 of their preliminary round playoff series on Wednesday.

Jean-Gabriel Pageau and Brock Nelson, with 1:27 remaining, scored for the Islanders, the East’s seventh seed. Semyon Varlamov stopped 19 shots and made a costly error leading to Hoffman’s go-ahead goal 41 seconds into the third period.

With Varlamov penalized for playing the puck inside the trapezoid 7 seconds into the frame, Panthers defenceman Keith Yandle faked a shot in the high slot, before feeding Hoffman, who blasted the puck in from the right circle.

Boyle made it 3-1 when he corralled a loose puck inside the Islanders zone and snapped a 40-footer inside the left post.

The Panthers turned the tables on the Islanders by being the more disciplined team a day following a 4-2 loss, in which New York converted two of seven power-play opportunities.

Florida converted two of five power-play opportunities, and its penalty-killers finished 3-for-3, and snapped an 0-4-2 skid — including regular season — against the Islanders, which dated to a 4-2 win on Nov. 10, 2018.

The New York Islanders take a commanding 2-0 series lead over the Florida Panthers thanks to a 4-2 win. 1:05

The Panthers are seeking to become just the second team to overcome a 2-0 series deficit in a best-of-five, and first since the Islanders did so over Washington in 1985. Otherwise, teams are 56-1 when winning the first two games of the NHL’s best-of-five series overall.

Florida is also seeking to avoid going one-and-done for their fifth consecutive playoff appearance, and being eliminated by the Islanders for the second straight post-season after losing a first-round series in six games to New York in 2016.

Florida has not won a playoff series since its first post-season appearance in 1996, when the team reached the Stanley Cup final, where it was swept by Colorado.

The Panthers scored first for the second straight game, with Haula’s power-play goal 4:02 into the second period. Varlamov gave up a big rebound after stopping Hoffman’s shot from the right circle, and Evgenii Dadonov shovelled the puck through the crease to an open Haula, who fired it into the open left side.

It was Haula’s first goal with Florida since being acquired in a trade with Carolina in February.

The Islanders responded with Pageau scoring with 3:34 left in the second period.

Anthony Beauvillier out-raced Panthers defenceman Anton Stralman to a dump-in at the left boards and fed Pageau, who snapped a shot in from the right circle.

NOTES: The game was Panthers first as the “home” team since 4-1 win against Montreal at Florida on March 7. … The Islanders made no lineup changes from Game 2, while Panthers defenceman Mike Matheson was scratched after picking up four of Florida’s 10 minor penalties this series.