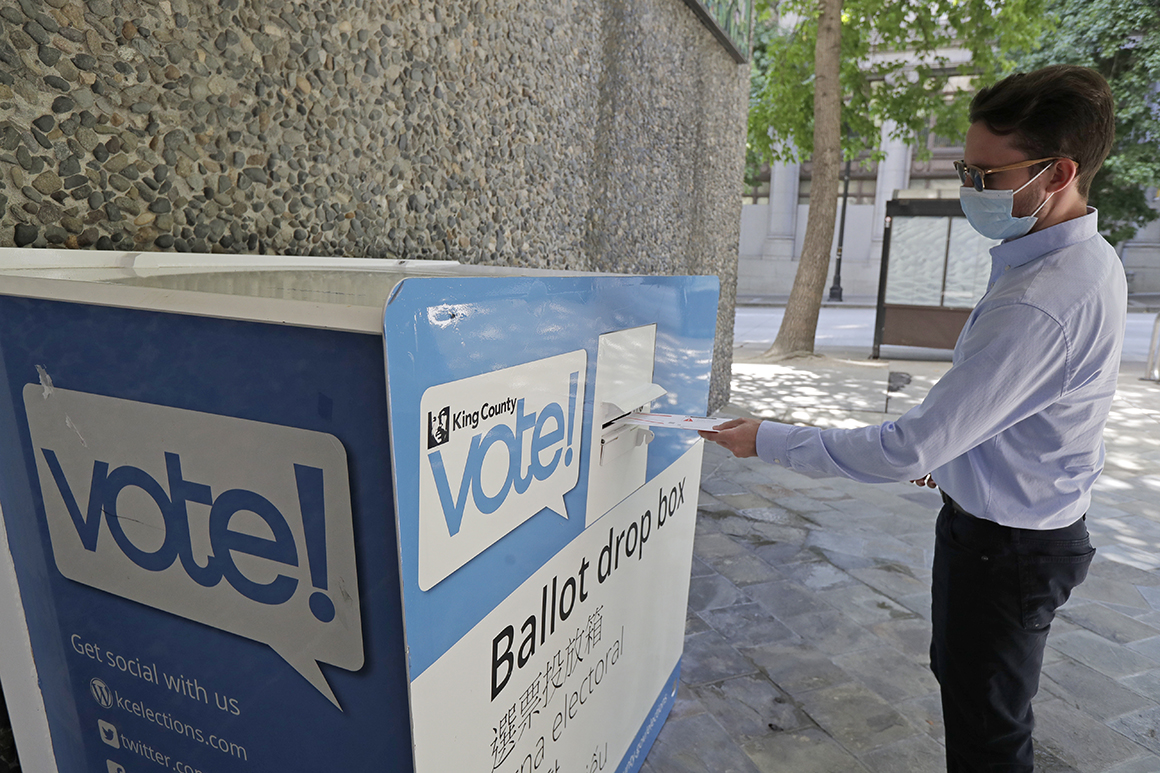 Thirty-one percent of total respondents said the U.S. “should not allow all voters to vote by mail in elections this year because it jeopardizes election security,” echoing the president’s arguments. | Ted S. Warren/AP Photo

Most voters approve of voting by mail ahead of a presidential election plagued by coronavirus concerns, and an overwhelming majority agree the contest should proceed as scheduled on Nov. 3, according to the latest POLITICO/Morning Consult poll.

The survey, released Wednesday, shows 58 percent of respondents saying the U.S. “should allow all voters to vote by mail in elections this year” to help slow the spread of the highly contagious disease, which public health experts warn could endanger physical polling places.

There is a substantial partisan split within those results, driven by President Donald Trump’s frequent attacks on mail voting. Among Democrats, 81 percent favored allowing everyone to vote by mail, and 57 percent of independents did too. Just 33 percent of Republicans agreed.

Thirty-one percent of total respondents said the U.S. “should not allow all voters to vote by mail in elections this year because it jeopardizes election security,” echoing Trump’s arguments. That view was strongest among Republicans (57 percent) and tailed off among independents (27 percent) and Democrats (10 percent).

In recent months, Trump has repeatedly claimed without evidence that efforts by states to expand mail-in voting would result in widespread voter fraud — even suggesting last week that the election should be delayed “until people can properly, securely and safely vote.”

Wednesday’s survey, however, shows significant opposition to the president’s proposal, even if voters remain divided on the subject of in-person versus mail-in voting.

Just 7 percent of respondents said the election “should be postponed until Americans can vote in-person at their polling place when the coronavirus pandemic is no longer a public health emergency.”

Voters have no clear personal preference between in-person and mail-in voting, with 48 percent favoring mail ballots and 46 favoring voting in physical polling places if social distancing orders are still in place in their communities come Election Day. More than two-thirds of Republicans preferred the in-person option, while just under two-thirds of Democrats said they’d prefer to vote by mail.

But despite voters’ insistence that the election should be held as scheduled, the survey shows that Americans are broadly uneasy about voting amid the coronavirus pandemic.

A recent study found that voting by mail does not benefit one party over another, and cases of election fraud in the U.S. are exceedingly rare. Experts acknowledge there are some slightly higher fraud risks associated with mail-in ballots, but only when proper security measures are not put in place.

The POLITICO/Morning Consult poll was conducted July 31-Aug. 2, surveying 1,991 registered voters with a margin of sampling error of plus or minus 2 percentage points.