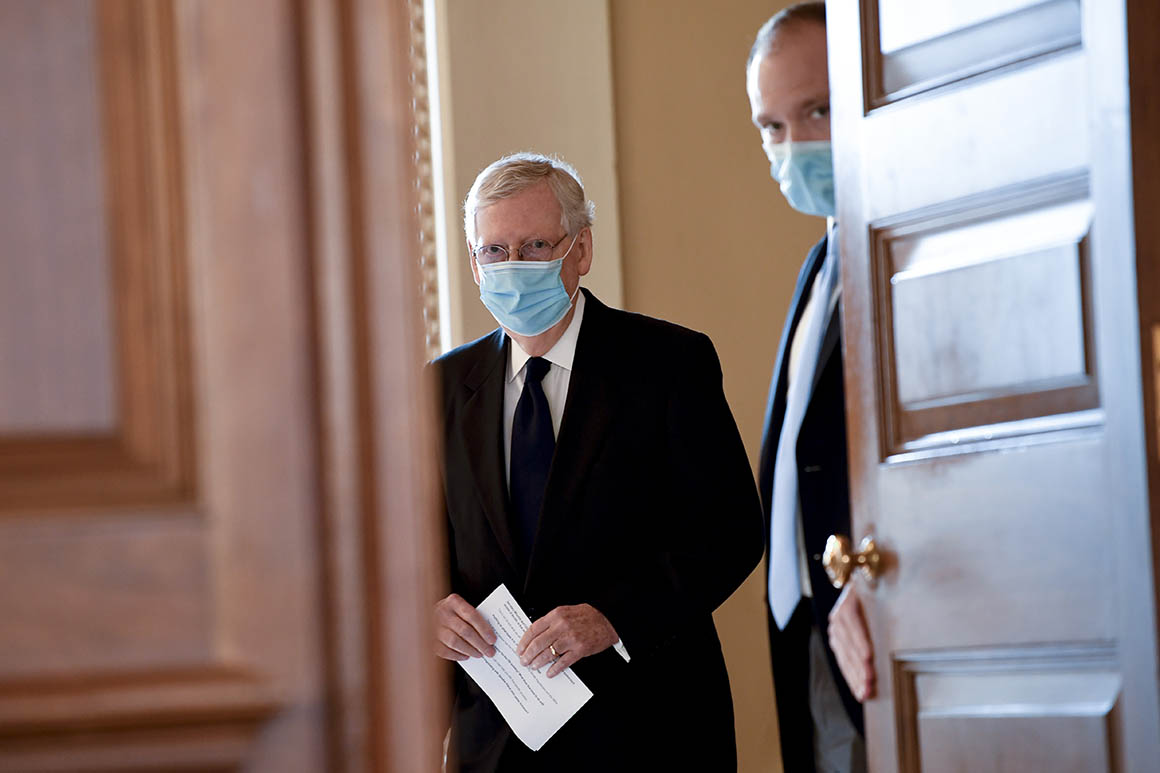 With negotiations over a new coronavirus relief package stalled, Senate GOP leaders and the White House are searching for ways to ramp up the pressure on Democrats after federal unemployment benefits lapsed for millions of Americans.

Senate Majority Leader Mitch McConnell plans to force votes this week on renewing expired federal unemployment payments and other policy issues in a bid to shake up talks between the White House and Democratic leaders that have essentially ground to a halt. The two sides are clashing over unemployment insurance, with Democrats seeking to extend a $600-per-week federal benefit into 2021, while Republicans want to dramatically scale back the payment.

Democrats are also demanding hundreds of billions of dollars in new aid to state and local governments to prevent a wave of employee layoffs, which Republicans have rejected.

White House and Republican leaders on the Hill are desperately searching for some way to change the political dynamic surrounding the negotiations. With the pandemic spiking in many states, Trump trailing Democratic challenger Joe Biden in the polls, and Senate Democrats in reach of taking back control of the Senate, Republicans say they need to shift the debate somehow.

White House officials have also floated for days that President Donald Trump could take executive action to address some of the economic damage from the coronavirus pandemic. This could involve orders to delay the collection of federal payroll taxes or extend a moratorium on student loan payment, among other options. White House officials and some Trump allies have called for Trump to suspend payment of the federal payroll tax, although it’s unclear if the president has the authority to do that. Trump pushed for a payroll tax cut as part of the Senate GOP’s relief package, but the idea was rejected by Republican leaders.

Democrats point out McConnell has so far been AWOL from the talks, leaving Treasury Secretary Steven Mnuchin and White House chief of staff Mark Meadows in charge of the negotiations. Similar pressure tactics also failed to move Democrats during debate over the Cares Act in the spring. And Democrats note that any Trump action on payroll taxes could face a legal challenge.

“We’re set up to have a vote, but I’d rather get an outcome than have a vote,” McConnell said on “Full Court Press with Greta Van Susteren” in an interview that aired on Sunday. “What we wanted to make sure the American people understood by setting up this vote…[is] that Senate Republicans wanted to act, we wanted to break the logjam we wanted to deal with the immediate problem of unemployment insurance.”

The stalemate comes as Speaker Nancy Pelosi (D-Calif.) and Senate Minority Leader Chuck Schumer (D-N.Y.) will meet with Mnuchin and Meadows again on Monday, the sixth such session since negotiations began. The two sides said they had a “productive discussion” during a three-hour meeting on Saturday, yet they have little or no progress to show for all the closed-door huddling in Pelosi’s office.

“Right now today we have an emergency. A building is on fire and they’re deciding how much water they want to have in the bucket,” Pelosi said Monday on CNN. “They’re so fussy about any anecdotal information they may have about somebody not going to work because they make $600 on this, but so cavalier about big money to companies that really shouldn’t be having it, so the $600 is very important in the lives of the American people.”

McConnell will announce votes this week on proposals to extend federal unemployment benefits as a lower level than the $600-per-week payment that ended July 31, likely including a proposal from Sen. Ron Johnson (R-Wis.) that would renew enhanced unemployment at 66 percent of lost wages, or $200 per week. Democrats rejected both Johnson’s bill and a proposal by Sen. Martha McSally (R-Ariz.) to extend the $600 payment for one week, saying they refuse to negotiate in a “piecemeal” process.

Meadows floated several options for a longer extension of the $600 payment as part of a so-called “skinny” plan last week, only to have Pelosi and Schumer say no.

GOP aides said additional votes on other Republican initiatives will happen as well. McConnell will use a “shell bill” approved Thursday by the Senate as the vehicle for the policy votes.

Senate Republicans and committee aides complain that Schumer is blocking any discussions between rank-and-file senators at the committee level. And a “staff meeting” on Sunday between the two sides only included aides to Meadows and Mnuchin, not any Senate Republican staffers.

“Leader Schumer clearly does not want his caucus negotiating with Republicans like they did with the Cares Act,’ said a Senate GOP aide. “By shutting out his own members, he’s stifling the bipartisanship that made the Cares process so successful. He’s allowing election-year politics to dominate and it’s hurting any progress on a deal.”

But Democrats argue that without an established negotiating framework, talks between members are pointless. And they say negotiations are different this time around given that the House already passed in May the nearly $3.5 trillion Heroes Act, which Democrats are using as their starting point.

“Democrats are eager to begin committee-level talks, but the Senate Republicans are still in such disarray so it’s unclear what their position is,” said a Senate Democratic leadership aide. “Furthermore, they haven’t been authorized to negotiate by the White House. Once a framework is agreed to by the White House and Democrats, the committees in both the House and Senate will work on the details. “

The Senate is scheduled to leave for August recess at the end of the week, but that could be delayed if neither side is able to reach some type of deal.