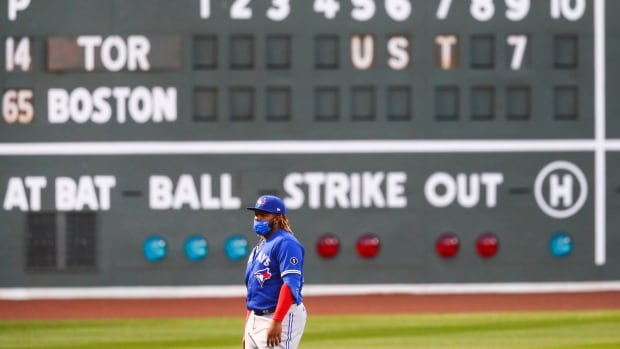 Mitch Moreland’s crack of the bat in a nearly empty Fenway Park was easily heard. Alex Verdugo’s yell after his homer-saving catch might have been even louder.

Verdugo hit two solo homers over the Green Monster and made a homer-robbing grab, Mitch Moreland hit a two-run shot and Boston’s beleaguered staff rebounded to lift the Red Sox past the Toronto Blue Jays 5-3 on Friday night.

Verdugo snagged Travis Shaw’s bid with his leaping grab in the ninth inning, pulling the ball back before it landed in Toronto’s bullpen, and Moreland added a bases-loaded walk to help Boston win its second straight following a four-game losing streak.

“I would say I’ve never screamed like that before,” Verdugo said, smiling. “I used to be a pitcher back in the day. I was pretty hyped up.”

Cavan Biggio hit a solo homer, and Vladimir Guerrero and Bo Bichette each had an RBI double for Toronto, which has dropped five of six.

Moreland’s homer, coming with the crack echoing around Fenway, sailed just over the 380-foot sign at the edge of the Blue Jays’ bullpen in right off starter Tanner Roark (1-1) in the third inning for his fourth homer.

“I just didn’t have it tonight, basically, is what it is,” Roark said. “Just the hand placement out front of pitches was just a hair off.”

Entering the night with the AL’s second-worst ERA (5.28), Boston used six relievers to hold down the Blue Jays. Reliever Heath Hembree (2-0) got three outs for the victory and Brandon Workman the final three for his third save.

“Pretty good. All of them,” Boston manager Ron Roenicke said. “We’re trying to piece together what order it was going to be in.”

Verdugo had given Boston a 2-1 edge when he hit his first Fenway homer with the Red Sox (he had one with the Los Angeles Dodgers last season), an opposite-field shot that bounced off the second row of seats above the Monster and back onto the field. His other came leading off the eighth.

Biggio, inserted in the leadoff spot, homered on the sixth pitch of the game, a drive that barely cleared the Monster.

Making just his second start and first since July 28, Roark walked four batters in the first, the last was Moreland.

Boston starter Ryan Weber was lifted in the fourth for the third time in as many starts, giving up two runs on five hits.