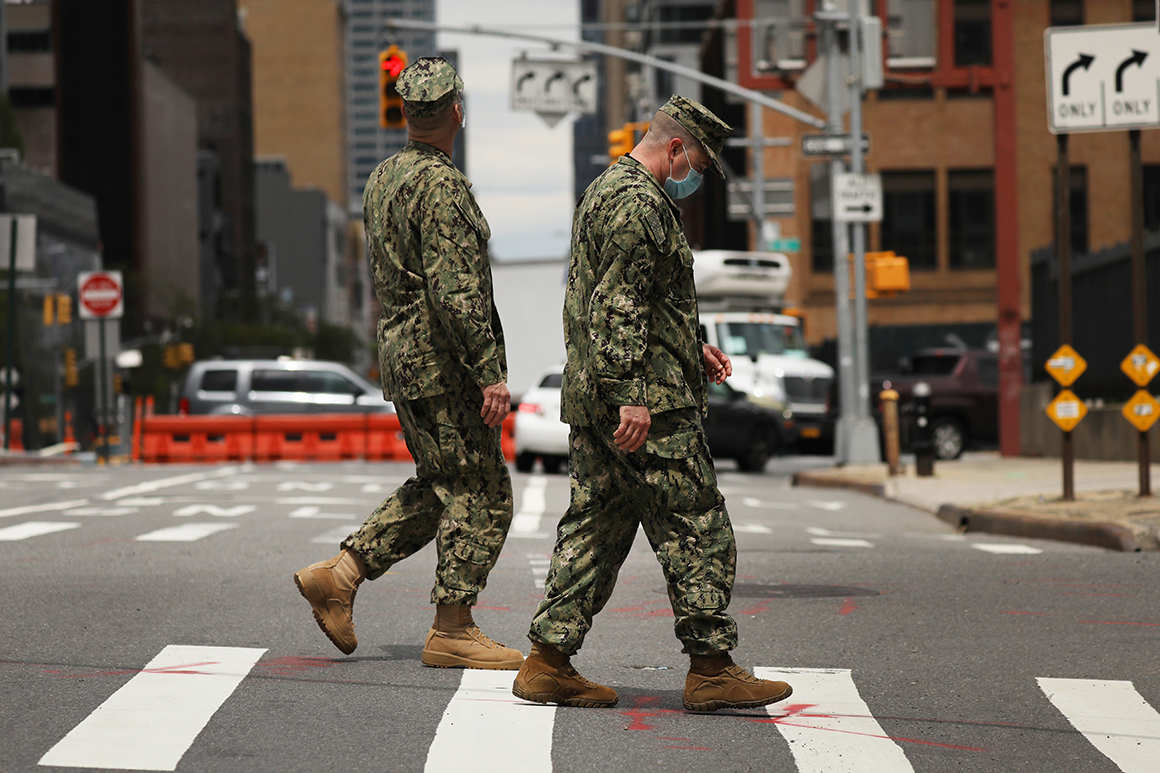 The White House has emphasized that states can use the pandemic relief money they received as part of the CARES Act to cover their share of the National Guard deployment going forward. | Spencer Platt/Getty Images

States are pushing back on the White House’s explanation for singling out Texas and Florida to continue receiving full funding for their National Guard troops’ coronavirus relief effort while all other states are set to have funds cut by 25 percent later this month.

Several governors are requesting calls with the Trump administration to lobby for more money. An administration official, who was not authorized to speak publicly on the issue, told POLITICO that while the president “is willing to speak with any governor from any state to hear their concerns,” Texas and Florida were the only two states that made the case for full funding “directly to the president.”

The National Governors Association disputed that justification, saying that many governors held calls with President Donald Trump, Vice President Mike Pence and other top officials over the past few months in which they advocated for full federal funding. But it appears that “Texas and Florida were more persuasive,” said an NGA staffer, who asked to remain anonymous to speak freely.

Washington Gov. Jay Inslee, a Democrat, is among a growing group of governors in both parties speaking out against the looming funding cut and saying they will lobby the administration to reconsider.

“Nearly every governor made an appeal for full federal support,” his federal liaison Casey Katims told POLITICO. “We had phone calls directly with the White House and [Pence] to emphasize the essential role of the National Guard to our pandemic response. A president should never pick which American lives are worth protecting based on personal relationships or political interests.”

Texas and Florida, two hotly contested states in this year’s election, both have governors who have enjoyed a close relationship with Trump — prompting accusations from Democratic governors and lawmakers that the funding decision was meant to shore up the president’s political standing ahead of November. Though the two states continue to be among the country’s biggest virus hot spots, they are not the worst off by several metrics.

Inslee’s office confirmed that the governor requested a call with the White House on Thursday “to communicate our state’s significant need for continued full funding.” Gov. Jim Justice (R-W.Va.) on Wednesday pledged to communicate “emphatically” to Defense Secretary Mark Esper that he disagrees with the move, which was announced on Monday.

“For crying out loud, our nation needs to stand steadfast with our Guard,” he said.

At height of the pandemic, West Virginia had about 700 troops deployed to testing sites, food banks and public health departments. Though that number has dropped to around 400, the state estimates that it will need over $7 million to take on a quarter of the cost through the end of the year.

“If we’ve got to find 25 percent of the dollars, we’ll find it,” Justice, a Republican, said. “But I would also say that I’m not supportive of that.”

In Wisconsin, where Democratic Gov. Tony Evers says the Guard is needed both to continue its pandemic relief role and fill in for poll workers in upcoming elections. The state estimates it will have to pay about $4 million to cover the loss of federal support.

“That was a disappointment,” he said on Wednesday of the 25 percent cost-shift to the state. “That’s approximately what we would pay if we would have used the state authority” to activate the Guard instead of the federal authority the Guard has been under for much of this year.

The White House has emphasized that states can use the pandemic relief money they received as part of the CARES Act, H.R. 748 (116), to cover their share of the deployment going forward, and noted that Guard members will receive federal benefits until the end of the year.

But a memo FEMA sent to states this week, obtained by POLITICO, says that not only will the agency begin to bill states for 25 percent of the cost of the deployment starting Aug. 22, the agency will also no longer cover Guard troops’ equipment and supplies — though states can try to seek reimbursement through a different program. The memo says this practice is “consistent with traditional National Guard disaster response conducted under [state active duty] status,” even though the mission is a national, federal one.

A group of about three dozen House Democrats wrote to the Trump administration on Wednesday demanding a full explanation for the funding cut and the exemption for Texas and Florida.

“Our states are strapped for cash and the administration continues to play political games with our Guard members in uniform,” said Rep. Cheri Bustos (D-Ill.), the lead author of the letter. “We won’t stand by while Donald Trump is trying to nickle and dime our servicemembers.”