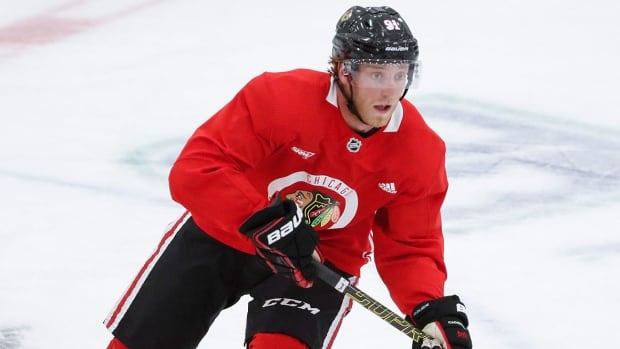 Chicago forward Drake Caggiula was suspended by the NHL on Sunday for Game 2 of the their qualifying round series against the Oilers for an illegal check to the head of Edmonton’s Tyler Ennis.

The hit occurred in the second period of Chicago’s 6-4 Game 1 victory Saturday. Ennis returned after a brief absence and finished the game.

In a video announcing the suspension, the league’s department of player safety said head contact was avoidable on the play. That falls in line with Chicago head coach Jeremy Colliton’s view of the play.

“Just kind of a bang-bang play,” Colliton said. “He went hard, and he was definitely wasn’t trying to catch him in the head. But he did, so the NHL made the decision.”

Chicago forward Drake Caggiula received a 2 game suspension for his hit on Tyler Ennis in game one of Edmonton and Chicago’s playoff series. 1:04

Collton isn’t sure who will replace Caggiula, a former Oilers forward, in the lineup for Game 2 Monday night. Mackenzie Entwistle, Brandon Hagel, Dylan Sikura and John Quenneville are among the possibilities.

“We’ve got a lot of guys here that could step in and hopefully kind of emulate what he does,” Chicago forward Dylan Strome said. “He’s a guy who’s a 200-foot player and hits a lot of bodies and finds a way to get some chances and create some momentum for us. He’s an important player. We have a lot of depth here, so hopefully it doesn’t take too much wind out of our sails.”

‘He’s a great guy to have on your team’

Caggiula skated 11:25 and won one of two faceoffs in Game 1 against his former team. In 40 games during the regular season, the 26-year-old had nine goals and 15 points.

“He’s a great player for us,” Strome said. “He works hard every single shift. He lays the body. He gets it done at both ends of the rink. I think he does whatever it takes. He’s a great playoff player and a great guy to have on your team.”

Caggiula is eligible to return for Game 3 Wednesday.

“I think it’s also kind of established a standard for how they’re going to deal with those types of hits,” Colliton said of the suspension. “As the series goes on, as the other series go on, I’m sure it’s going to get a little more physical. Now, we know.”

The league was not expected to hold a hearing for any other actions from games Saturday, including Calgary’s Matthew Tkachuk injuring Winnipeg’s Mark Scheifele during Game 1 of Jets-Flames. Jets coach Paul Maurice said he’s convinced Tkachuk intentionally directed a skate blade at Scheifele’s left leg to cause injury.

Scheifele is not expected to play in Game 2 Monday and could miss a significant amount of time.