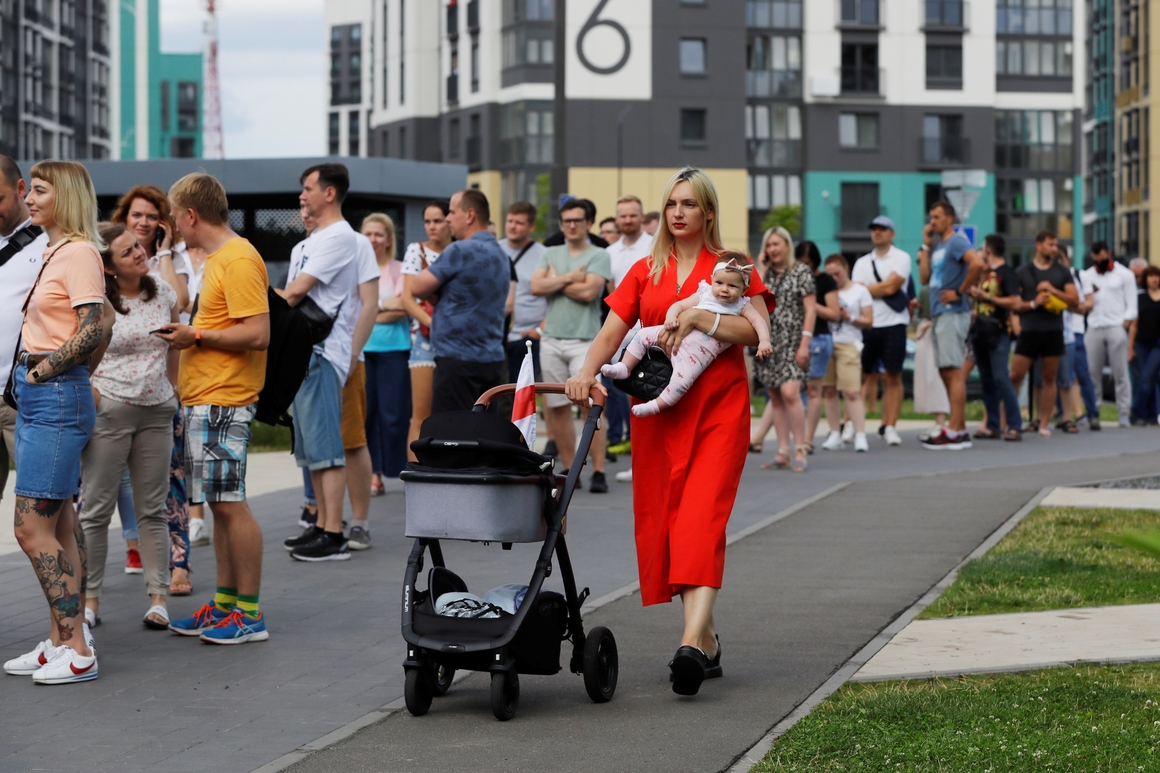 A woman walks with her child as people wait in line to cast their votes in the Belarusian presidential election in Minsk on Aug. 9, 2020 | Sergei Grits/AP Photo

MINSK — Authoritarian incumbent President Aleksander Lukashenko won 79.7 percent of the vote in Belarus’ presidential election, according to an exit poll released immediately after voting ended Sunday evening — in a campaign marked by the arrest and intimidation of opposition candidates.

Tikhanovskaya was a surprise replacement for her husband Sergei, a popular blogger who was arrested when he tried to launch a presidential campaign. She held large rallies in Minsk and in provincial cities, riding a groundswell of popular discontent at Lukashenko, who has been in power since 1994.

The lopsided election result is likely to be contested by the opposition.

Police arrested independent election observers and reporters on Sunday and there were reports of internet outages and difficulty accessing news sites. People also filmed large numbers of troops moving toward the capital; the main roads running into Minsk were blocked on Sunday, and the city was filled with riot police and the military.

In her campaign, Tikhanovskaya had called for a clean vote count, and the opposition warned against early voting — traditionally used for ballot stuffing. Lukashenko has built his regime on a tight alliance with the security forces and government elites, coupled with the use of force to bring potential opponents to heel.

Tikhanovskaya went into hiding on Saturday night, emerging on Sunday to cast her ballot.

Veronika Tsepkalo, one of Tikhanovskya’s campaign allies, fled to Russia ahead of the vote. Her husband, Valery Tsepkalo, a former ambassador to the United States and a potential presidential candidate, was forced to flee to Russia last month. Another ally, Maria Kolesnikova, was briefly detained on Saturday.

A newsletter from POLITICO that unpacks essential global news, trends, and decisions.

During the election campaign, Minsk and other Belarusian cities saw spontaneous protests, with police cracking down on cyclists and horn-blowing drivers.

“I think tomorrow they will calm down and understand that everyone only lives once,” he said.

Ahead of the election, Josep Borrell, the EU’s foreign policy chief, warned of the government’s “unacceptable” restrictions on freedoms of media and assembly, as well as “detentions of peaceful protesters, domestic observers, journalists and activists.”

“The EU appeals to the Belarusian authorities to guarantee the exercise of full political rights of the candidates, to avoid using force against peaceful protesters, to refrain from further detentions of elections observers, peaceful protesters, candidates and members of their teams and immediately release all activists, human rights defenders, bloggers and journalists detained on political grounds,” he said.