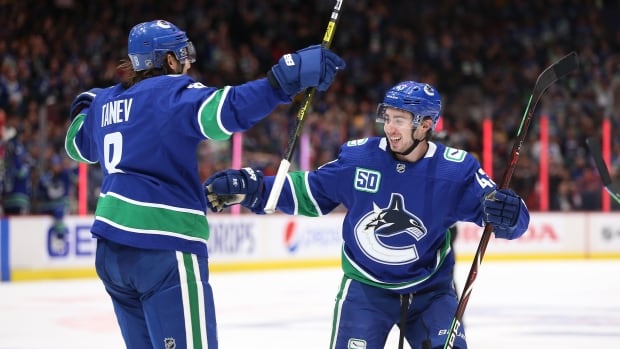 Chris Tanev is the link to the Vancouver Canucks past while Quinn Hughes holds the promise of the future.

Like they do so often on the ice, the two defenceman had each other’s backs while answering questions following the Canucks thrilling 5-4 overtime win against the Minnesota Wild Friday night.

Tanev, the stringy-haired, 10-year veteran was the unlikely hero, scoring just 11 seconds into overtime as Vancouver won the best-of-five NHL Stanley Cup qualifying series 3-1. Hughes, a candidate for rookie of the year who has played like a veteran all series, scored a goal and added an assist.

“It’s awesome,” the 30-year-old Tanev said about the Canucks winning their first post-season series in almost a decade. “We haven’t won much lately. It’s fun to win.”

Chris Tanev struck just 11 seconds into overtime to give the Vancouver Canucks a 5-4 series-clinching win over the Minnesota Wild. 1:14

After playing exceptionally well in his first NHL season, Hughes has been even better in the playoffs. The 20-year-old leads the Canucks with six points.

A smooth skater who thinks the game as well as he plays, Hughes credits Tanev with being the perfect mentor.

“I don’t think you can put a price on it,” said the seventh player taken in the 2017 draft. “I think he does a lot of things in the D zone I’m not capable of doing. As we played longer and longer together my offensive game has continued to get better.

“Chris is the heart and soul of this team. He’s been big for me not only on the ice but off the ice as well.”

Plenty in store for Hughes

Tanev believes the best is yet to come for Hughes.

“He’s impressive,” said the Toronto native who signed with Vancouver as a free agent in 2010 after not being drafted. “He’s going to be the best defenceman in the league if he’s not there next year or the year after.

“The way he skates, the way he moves the puck, he’s a special player. He’s going to be the best player around for a long time. We’re happy he’s on our team.”

Tanev and Hughes are examples of the winning ingredients Vancouver has mixed together. Veterans like captain Bo Horvat, J.T. Miller, Brandon Sutter and Alex Edler have blended with goaltender Jacob Markstrom and Elias Pettersson, last year’s Calder Trophy winner, and Brock Boeser, who are all experiencing their first NHL playoffs.

“This is a group they learn quickly, they learn on the fly,” said head coach Travis Green, who also is making his NHL post-season debut. “Coaching this group is enjoyable. They let you coach them, they listen, they buy in as a group. That’s what you want as a team.”

The Canucks trailed 1-0, 3-1 and 4-3 Friday. Instead of panicking, Vancouver showed resilience and patience. Horvat forced the overtime with 5:46 remaining on an assist from Tanev.

“For us to battle back and win the way we did, I couldn’t be more proud of our guys,” said Horvat, who was a rookie when the Canucks last made the playoffs in 2015. “We have a lot of character guys that step up in big moments.”

With Edmonton, Nashville and Winnipeg all eliminated Vancouver survives the play-in series as the fifth seed in the West. The Canucks now wait until Sunday to learn who they play in the Western Conference quarter-finals.

After looking nervous in losing the opening game 3-0, the Canucks gained poise and confidence as the series progressed. They allowed just three goals on 22 penalty kills but will need to show more discipline as the playoffs continue.

Vancouver lost forward Micheal Ferland, who has a history of concussion problems, early in Game 2 and winger Tyler Toffoli has missed three games with an injury.

At times Markstrom has been the best Canuck but also has been guilty of giving up some soft goals.

“I want to thank all the players that we scored one more goal then I let in,” he said Friday. “Thank God.”

The Canucks haven’t won a playoff series since defeating the San Jose Sharks in the 2011 Western Conference final. Since losing in Game 7 of the Stanley Cup final Vancouver has missed the playoffs five times in six years and fired three coaches.

“This franchise has been through a lot,” said Horvat. “This last four years, not making the playoffs, we’ve taken it to heart. We wanted to come out and prove ourselves and play hard.

“To finally get a win under our belt and win a playoff series it feels great. But we have lot more work to do.”