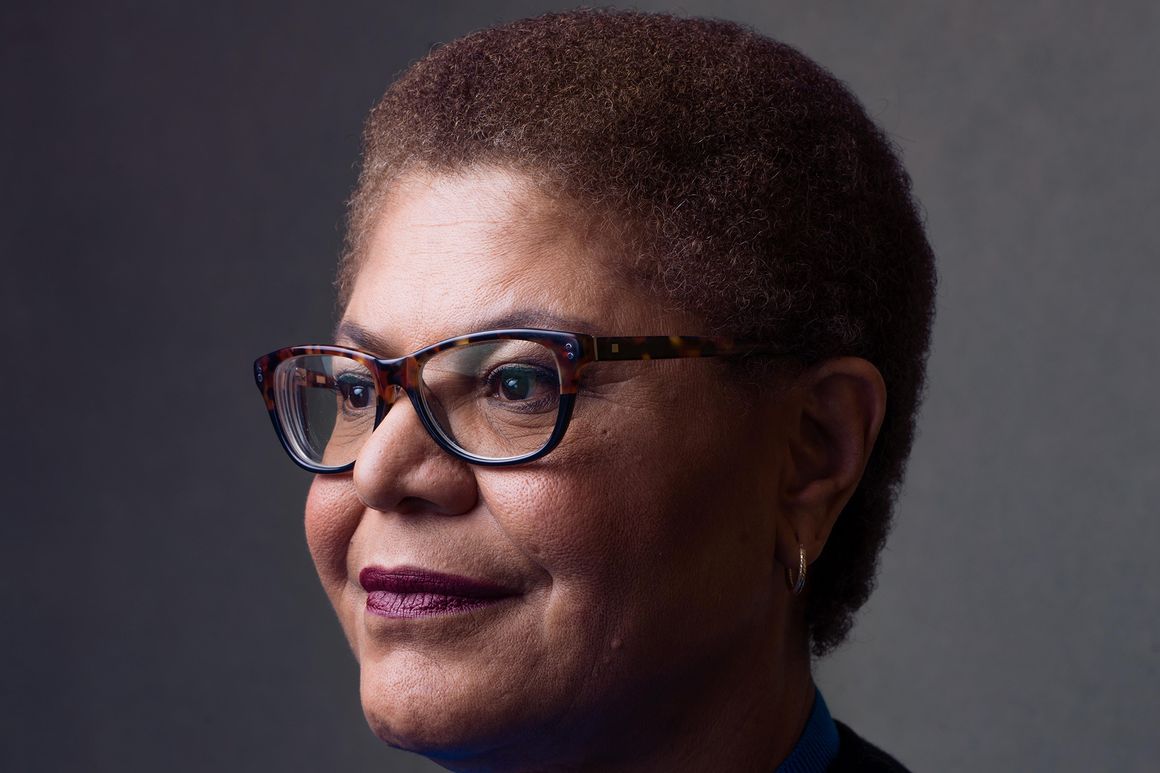 LOS ANGELES—On Election Day in the spring of 1968, 14-year-old Karen Bass was going door to door, trying to persuade her Los Angeles neighbors to vote for Robert F. Kennedy in the Democratic presidential primary. The charismatic candidate had energized young voters with a campaign focused on economic justice and racial equality. The teenage Bass saw him not just as a progressive politician, but as the activist she wanted to be.

That night, as Kennedy left the Los Angeles rally celebrating his primary win, he was shot to death. The coalition that Kennedy had assembled crumbled over the next few months, and Richard M. Nixon—RFK’s polar opposite—was elected president. That outcome left its mark on Bass, who had already grieved the murders of the Rev. Martin Luther King Jr. and Malcolm X.

“I realized it’s not about a single individual leading the charge,” she said in a recent interview. “The assassinations I saw growing up taught me that every time you had a major leader lost, things fell apart.”

Today Karen Bass, 66, is a veteran politician in California and head of the Congressional Black Caucus. She’s a bona fide progressive, a congresswoman in her fifth term who has trounced her opponents in every race she’s run, a former physician’s assistant with a health sciences degree, a stalwart advocate for women and children, a longtime promoter of police reform and the first African American woman in the nation’s history to lead a state legislative house.

Yet among voters outside of California, her name often draws a blank. Even as she is under serious consideration to be Joe Biden’s vice presidential running mate on the Democratic ticket, she has one of the lowest public profiles among the top contenders. She’s famously reluctant to be photographed, and only recently have the national media begun to pay her serious attention.

What might seem like uncommon reticence for a politician on the national stage, however, looks different to observers and journalists who have watched Bass work for decades in Los Angeles: as a community-driven operator whose low profile is a key part of her effectiveness, not an obstacle to success.

“[It’s] not a calculated political style. It’s just her authentic self. And people have always seemed to respond to that,” says her longtime mentor and Black L.A. political dean Mark Ridley-Thomas.

In 1990, as a community activist in South Los Angeles, Bass founded a local nonprofit called the Community Coalition, with the mantra of “no celebrity-style leadership.” The phrase was written in the founding documents and was part of every orientation. “If you’re here to make a name for yourself,” Bass would say to new employees, “you should find another place to work.” When she was elected to the California State Assembly in 2004, she carried that attitude into her political career. In Congress, she’s considered a bridge-building politician who can draw accolades and concessions from both sides of the aisle, even as the issues she cares about most—from gang violence to foster care—aren’t usually at the center of the national conversation.

Some see her low-key, disciplined approach as an asset for the VP slot: She’s less likely to draw negative attention on the campaign trail, and she has indicated that she’s not inclined to use the vice presidency as a launching pad for presidential ambitions of her own. But her low profile can look like a liability, too. It’s stranded Bass so far off the public’s political radar screen that her inclusion on Biden’s list of potential running mates left people across the country scratching their heads.

Less so Angelenos who know her and her work here.

“I find it interesting that people are kind of amazed that she’s on the list,” says Los Angeles City Councilman Marqueece Harris-Dawson, who lives in Bass’ district, which stretches from the wealthy mansions of Westwood to impoverished blocks in South Los Angeles. Her value can’t be measured by public bill signings and TV sound bites, he argues: “She is all about the work, and not about getting the credit.”

Bass’ 37th Congressional District is one of the most diverse in California: one-quarter white and one quarter Black, 40 percent Latino and 8 percent Asian-American. Long before she won her House seat, she understood the district’s strengths and afflictions, and how they connected with the nation’s needs.

In the 1980s, while she was working as a physician’s assistant, Bass, a Los Angeles native, watched the city’s Black neighborhoods deteriorate. Well-paying factory jobs disappeared, and school spending shrank. She could catalogue the scourge of crack cocaine by the people she knew who suddenly disappeared. The epidemic of drug addiction taking root back then became the catalyst for her activism. It was changing the landscape of entire communities—disrupting families, destroying the promise of young lives, feeding the push for mass incarceration and fueling the rise of dangerous criminal gangs.

In response, Bass invited a group of African American and Latino activists to gather in someone’s living room, where they laid out a vision for what they called then the Community Coalition for Substance Abuse Prevention and Treatment, now known as the Community Coalition. It was a grassroots effort to tap the collective wisdom of residents and empower them to advocate for their neighborhoods.

“She wanted to get young people involved in civic life as a way to push back on the narrative about young people at that time, that Black and brown youths were a disposable generation, that the only answer to the neighborhood’s problems was more and tougher policing,” Harris-Dawson recalls.

When the group began surveying residents about their most pressing needs, it turned out that neither drug abuse nor police brutality led the list. Their biggest complaint was that there were too many liquor stores. These weren’t the kind of stores that dot suburban landscapes, where you pick up a good pinot on your way home from work. In a community with a shortage of markets and too few parks, liquor stores seemed to be on every block. Selling loose cigarettes and cheap alcohol, they were magnets for vagrants, drug dealers and addicts. The coalition organized protests that closed some outlets. In the 1992 civil unrest after police were acquitted of beating Rodney King, more than 200 liquor stores burned down, and the coalition made sure the worst offenders never returned.

Shutting down a liquor store might not seem like a political thing. But for Bass, politics is an extension of her early community activism. In Sacramento and, now, Washington, D.C., her legislative agenda has been heavy on issues that plague low-income Black and brown neighborhoods: inadequate health care, too few job opportunities, too many children in foster care. At the heart of her politics is the same goal that fueled her activist streak: giving ordinary people access to the levers of power—whether that’s teaching grandmothers how to advocate for the resources they need when they wind up raising their grandchildren, or grooming young people to be leaders with classes, counseling and protests that force school leaders to listen to their voices.

“She cares about L.A. and she cares about South Los Angeles, and she particularly cares about the plight of Black America,” says Charles Erwing, who was born and raised in Bass’ district and spent a year working for her as a field representative. “Her agenda in Congress has been an extension of her work in South Los Angeles,” he says. “It’s work that changes systems and touches individual lives.”

The issues she has championed rarely have gotten national attention. But since she was elected to Congress in 2010, Bass has never garnered less than 81 percent of the vote. Los Angeles political consultant Jasmyne Cannick says that’s a better measure of her worth “than whether people in Boston recognize her name.”

Bass’ consideration for the VP spot might have surprised some political watchers. But people who’ve worked with her say she has a lot to offer the Democrat ticket.

Earl Ofari Hutchinson, an author and a political analyst who has known Bass for more than 30 years, points to two other strengths. “One is she’s highly organized and always well prepared. She studies the issues thoroughly,” he says. “The other is her ability to effectively network with stakeholders and political colleagues.”

But before governing comes campaigning. And in this era of confrontational politics, amid protests that characterize compromise as weakness, would Bass be considered radical enough to draw young activist voters to this very old Democrat ticket?

Even conservatives credit Bass for an across-the-aisle approach to getting work done. As California Assembly speaker in 2009, she was both revered and reviled for the sacrifices she exacted from legislative colleagues to close a $42 billion recession-induced budget gap. Voters criticized Bass and fellow Democrats for agreeing to school spending cuts, while tax hikes ended the political careers of some Republicans. (Bass and three of her legislative partners—two Republicans and one Democrat—received the John F. Kennedy Profiles in Courage Award in 2010 for their work to keep the state on track.)

Her reputation as a conciliator, not unlike Biden, could turn off some voters on the left. But Ridley-Thomas, her mentor, doesn’t see it that way. “Karen’s pretty skillful at developing relationships, at working with those with whom she disagrees,” he says. “But that’s not because she’s without core values. It’s more to the point of just being part of her personality.”

In fact, her work in neighborhoods that others have written off has earned Bass respect from progressive activists. “She’s a community organizer in the truest sense,” says Melina Abdullah, a Cal State Los Angeles professor and co-founder of the Los Angeles chapter of Black Lives Matter. “Her current job is as an elected official, so her way of advocating has to align with that,” Abdullah continues. “But what she never does is condemn those of us who have to advocate from the outside. Everyone I know appreciates having a partner to make manifest whatever it is we’re advocating for.”

While acknowledging that she’s “not Elizabeth Warren, who would fire up progressives,” Hutchinson worries more about middle-of-the-road voters. “She’s a solid progressive and a Black woman. That will play well in California and other blue states, but it’s deeply problematic in the five heartland states … that will decide the White House,” he says. Bass’ history of travel to Cuba, beginning as a 19-year-old, has drawn scrutiny recently as another potential hurdle for swing voters, particularly in the must-win state of Florida.

Cannick, the L.A. political consultant, says she has heard talk that Bass’ image might work against her, because women often are judged not just on their platforms but on their style and appearance. “Some people have said that Karen doesn’t have ‘the look,’” Cannick says. She wears her hair short, in a natural style. Her fashion choices tend to be button-downed, not flashy. “Karen is natural, she’s real,” Cannick says. “That’s why people relate to her. This is a chance to see how that plays out.”

Since she first ran for office in Los Angeles more than 15 years ago, Bass told me, she’s been advised that she needs to learn how to brag; Ridley-Thomas, for one, says he has often encouraged Bass to talk herself up more. “I learned after I took office that if I didn’t talk about what I was doing, people would think I wasn’t doing anything. They needed to see and hear me,” Bass says.

Now, with Biden’s VP selection expected to be announced any day now, she is taking that advice more seriously, making the rounds on TV news shows and programs like “The View”—even if it doesn’t come naturally for a politician reared in the world of community activism.

“I’ve had a hard time adjusting my language to talk about me,” Bass admits. “We live in a celebrity culture, so I had to unwind some of that reluctance.”