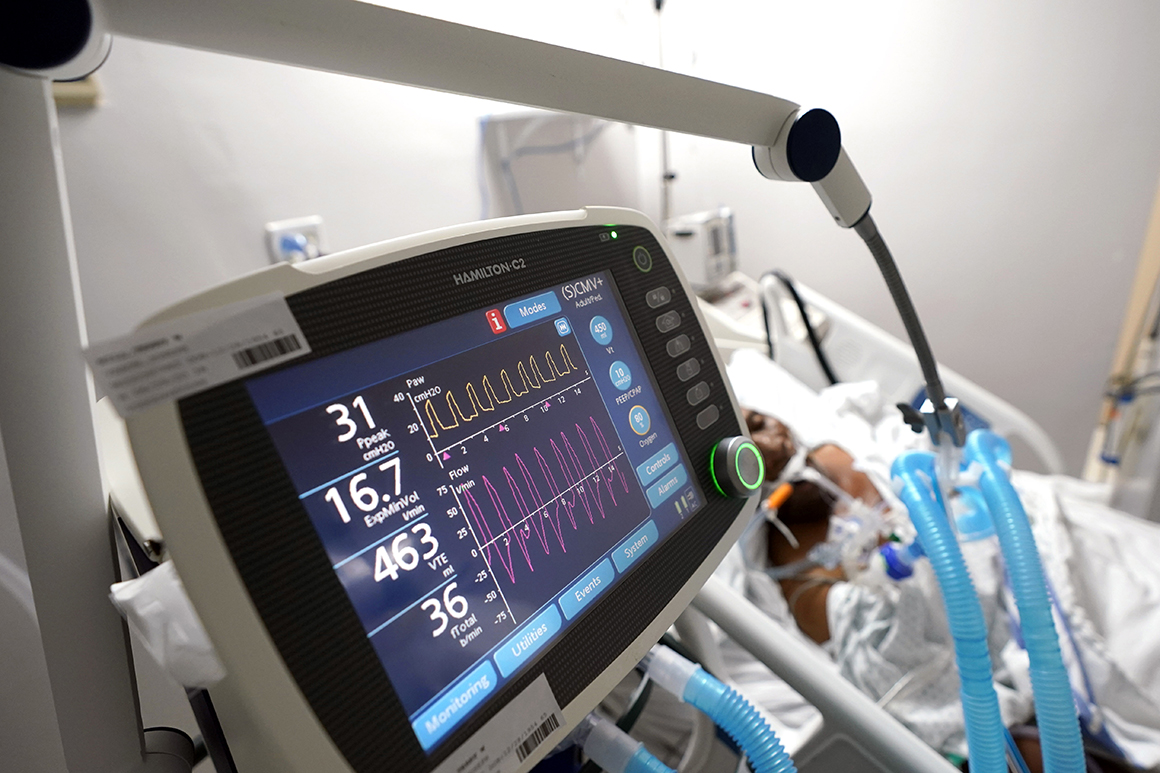 Questions about allocating ventilators, staff and other scarce resources were circulating long before the coronavirus pandemic. | David J. Phillip/AP Photo

State policies for rationing health care during the coronavirus pandemic could allow doctors to cut off treatment for some of the sickest patients in hot zones and revive the specter of so-called death panels, say disabled rights groups who are urging the Trump administration to intervene.

The effort has recently gained urgency due to guidelines in Texas and Arizona that let doctors base treatment decisions on factors like a patient’s quality of life if they survive, or the odds they’ll live at least five years. The advocacy groups since March have filed an unprecedented 11 complaints with the Department of Health and Human Services’ Office of Civil Rights, which has mediated four cases and could add more as Covid-19 continues to spread across most of the country.

The administration’s point person is Roger Severino, an anti-abortion conservative who heads the civil rights office and has expressed concern about the way health providers measure disabled patients’ odds of survival.

“They’ve been a real partner since the beginning in immediately responding to these concerns — not just considering but immediately responding and saying, ‘This is our issue too,’” said Shira Wakschlag, director of legal advocacy for The Arc. She said Severino’s policies have “sent a message to states across the country.”

Questions about allocating ventilators, staff and other scarce resources were circulating long before the pandemic and factored prominently in the debate over Obamacare, when conservatives tried to whip up controversy over the idea of bureaucrats on “death panels” deciding who was worthy of care.

But the issue gained new resonance in June, when an Austin, Texas, hospital halted treatment of a quadriplegic patient who contracted Covid-19 and moved him to hospice care, where he died. ADAPT of Texas filed a complaint to HHS in late July seeking an investigation into the decision-making about the patient, Michael Hickson, which ran counter to his wife’s wishes.

HHS’ most sweeping action so far centered on Tennessee’s crisis standards of care. The state in late June agreed to update triage plans and clarify that providers consider only a patient’s chance of survival, not quality of life or issues strictly related to their disability. The policy — which HHS says applies to patients with conditions like advanced neuromuscular disease, metastatic cancer, traumatic brain injury and dementia — is viewed by advocates as a blueprint for other states.

The groups are now setting their sights on Arizona, one of the nation’s Covid-19 hot spots, which issued a triage policy in June that critics say allows doctors to reject critically sick patients if they think they won’t live five years after a successful Covid-19 treatment.

Severino, who’s been involved in high-profile efforts to lift protections for LGBTQ patients and back health care entities that refuse to cover abortion services, said in an interview that protecting the disabled from discrimination during the pandemic is a defining part of his agenda.

“It sends a message on who we are as a nation, it’s a reflection of our national character — how we treat the vulnerable,” he said. The lack of clear guidelines in some states “puts an unfair burden on medical professionals and opens the door to discrimination.”

The civil rights office is largely limiting itself to instances where advocacy groups file formal protests. Early during the pandemic, it reminded states that it would enforce federal anti-discrimination laws. But advocates say violations still occur, often out of ignorance. And because not all hospitals are open about their triage policies and some states lack clear standards, the groups sometimes have to rely on anecdotal evidence.

Concern about discrimination is rising as the pandemic swamps more states and tests hospitals and health systems in its path.

“Someone like myself who is disabled, who has a job — I contribute to society, I’ve done good things for the world — if I am going against someone who visited the Poconos and got Covid, they’ll automatically assume my life is less valuable,” said Steven Spohn, a 39-year-old disability rights advocate with spinal muscular atrophy.

Most disability rights advocates acknowledge that a national standard for all the country’s hospitals isn’t practical, and that states need to act. Their goal is clear guidance that would discourage withholding care based on a provider’s idea about a patient’s quality of life or guesses about long-term survival. Disabilities should also be accommodated over the course of immediate and follow-up treatment, as guaranteed by the Americans With Disabilities Act and Obamacare, they say.

But many states — even in virus hot spots — are dragging their feet. Texas Gov. Greg Abbott has yet to respond to an April appeal to set ground rules for triaging patients, in case hospitalization rates outpace the supply of beds. In early July, as caseloads surged and some overwhelmed hospitals started turning away patients, the groups tried again, writing that “what might have seemed unnecessary in April is, we believe, clearly urgent today.” Abbott’s spokesperson didn’t respond to a request for comment.

It’s been left to some local medical bodies to fill the gaps. A health advisory panel for the Dallas-Fort Worth area — home to nearly a third of the state’s population and comprising its second-highest case count — released care rationing guidelines that disability rights groups quickly condemned. Under the policy, doctors could reject outright patients with certain medical conditions, or penalize anyone they think has a grim long-term prognosis — regardless of the person’s short-term outlook for surviving Covid-19. Discrimination based on disability, age or race and ethnicity was not expressly prohibited.

The guidelines were pulled without explanation almost immediately after Disability Rights Texas complained to Severino’s office late last month. The website of the panel that wrote the policy now says it’s under revision.

Meanwhile, Rio Grande City, a border town with a surge in cases had already decided to adopt those Dallas-area triage measures. Jose Vasquez, the health authority of Starr County, Texas, defended the decision to local media, saying rising infections had made the situation “desperate.” The local hospital is tiny, with an eight-bed Covid-19 unit, but had admitted nearly 30 patients with the virus, including three on ventilators and life support, and Vasquez said it wouldn’t be able to keep functioning at that rate.

Vasquez did not respond to a request for comment, but Kevin Reed, an attorney for the hospital district, said the guidelines aren’t being followed and haven’t been necessary — even though the hospital is still at capacity with Covid-19 patients — because they’ve been able to add makeshift bed capacity and the state has sent in contract staff.

Reed noted that the hospital district weighed adoption of the triage guidelines before they’d heard of Disability Rights Texas’ concerns — but that they’re currently discussing the issue with the advocacy groups and medical experts.

“This is a complex issue and, if the district adopts guidelines in the future, it wishes to do this right,” Reed said.

The Arizona triage policy is shaping up to be the next big fight, because of the way it could allow doctors to reject critically ill patients and prioritize people based on their “opportunity to experience life stages.” It also allows health workers to pull ventilators or beds from patients who develop conditions while hospitalized that change their prognosis.

Arizona’s chapter of The Arc appealed to to the HHS civil rights office late last month. The state insists its guidelines won’t “categorically” deny care to anyone “based on stereotypes, assumptions about any person’s quality of life, or judgment about a person’s ‘worth’ based on the presence or absence of disabilities.”

But against this backdrop, Arizona’s hospitals also asked officials to waive the state’s discrimination laws so they can’t be sued if they have to start rationing care.

“Giving physicians and triage committees these kinds of predisposed discriminatory factors to ‘break ties’ is going to bleed over into all kinds of situations that are not necessarily in the writing,” said Matt Valliére, executive director of the Patients’ Rights Action Fund. “They would be immune from any poor decision-making that’s even more discriminatory than what is in this [guidance], because that’s what happens in crisis scenarios.”

Front-line doctors have become embroiled in the debate. Beyond having to make life-or-death decisions they face the possibility of lawsuits over triage decisions.

“Rationing is already here,” a group of 10 physicians wrote in late May in the New England Journal of Medicine. They argued that priority should be given to the critically ill Covid-19 patients who are young — or as they put it, “who are sick but who could recover with treatment.”

But leaders of the American Medical Association and the American College of Physicians have taken a different tack, pointing to the way the pandemic has laid bare long-time inequities in the system. The groups rejected any triage measures that could discriminate against whole swathes of people like the elderly as “not ethically defensible.”

“The pandemic has revealed a need for a much more thoughtful and ethically, medically justifiable approach to the clinical aspects of preparedness planning,” ACP President Jacqueline Fincher and AMA President Patrice Harris wrote in a June op-ed in Modern Healthcare.