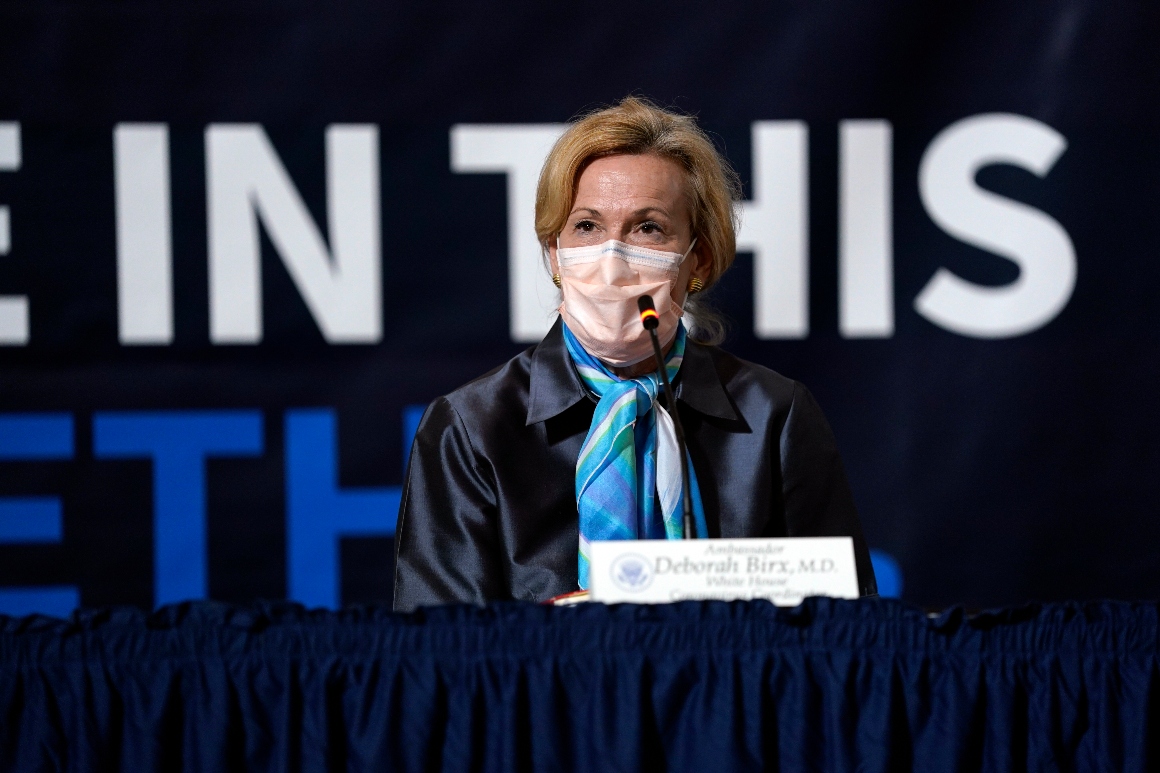 “So Crazy Nancy Pelosi said horrible things about Dr. Deborah Birx, going after her because she was too positive on the very good job we are doing on combatting the China Virus, including Vaccines & Therapeutics,” Trump wrote on Twitter. “In order to counter Nancy, Deborah took the bait & hit us. Pathetic!”

POLITICO reported last week that Pelosi tore into Birx in closed-door negotiations with administration officials, saying the White House was in “horrible hands” with the public health expert leading the coronavirus taskforce. Pelosi continued her criticism of Birx on Sunday during an appearance on ABC.

Past reporting by The New York Times presented Birx as a coronavirus optimist who told Trump that the United States was on its way to flattening its curve like Italy and that outbreaks were easing.

Yet on Sunday, Birx struck a more somber tone when she said the pandemic was entering a new, dangerous phase.

“What we are seeing today is different from March and April. It is extraordinarily widespread,” Birx told CNN, adding that the pandemic was affecting both urban and rural areas.

Trump’s public attack on Birx was at odds with recent messaging from his top spokespeople, who fiercely defended Birx days ago following Pelosi’s criticism.

“Dr. Birx is one of the smartest, honest, most talented professionals I’ve ever worked with. The baseless, political attacks against her and her long record of saving lives and protecting public health are disgusting and shameful,” White House deputy press secretary Judd Deere wrote on Twitter on Sunday.

And following The New York Times article that featured Birx’s role in the White House, White House press secretary Kayleigh McEnany ended her July 21 press briefing with a strong backing of the doctor.

“Dr. Birx is an extraordinary doctor who’s served this country, dedicated her time to serving our country as an Army colonel,” McEnany said. “And it is appalling the attack that I saw on her in the New York Times, based on no facts.”

Speaking at the White House later Monday afternoon, Trump again split with scientists on his coronavirus task force by endorsing the use of hydroxychloroquine. When asked why he still supports the drug despite pushback from task force members Anthony Fauci and Adm. Brett Giroir, Trump took the opportunity to distance himself from Fauci.

“I don’t agree with Fauci on everything,” Trump said, citing Fauci’s earlier resistance to mask-wearing and banning travelers from China. “It doesn’t mean he’s a bad person, because he’s not. He’s a good person, I like him. But we disagree on things.”

Fauci listed the quick closure of America’s borders from China and the European Union as one of the great successes of the country’s coronavirus response, during a Monday interview with The Journal of the American Medical Association.

Matthew Choi contributed to this report.