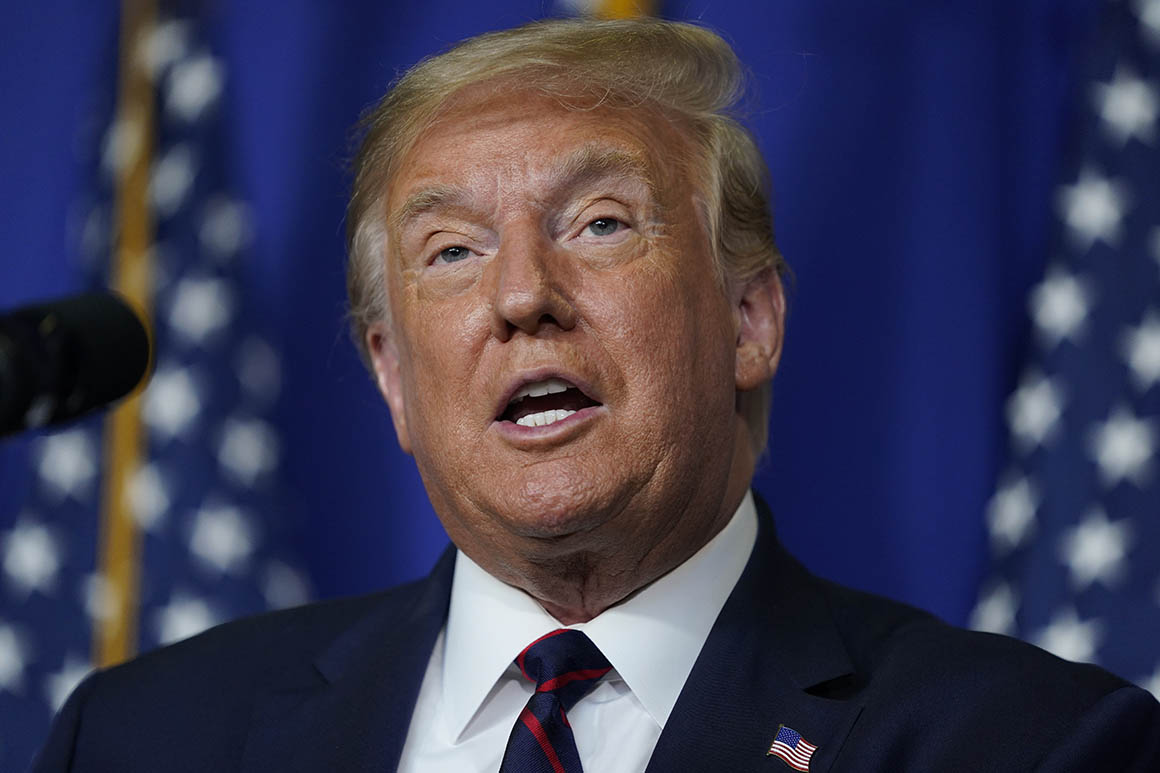 President Donald Trump plans to sue to stop Nevada from issuing mailed ballots to all active voters, he announced at a White House briefing on Monday.

Trump had already threatened legal action earlier in the day, suggesting mailed ballots would make it impossible for Republicans to win there in the November general election. Nevada state lawmakers approved legislation on Sunday to automatically send mail-in ballots to voters. Gov. Stephen Sisolak of Nevada, a Democrat, is expected to sign the bill into law. Trump said he planned to have the lawsuit filed Tuesday.

The president has aggressively advocated for in-person voting in recent months even as state-level election officials move to expand mail-in voting amid the nationwide outbreak of coronavirus, which many fear could be easily spread at polling places. He stopped short of saying he would issue an executive order in response to the push for more mail-in voting, though he said: “I have the right to do it. We haven’t gotten there yet. We’ll see what happens.”

The president had already threatened legal action against Nevada in a tweet Monday morning in which he characterized the state’s Legislature as having partaken in a “coup” by passing the measure.

“In an illegal late night coup, Nevada’s clubhouse Governor made it impossible for Republicans to win the state,” Trump wrote on Twitter. “Post Office could never handle the Traffic of Mail-In Votes without preparation. Using Covid to steal the state. See you in Court!”

The president argued in April that mail-in voting “doesn’t work out well for Republicans,” and has repeatedly claimed that the ballot-casting practice results in widespread incidents of voter fraud.

But Republican political operatives have embraced vote-by-mail, and a recent study found that it does not benefit one party over another.

During the Monday news conference, Trump looped his objections to mail-in voting with his longstanding criticisms of the U.S. Postal Service. Though he praised individual postal workers, he claimed the postal system did not have ample infrastructure to handle a national election and that it had been a money pit for years.

Postmaster General Louis DeJoy, a major Trump donor, has gutted large segments of the Postal Service in an effort to cut costs, The Washington Post reported, leading to fears it would not be able to deliver ballots in time for the November election. The House Oversight Committee on Monday requested DeJoy explain his reforms and the delays that have been plaguing the Postal Service.

Despite the president’s insistence to the contrary, cases of election fraud in the U.S. are exceedingly rare. Experts acknowledge there are some slightly higher fraud risks associated with mail-in balloting, but only when proper security measures are not put in place.

Trump proposed on Thursday that the U.S. delay its general election, currently scheduled to take place in less than 100 days, citing his unsubstantiated complaints about mail-in voting.

He has also attacked states such as Michigan that have moved to mail out request forms for absentee ballots, not the ballots themselves.

Although Trump has criticized mail-in ballots, he has deemed absentee ballots to be “fine” because “a person has to go through a process to get and use them.” Voting rights experts, however, say there is no difference between mail-in voting and absentee voting.

Five of those states — Colorado, Hawaii, Oregon, Utah and Washington — regularly mail every voter a ballot, while California and Vermont, along with the District of Columbia, have announced their intention to do so in this election because of the pandemic.

An analysis last month of voting in three states that send ballots during every election cycle found that officials identified an infinitesimal amount of potentially fraudulent ballots.

House Democrats passed a bill in May that would mandate all voters be sent a ballot in case of emergency, along with other sweeping changes to the American electoral system. That legislation is largely opposed by Senate Republicans and is unlikely to become law.