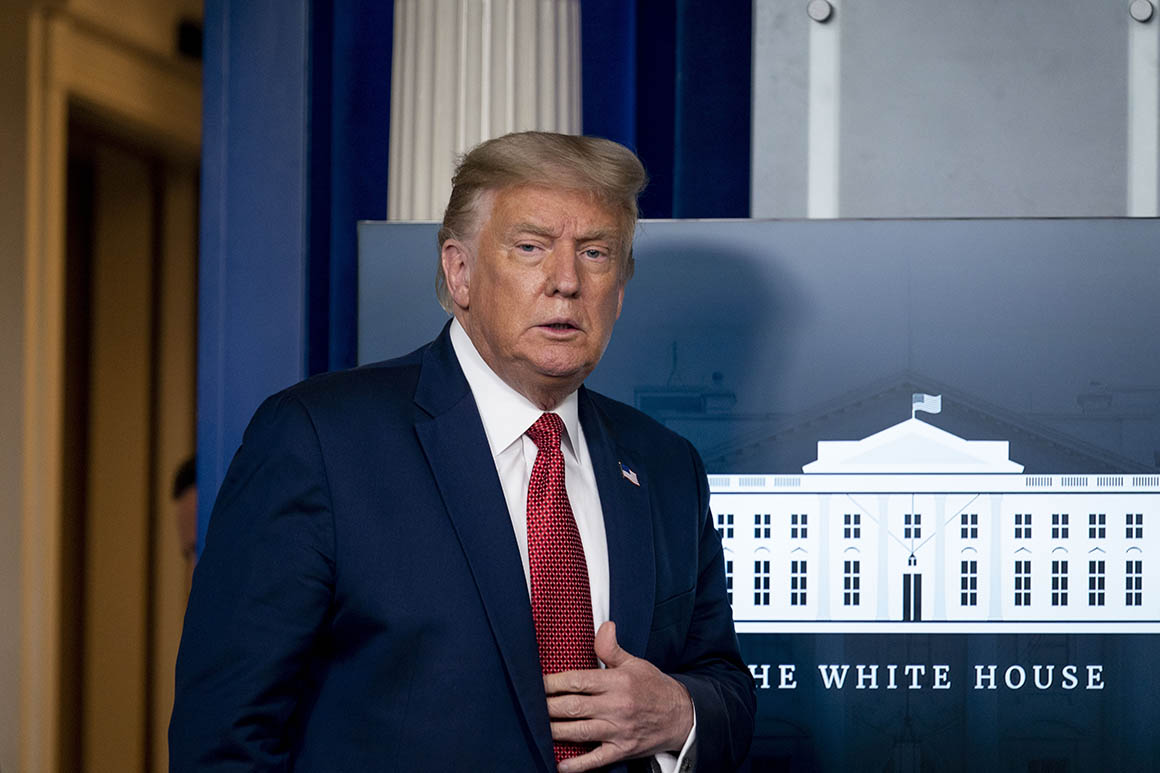 President Donald Trump let loose in a pair of lengthy radio interviews Tuesday morning, weighing in on foreign affairs and cultural flashpoints while continuing to speak dismissively of the rampant coronavirus threat.

Much of the president’s remarks centered on the return of sports amid the pandemic, as he railed against athletes who refuse to stand during the national anthem and rallied for college football to resume in the fall.

The president and several congressional Republicans have advocated this week for games to carry on as scheduled, even as The Detroit Free Press reported Monday that the Big Ten Conference was expected to cancel its fall college football season.

Although athletes and schools have expressed escalating coronavirus-related health concerns, Trump told conservative talk radio host Hugh Hewitt later Tuesday morning that “they should play football.” But in that half-hour interview, he stressed players should also “stand for our flag and respect our flag.”

“Basketball didn’t do that, and they’re down [the] tubes,” Trump said. “Their ratings are terrible. Like, terrible. People are angry about it.”

The popular American pastime of college football is just the latest facet of daily life now upended by the ongoing Covid-19 outbreak within the United States — a public health crisis that Trump said Tuesday had damaged his rapport with Chinese President Xi Jinping.

“I had a great relationship with President Xi. I like him,” Trump said. “But I don’t feel the same way now.”

Trump did not allude to a similar deterioration in his relationship with Russian President Vladimir Putin, who announced earlier Tuesday that his government had become the first to officially register a coronavirus vaccine and declare it ready for use, despite international skepticism.

The president only argued that he had been significantly tougher on Moscow than his predecessor, Barack Obama, whose administration he accused of spying on him in a vast bureaucratic conspiracy that allegedly involved former Vice President Joe Biden.

Trump made several comments Tuesday critical of Biden, the presumptive Democratic presidential nominee, referencing a recent U.S. intelligence assessment that concluded Russia is targeting Biden ahead of November’s election while China is hoping Trump will lose.

“They’ll own the United States if he wins,” Trump said of Beijing. “And with me, they were having the worst year in 67 years because I tariffed the hell out of them.”

The president also opined on the most anticipated political announcement of the week — Biden’s reveal of his running mate, who is expected to be named in the coming days.

“I think that I would be inclined to go a different route than what he’s done. You know, doing it the way he — first of all, he roped himself into, you know, a certain group of people, which is fine,” Trump said, referring to Biden’s pledge to select a female vice presidential nominee.