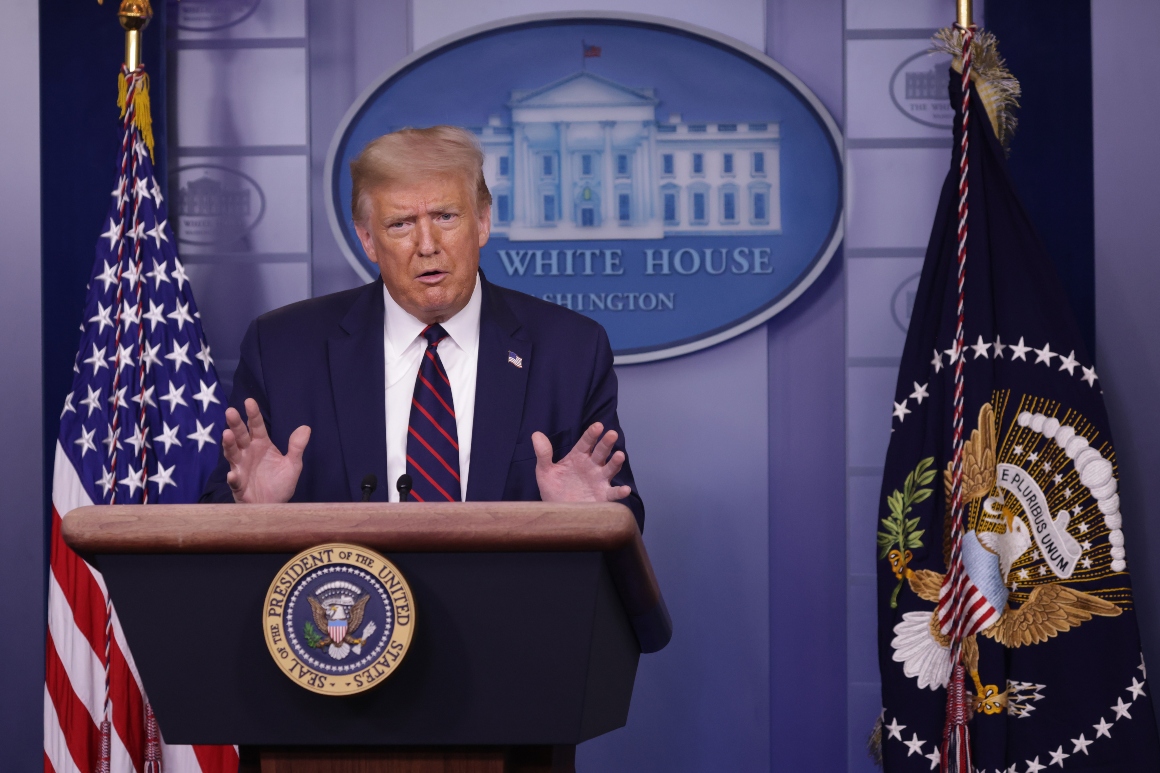 This past spring, President Donald Trump began a full-fledged assault on voting by mail, tweeting, retweeting and railing about massive fraud and rigged elections with scant evidence.

Then the Republican apparatus got to work backing up the president.

In the weeks since, Trump’s campaign and the Republican National Committee have taken to the courts dozens of times as part of a $20 million effort to challenge voting rules, including filing their own lawsuits in several battleground states, including Minnesota, Pennsylvania and Nevada. And around the time Trump started musing about delaying the election last week, aides and outside advisers began scrambling to ponder possible executive actions he could take to curb mail-in voting — everything from directing the postal service to not deliver certain ballots to stopping local officials from counting them after Election Day.

The actions can only make so much difference before November — elections are mostly run at the state and local level, and are subject to congressional authority. And some fellow Republicans are warning the president privately and publicly that attempts to restrict mail-in ballots could actually hurt the GOP in November, scaring Republicans from voting remotely even if they also refuse to vote in person during a pandemic. New polling has fueled these concerns.

But the flurry of activity is buoying the president in other ways. Namely, it has allowed Trump to present himself as a fighter on an issue that many of his most fervent supporters have taken up in the last few months.

Trump fans, said John Fredericks, a conservative radio host who serves on the Trump campaign’s advisory committee, “think Trump is going to win legitimately, but the Democrats are trying to steal the election by manipulating mail-out ballots. They want the president to jawbone enough so there’s a level of outrage to get rid of these ballots.”

Just because Trump’s claims of rampant mail-in voting fraud aren’t supported by evidence doesn’t mean election experts aren’t concerned about problems holding a presidential election during a pandemic. It’s unknown whether the United States Postal Service can handle a surge of mail-in ballots in a timely fashion, and other officials have cautioned about long lines and a shortage of workers at in-person polling stations, which have been limited during the coronavirus outbreak.

Some have predicted the crush of remote voting could mean a final winner in the presidential race between Trump and Democrat Joe Biden won’t be known for days or even weeks. Democrats are pushing for $25 billion for USPS in the next coronavirus recovery bill to help address those concerns, but it remains a source of disagreement with Republicans.

There have already been some some notable delays in down-ballot elections during the pandemic, including one New York race this summer. Six weeks after a Democratic primary for a U.S. House seat, all of the ballots have yet to be counted.

“This is a rare case where the president is not overstating the case,” argued Tom Fitton, president of Judicial Watch, a conservative group that has sued in North Carolina and Pennsylvania over the accuracy of voting rolls. “Frankly he’s understating the problem that I think we are going to face on Election Day. The system is going to break.”

Trump and his team are trumpeting these fears.

The Trump campaign is holding events touting its legal actions on voting rules. And privately, the White House is debating possible further action, according to two people familiar with the situation. The White House declined to comment on whether Trump would be signing an executive order on the issue.

“All Americans deserve an election system that is secure and President Trump is highlighting that Democrats’ plan for universal mail-in voting would lead to fraud,” said White House spokeswoman Sarah Matthews. “While Democrats continue to call for a radical overhaul of our nation’s voting system, President Trump will continue to work to ensure the security and integrity of our elections.”

Trump has spent months railing against mail-in voting as the pandemic raged and his poll numbers dropped nationally and in battleground states. Yet on Tuesday, Trump appeared to change his mind for one battleground state: Florida. He claimed that because the state’s two back-to-back Republican governors — Ron DeSantis and Rick Scott — had managed elections professionally. Sophia Lin Lakin, deputy director of the American Civil Liberties Union’s Voting Rights Project, dubbed Trump’s action “hypocritical.”

Voters in most other states can request an absentee ballot by mail without providing a reason. And numerous states are still reviewing their voting policies as coronavirus infections continue to rise.

Already, Democrats and left-leaning groups are pushing to make voting by mail easier and to educate voters about how to properly cast remote ballots. Republicans are fighting voting rule changes in 17 states, going to court 40 times, drawing on a recently doubled legal budget of $20 million. At the RNC and Trump campaign, 12 staff attorneys and several dozen more outside lawyers are working on the issue across the country, according to an RNC official.

Republicans have intervened to do just that in numerous states. In Iowa, they sued to prevent third parties from filling out personal information on absentee ballot requests. In Minnesota, they tried to prevent ballots from being sent to inactive voters. And in Nevada, the Trump campaign on Tuesday filed a lawsuit against the state over a plan to send ballots to active registered voters this November.

“This unconstitutional legislation implements the exact universal vote-by-mail system President Trump has been warning against for months,” said Jenna Ellis, a senior legal adviser for the Trump campaign.

Republicans have already won some battles. A Democratic super-PAC and other left-leaning groups agreed to drop a lawsuit over voting rules in Florida after a judge refused to order changes immediately, including a request that the government cover postage costs for mail-in ballots. Another lawsuit seeking to extend the state’s absentee ballot deadline was dismissed in Pennsylvania

“All politicians are paranoid about potential fraud in their campaigns. And sometimes rightfully so,” said Pat McCrory, the former Republican governor of North Carolina, who blamed fraud when he lost his 2016 reelection bid by 10,000 votes out of more than 4.6 million ballots cast. “He knows states like Michigan and North Carolina — like last time — could be close.”

Republicans aren’t the only ones taking action on mail-in voting. Democrats and outside groups on both sides of the issue have similarly taken to the courts over voting rules — more than 160 lawsuits have been filed nationwide, according to election experts.

The potential problems with mail-in voting are varied and numerous. Voting rolls that determine who receives a ballot could be inaccurate, ballots could be sent to the wrong address or lost in the mail, or voters may have their ballot tossed out for not following directions, for not having a proper signature or for having a name that doesn’t exactly match information on file with election officials.

Democrats have argued these concerns can be addressed through funding, tweaks to the rules and voter education. Conversely, Republicans have cited them as reasons to limit mail-in voting.

“They’re absolutely exaggerating and overstating the fraud. It is not a rampant problem,” said Sean Morales-Doyle, deputy director at the Brennan Center for Justice’s Democracy Program, where he focuses on voting rights and elections. “It is not the existential threat that the president says it is.”

But states that allow voting by mail have spent years building the infrastructure necessary to handle both the outgoing and incoming ballots, said Hans von Spakovsky, who manages the conservative Heritage Foundation’s Election Law Reform Initiative.

“We’re only three months from the election,” said von Spakovsky, a former member of the Federal Election Commission. “To think states could do this by November is impractical.”

Trump, impatient with the slow nature of lawsuits, suggested last week that the November election be postponed, though he later claimed he was merely trying to highlight the possibility of fraud after he faced a backlash from even members of his own party. Only Congress can change the date of the election.

Since then, Trump has mused to aides about what executive orders, if any, he could sign to curb voting by mail.

“I have the right to do it,” Trump told reporters Monday. “We haven’t gotten there yet. We’ll see what happens.”

Yet even conservatives allies, including von Spakovsky, are skeptical Trump has the authority to intervene in elections. John Yoo, a senior Justice Department attorney under former President George W. Bush, agreed. Yoo has been advising the White House recently on unilateral actions Trump could take on immigration, health care and taxes. But he said it didn’t appear Trump could take significant executive action on mail-in voting

Some suggested Trump could try to stop local officials from counting remote ballots after Election Day and direct the Postal Service to not deliver certain ballots to voters using an emergency declaration, according to one of the people.

Paul Steidler, who studies the Postal Service at the right-leaning Lexington Institute, said the president can’t directly order the postmaster general to do anything, noting the Postal Service chief actually reports to a board of governors.

“He can’t order anything directly,” Steidler said. But others argued the postmaster general, a Trump ally and Republican fundraiser, might still be influenced by Trump’s statements.

Trump said Monday the Postal Service isn’t prepared for the onslaught of ballots. “How can the post office be expected to handle?” he asked. But Postmaster General Louis DeJoy told the Postal Service Board of Governors Friday the agency will do its job. “We will do everything we can to deliver election mail in a timely

Election experts said a more likely option for Trump would be sending federal officials into states under the guise of ensuring every vote is counted, citing the 15th Amendment or the Voting Rights Act.

Any of the moves would be immediately challenged in court.

“It would certainly be unprecedented to attempt to control any aspect of the election process,” said Richard Pildes, a professor of constitutional law at the New York University School of Law and leading expert on election law. “The courts would scrutinize any action closely.”