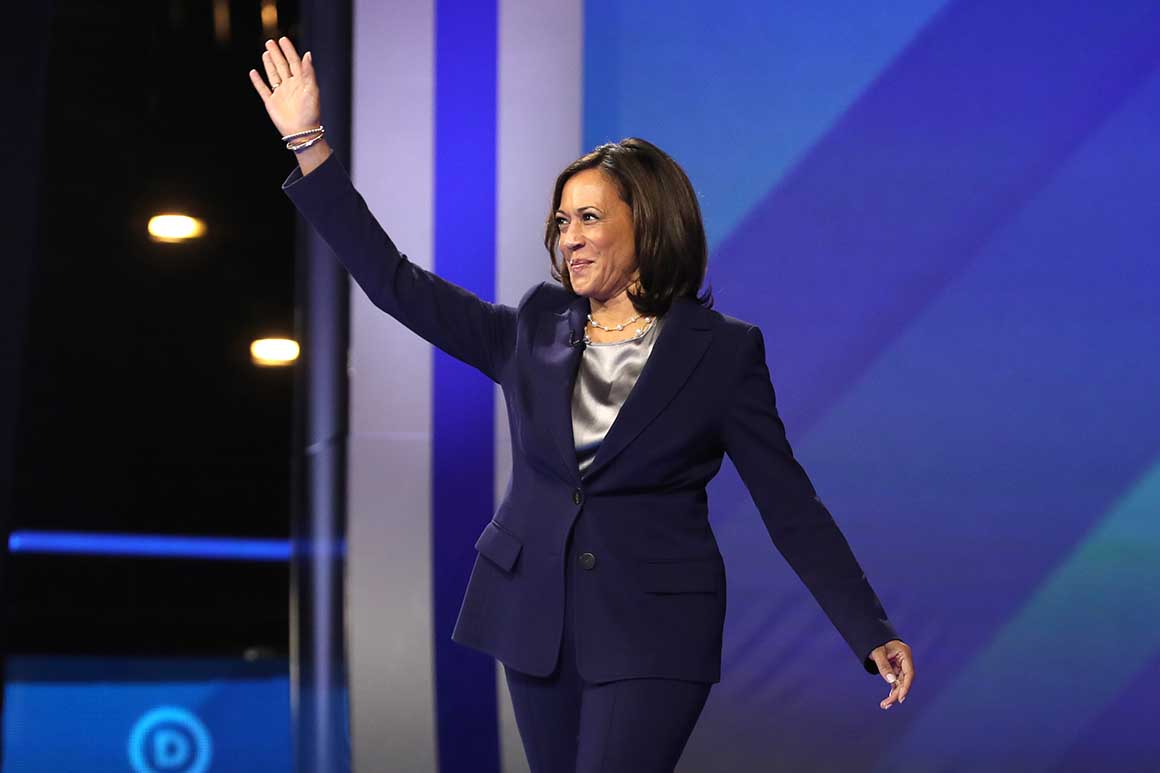 Kamala Harris has charted a meteoric rise within the Democratic Party as one of its most potent and effective messengers – even as she’s struggled to refine her own positions on issues galvanizing the party’s base.

The California senator joins Joe Biden’s presidential campaign as a barrier-breaking running mate who has built a national following through her fierce interrogations of Trump administration officials and championing of racial justice. It’s a resume that Harris’ allies contend is tailor-made for the moment, as the 2020 race plays out against the backdrop of a widespread reckoning on race and a spiraling pandemic that’s devastated communities of color.

But Harris’ shifting positions on key policy matters undermined her short-lived run for the presidency. A former California attorney general and district attorney, Harris faced criticism over a prosecutorial record that doesn’t always match with the progressive positions she espouses today. On health care, her waffling on “Medicare for All” during the presidential primary revealed a candidate torn between appealing to progressives demanding structural change and moderates favoring incrementalism – and satisfying none in the process.

“It took a little bit to get her footing,” said Roger Salazar, a California Democratic strategist and former Clinton White House official, adding that the next few months will test how Harris learned from her stumbles on the campaign trail. “Good leaders focus on the issues that are in front of them … and she’s a quick study.”

As both a former prosecutor and the lone Black woman in the Senate, Harris found herself at the center of a growing national debate over racial and social justice issues. Even as she has sought to cast herself as a “progressive prosecutor,” her prosecutorial record has drawn scrutiny from progressives who derisively labeled her a “cop” during her presidential run.

That record included fighting to keep people in prison in certain cases where there was evidence of wrongful conviction and shying away from investigating police shootings. Though she’s proclaimed herself a lifelong opponent of the death penalty, she earned the ire of many progressives when as California’s attorney general she appealed a judge’s decision finding the death penalty unconstitutional.

Critics on the left said she didn’t do enough to empty California’s packed prisons, and they took issue with the way Harris touted her prosecution and conviction rates. Harris has argued she was successful in going after international gangs that trafficked in guns, drugs and humans – while promoting progressive policies like jobs and education programs for low-level offenders, rather than harsh prison sentences.

Harris in recent years cast herself as a chief proponent for overhauling a criminal justice system that has exacted a disproportionate toll on communities of color. During her presidential campaign, Harris pledged to eliminate private prisons and mandatory minimum sentences as part of a broad proposal to end mass incarceration, taking specific aim at policies that overwhelmingly target Black and brown Americans.

Harris recently has focused on addressing the economic devastation wrought by the coronavirus and backed a new package of police reforms following the killing of George Floyd. She has supported a ban on evictions and foreclosures during the pandemic and proposed sending as much as $2,000 to people every month. She’s also been among those urging the Trump administration provide more relief to minority groups disproportionately hurt by the virus.

Perhaps no issue was more damaging to Harris’ presidential campaign than her fluctuating position on “Medicare for All.” As a Senate freshman and rising political star in 2017, she was among the first prominent Democrats to sign onto Bernie Sanders’ single-payer bill, at the time calling it “the right thing to do.”

But during the Democratic primary, after initially doubling down on the idea of eliminating private insurance in favor of a government-run system, she quickly backtracked. Her poll numbers tumbled amid weeks of questions about her core beliefs on a topic that has singularly cleaved the party’s liberal and moderate wings.

Harris ultimately pitched her own solution that sought to split the difference: giving Americans the choice of enrolling in tightly regulated private health insurance plans or picking a public one. But the proposal only raised further misgivings about Harris’ policy credentials and whether she had previously backed Medicare for All largely to score points with the Democratic base.

Since then, Harris has avoided weighing in on the coverage debate and has emphasized greater support for underserved communities amid a pandemic that she has warned has “worsened longstanding disparities in our country.” Harris is also among those calling for new investments to address the nation’s maternal mortality crisis, which has left Black women three times as likely to die from pregnancy-related complications than white women.

Even before her tough questioning of Brett Kavanaugh during his Supreme Court nomination hearings, Harris already had built a reputation as a hard-nosed interrogator through her bouts with the Trump administration’s immigration and homeland security officials.

Two years ago, she was a leading voice against the Trump administration’s policy of separating children at the border, joining protests at immigration shelters and advocating for expanded oversight of detention centers. She eventually become one of the highest-profile lawmakers to call for the resignation of then-Homeland Security Secretary Kirstjen Nielsen over family separations and detainment of pregnant immigrants.

As a presidential candidate, Harris advocated for using executive powers to reinstate and expand the Obama-era Deferred Action for Childhood Arrivals program and clarifying a path to citizenship for some Dreamers brought into the U.S. as children. It’s an issue where she has often sought to distinguish herself even within the Democratic Party: Harris was one of just three Democrats to oppose a compromise that would have given the Trump administration billions of dollars for a border wall in exchange for a path to citizenship for Dreamers.

More recently, Harris has been critical of Facebook and other social media companies’ handling of political speech, hate speech and misinformation online. But like Biden, she’s offered few proposals to address those issues. She’s also taken a more moderate stance on antitrust concerns, stopping short of embracing Elizabeth Warren’s call to break up tech giants – though she’s advocated for closer scrutiny from regulators.

When she was attorney general of a tech-heavy state, Harris played a central role in the fight against online sex harassment, pressing tech companies to make their platforms safer and advocating for greater leeway to prosecute cybercrimes. That effort culminated, most notably, in the arrest of the heads of Backpage.com over allegations that the classified ad website had knowingly become a hub for online prostitution. The case aided Harris’ political rise in the months leading up to her election to the Senate in 2016, even as it ultimately faltered and was thrown out on its merits.

Once in the Senate, she played a far less visible role in controversial legislation aimed at cracking down on illegal sex trafficking online. She ultimately supported the bill, drawing sharp criticism from those who argued it would do little to protect sex workers while creating new avenues for censorship on the internet.

As California attorney general, her role in securing a $25-billion settlement for California homeowners from big mortgage firms cemented her stature as a fierce consumer advocate in the wake of the devastating 2008 foreclosure crisis. Harris’ record as California’s top law enforcement official included prosecution of predatory lenders, protections for those hammered by student debt, and taking a tough stance on online consumer privacy issues.

Harris has long enjoyed the support of the Democratic base’s most activist women, labor and LGBTQ advocates for her stalwart backing of some signature issues. Those have included abortion rights, enforcement of California’s landmark climate change initiatives, a path to citizenship for undocumented immigrants, and the protection of marriage equality and LGBTQ rights.

Cristiano Lima contributed to this report.