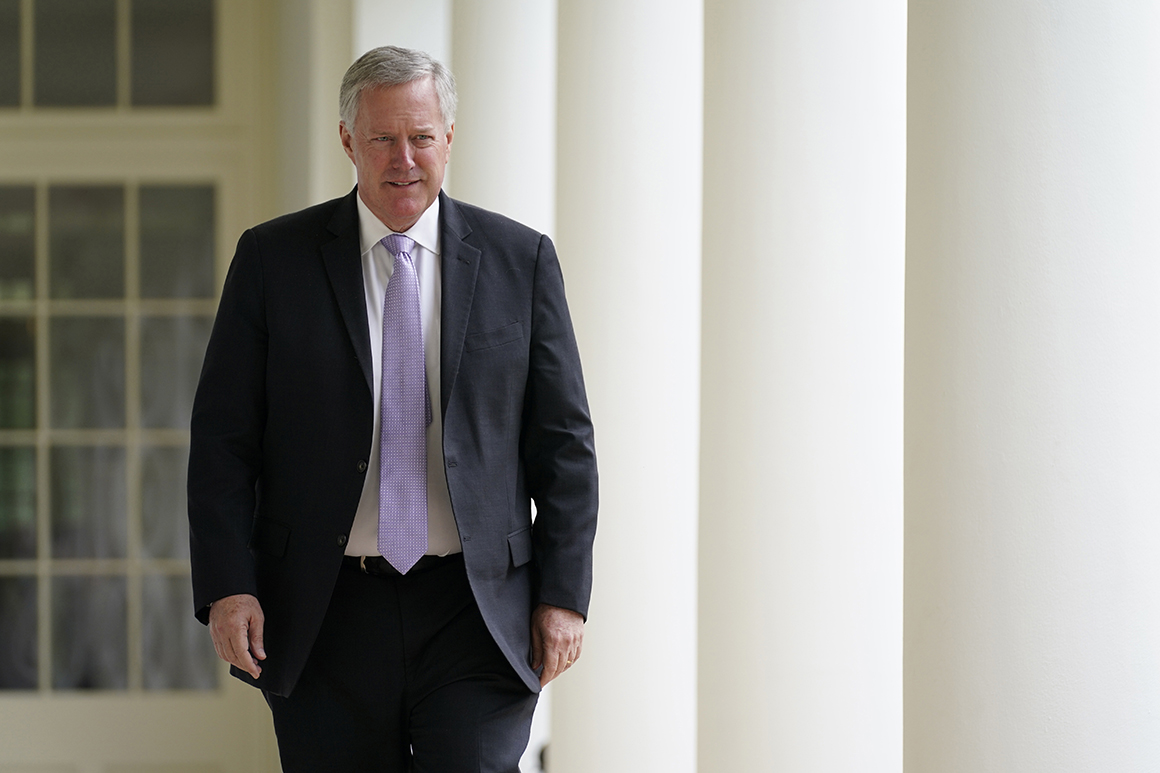 The White House is considering a trio of executive orders aimed at shaking up coronavirus relief negotiations with Democrats, a sign of frustration within the Trump administration at the sluggish pace of the talks with Speaker Nancy Pelosi and Senate Minority Leader Chuck Schumer.

The three actions under consideration would delay the collection of federal payroll taxes, reinstitute an expired eviction moratorium, and in the riskiest gambit of them all, extend enhanced federal unemployment benefits using unspent money already appropriated by Congress.

This plan is the brainchild of White House chief of staff Mark Meadows, and President Donald Trump on Monday night floated the idea of taking action on lowing payroll tax cut and evictions.

Treasury Secretary Steve Mnuchin told reporters Tuesday that the administration will consider executive action, and Meadows added, “Hopefully we’ll make progress today and not have to do that.”

Issuing the orders is aimed at shifting the power dynamics in high-level talks between the two top administration officials on one side, and Pelosi and Schumer on the other. But it may give embattled Senate Republicans a lifeline as they try to save their majority heading into Nov. 3.

The White House believes it could tap $81 billion in unspent aid approved by Congress as part of the CARES Act to offer states the ability to take advantage of beefed up unemployment benefits. Administration officials also think the Labor Department can loan state unemployment agencies additional money to boost payments to laid-off workers.

Under this scenario, states could offer anywhere from $200 to $600 per week.

Trump has openly speculated about whether he has the authority to take such sweeping actions, which could potentially set up a another huge legal battle with Congress over who controls the federal purse. Democratic congressional leaders have already sued Trump over his decision to divert several billion dollars in Pentagon funding to build a border wall between the United States and Mexico, but the decision to divert tens of billions of dollars in CARES Act funds to unemployment payments would be the most dramatic power grab yet.

The payroll tax cut deferral would be another aggressive gamble by the White House. The move would essentially cuts taxes for workers, who along with their employers pay to fund Medicare and Social Security. Trump allies, including economic analysts Stephen Moore, say Trump can take this action under the same authority that allowed him to postpone the filing of income tax until July.

And Trump — only 90 days away from reelection and trailing in the polls — has already shown he willing to push executive authority as much as possible.

“I can do that also through an executive order, so we’ll be talking about that,” Trump said at a White House press briefing on Monday night.

However, neither Democrats or Republicans on Capitol Hill have expressed any support for a payroll tax cut, arguing it could hurt Social Security and Medicare.

And Democrats have warned that they could bring a legal challenge on this issue as well, although there is no way it could be decided before Election Day, giving Trump what he likely wants — another campaign issue.